“It’s two guys, a guitar or piano, and a song,” says Bob Guiney. The former Bachelor star and current Today show panelist is describing the grassroots aesthetic of his musical partnership with actor Scott Grimes (ER, American Dad). They’ve been playing together for years with celebrity rock group Band From TV, which donates all concert proceeds to charity, but started touring as a duo under the “Guiney and Grimes” banner in 2012 to aid causes that can’t accommodate the larger ensemble.

“Band From TV’s such a traveling circus that it’s gotten to be quite the production,” Mr. Guiney chuckles. “What Scott and I do, we can do on a dime. We’re very excited to play and raise awareness and money for people who really need it and will do good with it.”

This week Guiney and Grimes will perform at Boston’s House of Blues for the Joseph Middlemiss Big Heart Foundation, which educates children about kindness, supports families in need and promotes research and awareness of congenital heart defects. Both foundation and fundraiser honor the legacy of 6-year-old Joseph Middlemiss, who died in September 2013 due to complications from cardiomyopathy.

There’s a lot of love around this event. Not only are Guiney and Grimes incredibly loyal to Boston and its surrounding communities (Mr. Grimes grew up in neighboring Dracut, and Mr. Guiney spent his 20s traversing Beantown with his band Fat Amy), but the real pleasure in attending a G&G gig is basking in the glow of true companionship between two talented artists.

“We both speak the same language—a love of music—and it enables us to truly get one another,” Mr. Guiney notes. “There’s a shorthand between people who love music and melody, lyrics, songwriting … That’s something Scott and I found right away as a major thread in our friendship. And we have very similar senses of humor; we really accept one another. Scott can say or do anything—it’s impossible for me to hate the guy.”

Onstage the pair vibes in sync as the two artists trade boyish quips in rapid time between lively tunes. Chalk it up to Irish heritage, but Guiney and Grimes create a pub atmosphere wherever they go, blending nostalgia, passion and generosity into one giant loving cup of an evening reliant on nothing but pure charisma.

“We think of ourselves as a poor man’s Simon and Garfunkel,” Mr. Guiney comments, though for me their originals bring to mind early Billy Joel—introspectively masculine songs centered on rich narratives that craft a contemporary sound from classic-rock elements. And don’t let the fellas’ breezy congeniality fool you; their works always resonate on a deeper level, inevitably shining a spotlight on what’s closest to their hearts (see “I’m Goin’ Home,” above, written in tribute to those affected by the Boston Marathon bombing).

Bob says, “We have such joy in hanging out together and playing songs and watching people respond to them … and ultimately what’s important is getting in there and hoping people pay attention and do the right thing [for the charities].”

As their live performances and forthcoming EP make clear, Guiney and Grimes are masters at celebrating life, cultivating from their own enthusiastic harmony a potent stimulus for widespread positive change.

Not bad for two guys, a guitar, and a song.

Guiney and Grimes play Boston’s House of Blues on Saturday, August 2; follow them on Twitter (@GuineyandGrimes) to learn more. For more about the Joseph Middlemiss Big Heart Foundation and its All You Need Is Love Mission, visit jmbigheart.org. 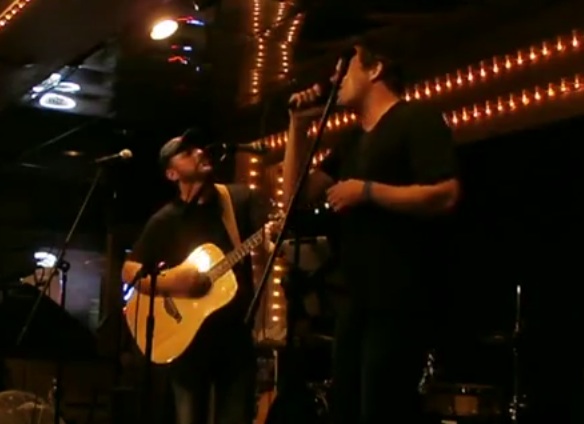