In “Landfall,” Halt and Catch Fire’s most engaging and well crafted-episode since the pilot, the expected results of MacMillan, Howe and Clarke’s extreme character flaws take a passenger seat to the overall arc and mythology of the show. Themes of self-discovery, identity and reflection are layered on thick throughout the episode, as a literal and figurative storm approaches. (Ed. note: Yeah, what’s with that these days?!) In the pre-credits open, we are treated to MacMillan lying and fucking at the same time, while dodging questions from Howe about his ghastly scars. The episode quickly rushes through the PC development plot and knocks out a few follow-ups to the side characters the writer’s don’t seem to care about anymore.

During the unveiling of the prototype, Cardiff’s team throws Bosworth a pity party and invites him to ceremoniously switch on the CPU.  Surprisingly, MacMillan stands there quietly, smiling like a quarterback who’s watching the benchwarmer play in the last 5 minutes of game.  As the episode progresses, the new, seemingly sympathetic and level-headed Macmillan begins to emerge.  Was the cutthroat sociopath personality a symptom of his entrepreneurial efforts? Is his attitude changing as the project get’s closer to completion?

The exploration of Macmillan’s human side was so long coming that it wasn’t believable or digestible at first. Invited over for a celebratory dinner at the Clarke’s residence, Macmillan is awkwardly stuck with Donna and the kids while Gordon is out being a bad father. The conflicting personalities of Macmillan and Clarke creates an environment where, if one of them is winning at life, the other is losing. The break-and-fix relationship that’s displayed in every episode between the two male leads takes a stranger turn as Macmillan builds a rapport with Clarke’s kids and provides some well-needed levity in the household during the heavy storm. Jokes are made and forts are built as we see MacMillan reverting back to his childhood experiences.

The crucial moment of what could be Macmillan’s turning point happens when he runs out of the Clarke’s house to ‘battle’ the storm, all while cleansing himself. The imagery is stark as we see his arms raised to the sky, embracing the force and the rain as we see what could be the shedding of his cutthroat façade. On the other side of town, the drunk degenerate of a father that is Gordon Clarke is facing the same storm with very different results. While the rain seems to absolve MacMillan, it only condemns Clarke. He stands there hopeless after just taking extreme measures to fix another one of his screw-ups, all while breaking the law and ending up face to face with a dead man. Standing there in shambles, I would say this over-the-top situation was brought on by the continuing use of the character’s many insecurities and bad judgment, but there was something far more sinister at play: The Cabbage Patch Kids.

During the height of the Folk art scene in the 1970s, a young artist and entrepreneur named Xavier Roberts began conceptualizing a doll that was heavily influenced by his mother’s quilt making. Named “little people,’ Robert’s took his creations across the country and sold bundles of the hand-made doll. By 1982, the doll had evolved and Roberts found a new home at Coleco, a struggling electronics and video gaming company. In the midst of the early-eighties crash of the gaming market, Coleco released “ColecoVision,” a popular gaming console that would help the company stay afloat. While the machine was innovative and well-received, it failed to gain traction due to the lack of gaming programs available to run on the console.  Wanting to do better than barely break even every quarter, Coleco decides to start mass-producing Xavier Robert’s doll.

This brings us to this week’s installment of Gordon Clarke’s down-on-his-luck misadventures. After drunkenly volunteering to pick up the new Cabbage Patch Kids for his daughters so he can get some ass, he fails to go to the toy store before it sells out. After being robbed by a conman outside a sold-out store, he gets a lead and drives out to a shop in the middle of the storm, only to find it closed. Clarke impulsively decides to smash through the front window and steal the dolls rested in the display. The polar opposite of what’s currently happening to MacMillan outside the Clarke’s residence, Gordon Clarke is experiencing his rock bottom. All while holding two of those coveted Cabbage Patch Kids, the famous dolls which kept Coleco solvent for about 6 years until the company eventually files for bankruptcy. Does this provide clues to what’s in store for Cardiff electric? After Coleco’s demise, Hasbro, Mattel and Toy’s’R’US licensed the dolls. This could very well be the eventual fate of Cardiff Electric. But what’s their “doll” to which they’ll pivot?

After the storm clears, we are left with some clarity about the motivations of Cameron Howe and Joe MacMillan. Even through their casual interactions, there’s a change in tone and behavior between the two, which could signal a more serious relationship in the coming episodes. MacMillan finally reveals that his scars are from an incident involving his mother and the sharp edges of a gate, and we learn that Cameron Howe discovered her love of programming in an empty computer lab.  The question of identity and the mystery of their individual pasts is starting to get answered, albeit much later than I would’ve liked. But if they are consistent with each character’s individual development, rather their tendencies for irrational behavior, I will remain invested in the show. “Landfall” was a unique, in that it relied successfully on the allegory and theme of identity and reconciliation. It was an improvement on the first half of the season, but I remain skeptical that the show will use this turning point and actually foster characters that people can relate to and sympathize with. 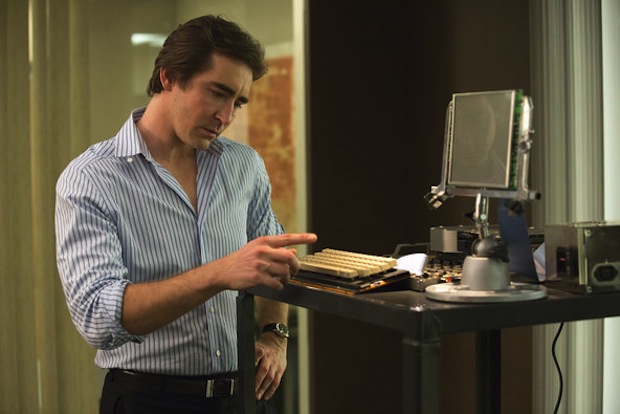