By now, anyone who doesn’t live under a rock knows Kickstarter and similar crowdfunding sites have hosted some interesting campaigns (potato salad, largest dick drawing, etc.)

These shoddy attempts to rake in the pledge dollars consist of try-hard puns, weird webcam rants and iPhone video montages. They all scream “amateur,” and — spoiler alert — most  of the campaigns don’t look like they’ll meet their goals.

1. Encourage a Love of Science: 8-year-old Wants a Science Room

Granted, helping a young girl hoping to be the next Marie Curie isn’t the worst way you could spend your money. But this young girl’s hopes and dreams don’t make the quality of her Kickstarter video any better. There’s someone else talking in the background of the bad iPhone video. Also, her poster reads “ASS GRAVITY.”

Next up is this video for “The Date Crate,” a box delivered monthly with a mystery date idea inside. It’s not the only webcam selfie video on our list, but it’s the only one that manages to use every cheesy webcam effect, from the thumbs up to the classic confetti explosion.

3.  Gas — A Hilarious New Twist on the Old Side Scroller

Yep, you guessed it. It’s a video game about someone with gas, and the creator claims it’s fun “because you need to fart your way through it.” This video is one of the more valiant attempts on our list, but it’s a pretty lawl-worthy and includes a preview of the even more hilarious game.

This hip hop artist says he’s raising money for a mic, so that should tip you off that the quality of this video probably isn’t too high. And by “probably isn’t too high” we actually mean, “definitely the worst on this list.” The audio is all kinds of messed up. If he can’t handle the sound on his own Kickstarter video, who knows what kind of damage he’d do to a hip hop song,

This unemployed college grad by the name of Alex Wong is using his free time to “bring back the goals of [his] youth” and crowdfund the world’s largest dick drawing. In this cringe-worthy homemade video, he narrates as he draws several dicks and discusses his love for the fine art.

It’s too perfect — this woman is raising money to learn to make better videos.  She’s wants the skills to document the life of her adorable pooch, Zoey, who recently passed. This one, though, might have some potential; aside from the fact that it’s an iPhone video montage set to corny save-the-day-type music typically found at the end of children’s movies, it’s not half bad.

7. The EFF YOU Shade

Is this a Kickstarter or a YouTube rant? This guy is looking to raise a few thousand dollars to produce shades you can quickly pull down over your car window to “express yourself” AKA curse out other drivers. That’s how it seems, anyway, based on the product’s name and the fact that the video consists only of the creator venting his recent rode rage frustrations to his webcam.

In this video, four minutes of silence and awkward hand fidgeting is preceded by 20 seconds of shaky footage of a hallway and vacuum audio. Let’s just say it’s a strange transition. It’s actually unbearable to watch.

Brought to you by a bro still reminiscing about college (who is exactly the kind of guy you would guess is behind this invention) is another valiant homemade video attempt. It’s very informative and the production isn’t half bad, but oh the puns! You hear the phrase “dirty balls” enough for two lifetimes in this video.

This one was actually on Indiegogo and has been over for quite some time (Betabeat already got our Autoblow 2 in the mail), but we can’t pass up one last opportunity to talk about this viral campaign. We discussed the pre-sale that crashed the product’s site and even the stigma of male sex toys, but we haven’t paid much attention to this noteworthy video. It’s certainly one for the books. We won’t rag too hard though, because how could anyone make a serious video about a blow job machine? 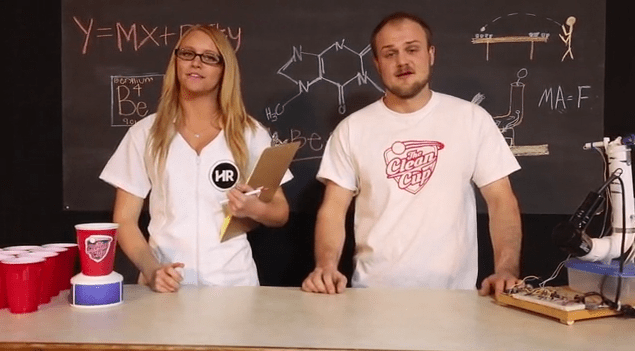