Yesterday there was this meme where you could look up your own Uber rating, see what the DRIVERS thought of YOU.

When I first heard about this, I was deeply offended. I was like, “wait WTF, so I am paying all this money to be judged?!”

I am still pretty pissed about it, I think I am going to switch to Lyft. That way, I don’t have to be analyzed, I can just fist pound with my bruh-bruh. I am not a piece of meat, I am a human being! I think it is pretty shameful that Uber even lets the passengers judge the drivers, but whatever, at least I am paying to objectify this dude.

Even for passengers rating drivers, I don’t think that your rating should count unless you are an “Active Uberer”, using the service and rating drivers all the time. The same way Yelp does it. Don’t let some occasional, willy-nilly Uberer ruin a perfectly good driver’s day!

Furthermore, I don’t think your ratings should count if you are repeatedly giving bad ratings. If someone drops a bad rating more than, say, once a month, then there is some venting going on, and their spiteful ratings ought to be ignored. To be perfectly honest, I bet you that 90% of people who have ever given a driver a bad rating are total assholes.

Finally, I think Uber should pay me a consulting fee for the knowledge I am dropping here. I am out of work and desperate for money—I am thinking about becoming an Uber driver in fact…but the only thing that is stopping me is I don’t want strangers to be allowed to rate me.

I’ve never given a bad rating. I have given 5 stars for every single Uber I’ve ever ridden. Even if the driver sucks. I think of it as the driver’s reward for dealing with my cattish, bossy attitude during the ride. Also, I don’t want to be the little bitch who fucks with homeboy’s shit, fucks with his livelihood. Live and let live dogg…I figure that—if he is indeed a bad driver—KARMA will catch up in the long run, word to Jehovah.

Although I suppose that in general the driver ratings are “good for passengers” or whatever, they still make me feel dirty because the drivers get all ass-kissy and sycophantic. I can sense dude trying to earn the rating, and this way I never know if he actually likes me for me…

When the driver’s hurriedly stumbles out of the car and rushes to open my door, even though I am perfectly capable of opening the door myself, my heart sinks and I realize how much I hate capitalism.

Anyways, I didn’t look up my own Uber rating for several reasons:

Going forward, I think I’ll be taking Uber a lot less now that I know I am being rated. The rides will be petrifying, anxiety-ridden. When the driver gives me the , should I drink it? Will drinking it lower my rating because homie needs to go to Costco and get more waters? Will not drinking it lower my rating because homie thinks I am a dehydrated loser?

What if everyone could rate everyone else for everything? There was the Lulu fad for a second, where girls were rating me. I didn’t mind that so much because I got a wayyyy higher rating than my Genius co-founder Tom Lehman (pictured below):

It wasn’t even close—I was, like, a solid point above him.

Also, I didn’t mind Lulu ratings because they came with instructive hashtags on how I could improve. It was like, “OK, I understand now, you gave me a 4.2 because I am a #manchild—I see, I will tell my therapist and try to work on this…”

With the Uber rating, I would be left wondering, “What did I do wrong?” I bet the drivers feel the same way.

UBER: give me some hashtags to choose from when I am rating the driver! Allow me to communicate to him that he has a #weirdairfreshener. Permit me to inform him that the #backseatstains make me paranoid of who has sat here before me.

The ethical questionability of ratings gets to the heart of why I loathe the service economy in general. The service economy is part-time slavery, str8 up. I never get massages or shit like that cause it makes me feel guilty. I lay on the table and feel sorry for the person who has to rub me and I’m unable to enjoy it. I used to even cut my own hair—but I had to stop, because the back of my head looked all crooked and fucked up…also it was too depressing to sweep up my own hairs—sometimes, I wish I could go back tho.

Mahbod aka @mahbodmoghadam is a really funny tweeter. He is a co-founder of Genius and the author of the forthcoming book “Genius Inc.” 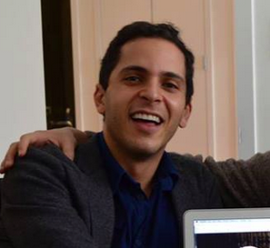