TRENTON – She might have been his first priority, but Assemblywoman Bonnie Watson Coleman (D-15) wasn’t the only New Jersey congressional candidate House Democratic Whip and U.S. Rep. Steny Hoyer (D-Maryland) stumped for yesterday.

He also turned up at an event for Burlington County Freeholder Aimee Belgard, the Democratic contender in CD3 facing Republican hopeful Tom MacArthur.

In a phone interview today, Hoyer explained his support for the two candidates — as well as a few others in congressional districts throughout the state who are looking to elbow out Republican incumbents or else snag open seats come November.

First, he reiterated the praise that accompanied his endorsement of Coleman at the Communication Workers of America local 1039 in Trenton yesterday.

“First of all, Rush Holt’s been an outstanding member of the house in my view, and performed excellent service for his district and for the government of New Jersey, and we think that Bonnie Watson Coleman is a perfect successor to Rush Holt,” he said. “She has the intellect and the experience that she brings to this job … and she’s demonstrated in the past an ability to work across party lines and ideological lines to reach consensus to get things done, and I think that’s what the American people want and I think that’s what the people of New Jersey want and certainly what the people of the 12th district want.”

He called the Assemblywoman’s primary race against state Sen. Linda Greenstein (D-12) and Assemblyman Upendra Chivukula (D-17) “spirited,” and said he’s already made not one, but two monetary contributions to the Democrats’ campaign.

“I think what representative Coleman showed was that her past experience and her ability allowed her to win, but the other candidates … were very competent people and would have made good members of congress as well,” he said. “But we have a system in which the voters select the person through which they feel they’d be best represented, and that’s what happened. Representative Coleman had an impressive victory.”

Hoyer said he also made a contribution to Belgard’s campaign yesterday, and talked highly of her prospects in a race against district expat MacArthur.

“We think [Aimee] is one of our best candidates and one of the best opportunities for a pick up of the Democratic seat now that Mr. Runyan has retired,” Hoyer said of the outgoing Republican. “So that’s an open seat, and the person she’s running against of course is from Northern New Jersey and his principal residence is in Northern New Jersey, and I think the people of Southern New Jersey know that, where Aimee has been a local office holder, has lived here all life, knows the people, knows the issues. So I think she’s going to be a strong and winning candidate in that district.”

Hoyer’s support comes with the unspoken blessing of the Democratic Congressional Campaign Committee (he’s campaigned on their behalf a number of times before), which means the Congressman’s movements this week might serve as a heatmap for where the party’s priorities lie in the November general election. Belgard is certainly on that map: she’s vying against MacArthur for a seat left vacant by U.S. Rep. Jon Runyan (R-3), and has a home turf advantage after serving as a local freeholder in the district.

By that logic, Coleman is too. She’s well-funded, has the political backing of a number of well-connected lawmakers in Trenton, and, like Belgard, finds herself in an open seat race against a relatively obscure Aelita Eck, a Somerset lawyer.

And that could leave state Sen. Donald Norcross (D-5) as priority number three: he’s the only other Democratic candidate in the state fighting for an open congressional seat, in his case against former Eagle Gary Cobb in CD1.

The other two Democratic congressional candidates in the state — Bill Hughes, Jr., who’s running against CD2 incumbent Frank LoBiondo (R-2), and Roy Cho, running against CD5 incumbent Scott Garrett (R-5) — are less certain. Neither are expected to have the funding nor name recognition to boot their Republican opponents off their seats, but Hoyer says he still holds out hope.

He said he served with Hughes’ father, former congressman Bill Hughes, Sr., on the House Financial Services Committee in the 80’s. As for Cho, he says he’s “frankly” never met the guy.

“But I’ve heard some very good things not only about his ability but the prospects that he has,” Hoyer added. “Now that’s a tough district, but we think he can have a very good race and quite possibly a winning race.”

In the end, Hoyer said, it’s about getting more blue shirts into an increasingly dysfunctional House of Representatives.

“We need to get Congress working effectively, because it’s not working effectively now. The Republican leadership has shown itself unable to marshal majorities of its party for rational effective policies,” he said. “They shut down the government, they threaten with debt the creditworthiness of the country, there’s been no jobs legislation, and as a result we think they need new leadership and we think Bonnie Watson Coleman as well as Don Norcross and Aimee Belgard and Bill Hughes Jr., and I’m sure Roy Cho — would all bring a perspective that would be a much more positive one than we have seen by the Republican majority.” 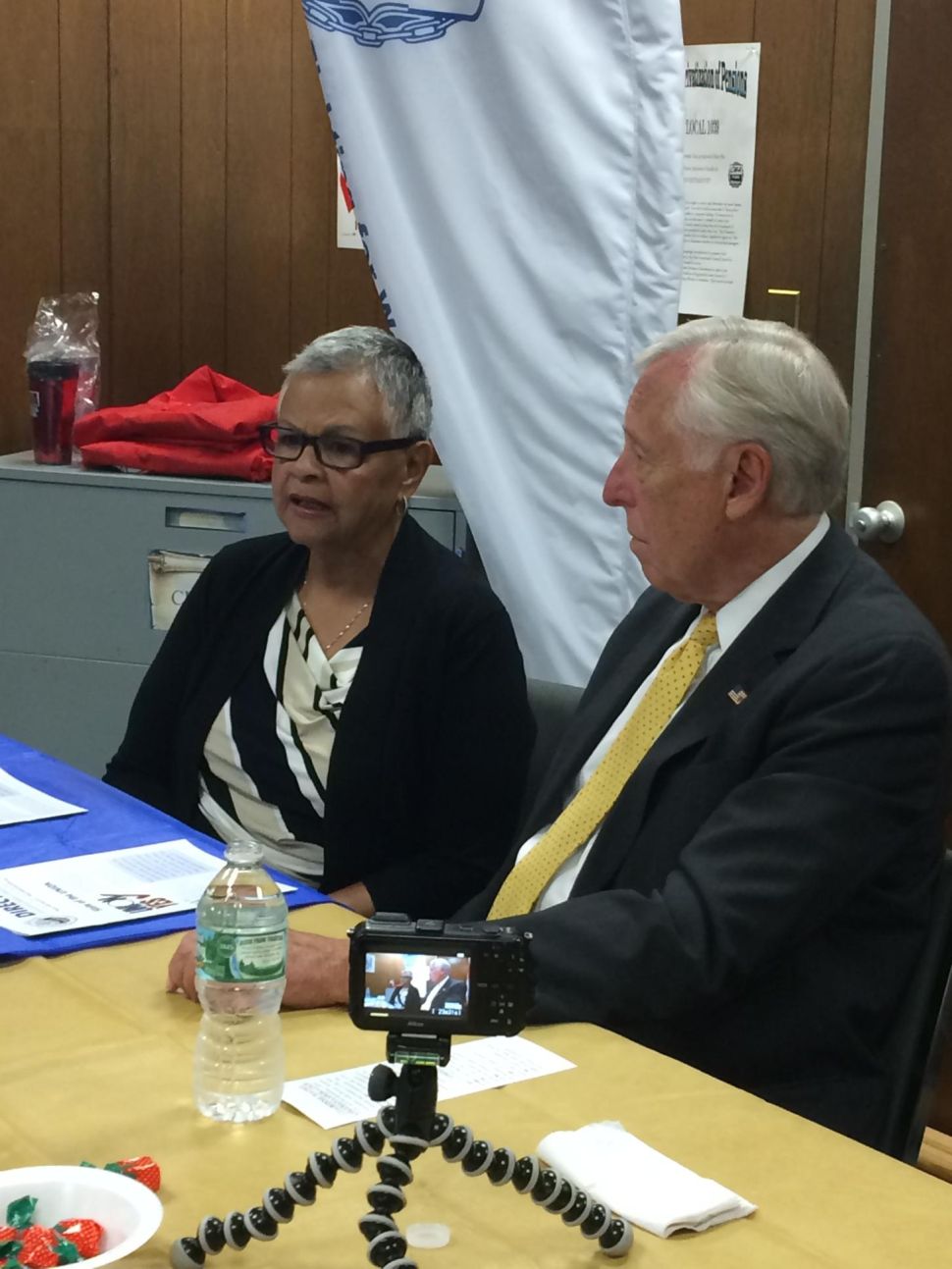