To help alleviate some of that sense of loss, I decided to go hypothetical, and recap exactly what I think the series finale of How I Met Your Father would have been like. It was cathartic for many reasons. Here we go:

Our main character for the past ten years of How I Met Your Dad, Ted Momsby, sits as she always does at a desk facing her children. A single fan sits on the desk, blowing in her face. I immediately recognize this as part of a recurring, yet confusing joke, where there was way more fans back in Season 2.

(Sidenote: even ten years later I’m still not sure about Mr. Thomas and Mr. Bays just recycling the name Ted for this show. I also still find keeping Bob Saget on as narrator for our female protagonist an odd choice. But I digress).

“And that, kids, is how I met your dad,” Ted says, very seriously. “And just because I only knew him for a brief half hour in the back of that Prius, and he left immediately afterwards never to be seen again, doesn’t mean I love him, or you guys, any less.”

“That’s it?” Ted’s daughter asks. “I don’t buy it. That is not the reason you made us sit here for the past ten years, denying us food, , or a basic education.”

“No, kids, I sw…” Ted tries to get out but his daughter, always the feistier of the two, interrupts.

“Dad, we know the truth, and it’s okay,” she says. “You’ve spent the majority of the past ten years telling us how you were fucking Uncle Robin, and while it has made us extremely, extremely uncomfortable, we get it. You’ve loved Uncle Robin ever since you met him at that bull riding contest, and you have ever since.”

Ted stammers out some sort of half-hearted denial, but his children assure him that they are totally okay with their father always being a sloppy second option. Ted smiles knowingly, and runs off. His children both sigh.

“You know, I haven’t gone to the bathroom in nine straight years,” Ted’s son says, and proceeds to relieve himself all over the base of the desk fan. This struck me as odd, because that fan has always been a constant no matter how suspect this show got. I don’ think I condone the decision to just piss all over that devoted fan base, especially in the show’s last episode ever.

Ted finally arrives at Uncle Robin’s window. She calls up, and Uncle Robin sticks his head out. That’s when it happens, the moment that everyone will remember from this series finale for years to come.

She pulls out an object that only she and Robin would understand. Robin recognizes it immediately, and bursts into tears. It is an inside joke, shared between two people who were destined to be together from the start. It is a both a metaphor for their entire relationship, as well as a symbol of their undeniable love and attraction. It is a token, a memory from their first meeting all those years ago at a bull riding contest, that has transcended it’s physical state to become a representation of Ted and Robin’s inevitable coupling, and this show as a whole.

It is a big, giant bucket of bull shit. Fade to black. 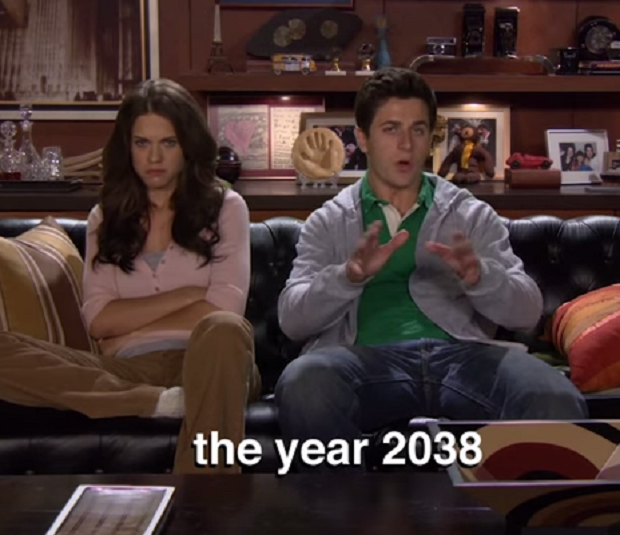 Filed Under: TV, recap, cbs, How I Met Your Mother