The Salty Pimp is one of the biggest hustlers in the Instagram game, but this heavy shot is more commonly associated with gluttony than sleaze.

The icon is no criminal, but an ice cream cone offered at the Big Gay Ice Cream Shop. Actually, “ice cream cone” is an understatement: it’s a heavenly combination of vanilla soft serve, dulce de leche and sea salt, all dipped in a perfect chocolate coating, and it’s one of many examples of how the pure delight of an ice cream cone has gone from a momentary thrill to a lasting memento.

What was always a favorite summer treat has become a popular social media subject, and many New York ice cream shops have this trend to thank for turning their stores from a sweet pit stop into a destination.

Recently, Instagram feeds have overflowed–sometimes to a frosty reception–with snapshots of carefully plated dishes and enticing baked goods. But photos of perfectly formed scoops and swirls have perhaps gotten the most attention, many with captions including @icecreamofinsta (the account, founded only two months ago, has amassed 6,000 followers),  #EEEEEATS (the hashtag of the New York food blog Infatuation, whose Instagram account boasts over 100,000 followers) or, maybe the most telling, #eatingfortheinsta.

“We have celebrated the ice cream shot, for sure,” said Andrew Steinthal, cofounder of The Infatuation, who added that ice cream Instagrams are highly “reactive,” garnering many likes and comments. “Ice cream is delicious. It’s something everyone likes to hold like a trophy.”

Mr. Steinthal attributes the icy treat’s Instagram hotness to many factors, particularly the dessert’s universal appeal.  “I don’t think I’ve met someone who doesn’t like ice cream, and if there is someone out there, they have problems, unless they’re lactose-intolerant, and that’s just sad.”

A good ice cream portrait goes far beyond a simple scoop in a cone (or, God forbid, cup). Mr. Steinthal noted that the best shots feature creative backgrounds, colorful flavors or unconventional toppings. And Carly, a founder of @icecreamofinsta, suggested a manicure before taking a winning shot and, of course, the perfect filter.

But it’s not the photographers posting the pictures who benefit most from this craze. Through geo-tags and localizing captions, ice cream hot spots have emerged—many of them thanks to the photogenic quality of their cones, shops and toppings—making places like Emack & Bolio’s, Big Gay Ice Cream Shop, Oddfellows, Morgenstern’s and Sundaes and Cones the real winners.

Emack & Bolio’s, a relatively non-descript ice cream shop linked to a Boston-based chain, has been open in Soho for nine years but had more-or-less flown under the foodie radar, with owner Robin Mendelwager noting that many people didn’t know the shop existed.

Until, that is, someone Instagrammed one of Emack’s signature oversized cones dipped in hot marshmallow and rolled in fruity pebbles—the colorful extras a key component to a successful Emack-agram.

Now the ice cream shop is an attraction, and a photo of one of their ice creams can garner over 1,000 likes.

“Emack & Bolio’s (is) by far the number one (example),” said Mr. Steinthal regarding shops that have gained a following because of Instagram, in this case thanks to their unconventional cones.

And, according to the numbers, the cone business is booming. “People come in and have a picture of a cone one of their friends got and they say ‘I want that cone,'” Ms. Mendelwager said. Business has been particularly good this summer, which she partly attributes to the extra cost of cone over cup.

Douglas Quint, a cofounder of Big Gay Ice Cream, is also quite familiar with the trend.

“People take photos of ice cream the moment it lands in their hands, even on the hottest days. And sometimes I’ll yell at them, ‘Go eat it!'” Mr. Quint said, lamenting the melting ice cream.

With its sassily named cones—American Globs, Bea Arthur—and a Swarovski crystal covered unicorn on its rainbow wall, the Big Gay Ice Cream Shop has been popular since it opened its doors in 2011.

But recently, the shops—one in the East Village and one in the West—hit a whole new level of fame: The cones have become Instagram icons, with many customers on the almost-perpetual line saying they first heard of the shop through the app.

Founded in 2009 as a truck during the height of the Twitter-boom, the store has always embraced social media. But as Twitter-use died down, Instagram allowed for a “rebirth of engagement” with customers.

“I probably should post more photos of ice cream on our Instagram feed, but I’m around the ice cream all the time,” Mr Quint said.

Unlike Mr. Quint, the masses never get sick of it, and the Salty Pimp has become a household name—at least in certain downtown households and among those who follow the New York Insta-food scene.

“Something about soft-serve…” Mr. Quint mused regarding its popularity. “It’s drippy. It gets a little bit pornographic, kind of quickly.”

The recipe for frozen fame doesn’t necessarily rely on a cone. A Melt Bakery ice cream sandwich is sure to be a social media hit—particularly if the cookies are red velvet. Ralph’s, an Italian ice shop in the East Village, serves up the city’s most like-generating, colorful ices. And Holey Cream stuffs ice cream into donuts—a photogenic and gluttonous combination—to create #Instagold.

These new social media stars—many of which are twists on a humble classic—may have some fearing a threat to taste in favor of neon scoops and kitschy toppings.

But they need not be too concerned. @NYCfoodgal‘s good old-fashioned Mister Softee with sprinkles got over 2,000 likes last week, proving some tastes will never change. 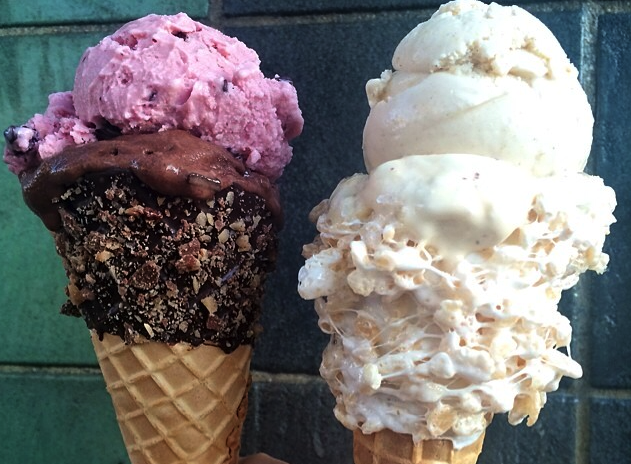