The author of Jewish Literacy and a dozen other terrific books, Joseph Telushkin is the boss of what matters to Jewish people. Think about that for a second: A guy who settles arguments for a people who love to argue. His new book, Rebbe: The Life and Teachings of Menachem M. Schneerson, the Most Influential Rabbi in Modern History, has just landed on the New York Times bestseller list.

You grew up here, in a rabbinical family. Yeah, I grew up in Brooklyn, what’s called now the Midwood area. When I was growing up it was called Flatbush. My father was an ordained rabbi but he earned his living as an accountant. And among other things he was an accountant for several major Jewish organizations, one of them being Chabad. He was the accountant actually for the Rebbe. And for the previous Rebbe from the time he arrived in America in 1940. My grandfather was a well-known rabbinical scholar with whom I had a very close relationship. And I went to the Yeshiva of Flatbush.

You mention running the streets with friends like Dennis Prager, the radio host and your occasional co-author. Dennis and I became friends when we were 15. We both went to the Yeshiva Flatbush. And we became very close. Neither of us were great students. We had a class of 110 students. I was 83rd and Dennis was 92nd. But we both really had a love of reading and studying. I sort of knew in my high school years that if I devoted eight hours a day of my life to the study of chemistry it was not going to do the world of chemistry any good. I had a great love of history and of reading in general. So that’s what I did.

You’re best known for your Jewish “reference books,” but I came upon your work through your musings on Jewish humor. See if you can tell me a joke I haven’t heard. I used to tell one that’s incredibly offensive. A young Jewish woman takes her grandmother, who’s very unworldly, to see a movie, one of those Cecil B. DeMille spectaculars. They have a scene in the Coliseum where Christians are put into an arena with lions, and the grandmother starts howling, and the young woman says, “Grandma, Grandma, what’s the matter? Those people are being killed.” The grandmother says, “No, no, it’s a movie, they’re not really being killed.” Then a few minutes later the grandmother sees a lion walking around and starts wailing again. “You see that lion over there, he’s not getting enough to eat.” I screwed up the joke, the way I told it. The joke is so anti-Christian and offensive—guaranteed to stir up a pogrom. And because I never tell it, I ruined it.

So you’ve wandered a bit before returning home. Yeah, I lived for seven years in Los Angeles, from ’77 to ’83, then I lived for three years in Israel. And then a number of years ago, from ’94 to ’96, my wife and I, with our children, who were then very small, spent two years in Boulder, Colorado. We loved the idea of Colorado, had gone there for something one summer and had very much liked it. And I’ve earned my living writing books and lecturing. So as long as I have access to an airport [I’m fine], and Boulder is quite near to the Denver airport. We ended up coming back to New York, one reason being my father was no longer alive at that point and my mother was here by herself. And another reason being that we needed our children to have a more in-depth Jewish education than was going to be available for them in Boulder.

You didn’t grow up in the Lubavitcher movement but your father’s closeness to the Rebbe and your own exposure during this book seems to have swayed you a bit. I want to be very careful, I suppose, in how I phrase this because I don’t want to come out like some starry-eyed, highly naïve person. But the rebbe seemed to have access to things that were just extraordinary, beyond belief. He had a bigger access to wisdom that I can’t account for. [Once he met] with the writer, the novelist, Harvey Swados, who had written a book called On the Line, on worker discontent and stuff. The Rebbe said to him, “Do you write in the style of Upton Sinclair?” The Rebbe had grown up in Russia, didn’t come to the United States until he was almost 40. And then he meets with Gordon Zachs, who was a very generous Jewish philanthropist but not a really traditionally observant Jew. The Rebbe is challenging him to try observance and Zachs sort of wanted to be convinced of its relevance. The Rebbe starts quoting to Zachs from Zorba the Greek in which Zorba challenges a college student who’s very widely read and says, “So what’s the meaning of life?” And the kid says, “I don’t know.” And Zorba says, “Then what good does all your reading do you?” He would constantly point out things in scientific papers that he had read. He would catch errors. So his knowledge seemed very widely based and his memory seemed quite extraordinary.

Tell me about meeting the Rebbe. I had only had one meeting with the Rebbe. I wasn’t raised within Chabad. I went to the Yeshiva Flatbush, which was a modern Orthodox, very Zionist day school. The Rebbe was a non-Zionist because of its secular roots, but he was passionately supportive of Israel, passionately concerned about Israeli soldiers for whom he held the highest esteem because they were daily saving the lives of Jewish people. So I grew up in a Zionist household but my father worked at Chabad. He was probably there an average of one day a week. My grandfather had these strong ties to the Rebbe. So when I was going into my junior year in college and chose to spend the year studying in a yeshiva in Israel. My father and grandfather were having a meeting with the Rebbe, and I came along. And it was wonderful, but the meeting was conducted in Yiddish, and my Yiddish is very, very weak. But at the end the Rebbe gave me a brucha, and I was struck by the sort of grandeur of the man. Obviously, if I had known that almost a half a century later I was going to be writing about him, I would have taken comprehensive notes.

The Crown Heights riots that pitted the black residents against the Jews must have broken the Rebbe’s heart. The riots happened before the Rebbe’s stroke. The meeting that the Rebbe had with Mayor Dinkins is actually a very moving scene. The Rebbe prayed for peace in the community. And Dinkins interjected and said, “For both communities,” and the Rebbe said, “No, they’re both one community.”

Tell me about your other books. I wrote a novel years ago called Heaven’s Witness which is about reincarnation and the solution of a crime. It was optioned by CBS for a TV movie and my co-writer and I were actually paid to write the movie and then they stopped these weekly movies. I also did a memoir with a wealthy person — Danny Abraham, who created SlimFast.

Last thoughts? Get Ron Perelman to review my book. I’m joking, but you know he has these very strong ties to Chabad. There’s a rabbi in Philadelphia, Avrohom Shemtov, who’s one of the really senior people in the movement, who tells me that for a period now of about 25 years, every morning he and Ron Perelman study something from the Torah over the phone. 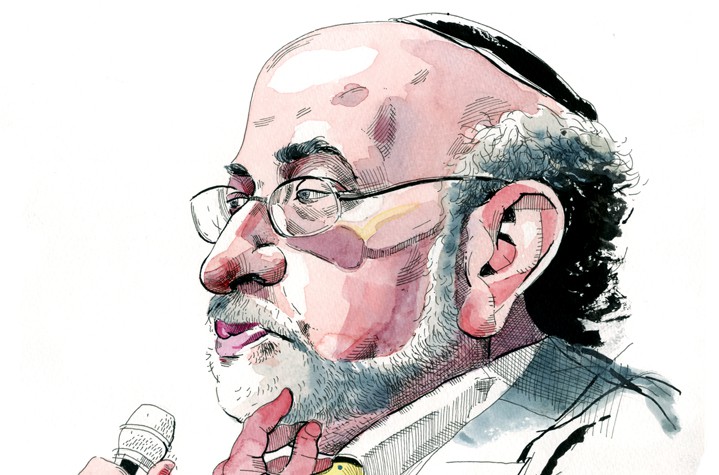