A pretty spot-on summation of this episode’s vibe. (Screengrab via E! Online)

TV families often go on vacation when they’ve run out of plot ideas. Tony Soprano and his “family,” you’ll remember, once ventured to the old country. The Bradys visited to the Grand Canyon. Even the Mertzes and Ricardos packed it in for a season-long California road trip.

On those shows, though, the families didn’t despise each other before the trip even began. This week, the Kardashians broke the mold by not only going on a trip to far-away Thailand, but also being miserable the entire time.

Despite the overtones of malice, this episode at least favored its audience with original and unexpected plotlines. The only recycled meme was Kim’s decision to make a “selfie-book” for Kanye. It echoed Khloé’s bizarre sexy bunny dance from season four, which she performed on video for her travelling husband Lamar.

So let’s start with the selfie-book; it’s a good jumping-off point for the brutally sad scene in which Kim announces to her sisters that she’s landed the Vogue cover. She reminds her sisters: remember that day when I wasn’t answering your texts? You were all so worried about me? No one knew where I was?

Blank stares all around.

Well, she tells them, I was shooting the cover of Vogue.

Crickets. Her sisters stare daggers at her.

“American Vogue,” Kris ventures. From her shit-eating grin, the other sisters glean that she posed in a shot, too.

Kim, looking devastated at everyone’s hatred of her as she spills this news, starts to show photos to her sisters. As she gabs about the different designer wedding dresses she got to try on, her sisters look more and more pissed. Not even the little ones are happy for her. They’re seething.

“Remember when Kim did K9 Magazine?” Khloé spits, breaking the silence. At this point, I actually hoped that this plotline was fabricated to trick the audience into feeling bad for Kim, because no sisters should ever be this cruel to each other.

“I’m so proud to have you as my sister,” Kourtney says sarcastically. “They want me to do Natural Health magazine, how do you feel about that?”

After this horrid display, we get to watch the family enjoy an over-the-top luxurious vacation because sometimes, honey, bad people are rewarded with good things. No, I don’t know why.

Oh, wait, sorry, first there’s a scene when a dubious character named Dr. Boris gives the family a round of tetanus shots in the kitchen. First we watch that. Then we watch them take SUVs to their first-class flight.

Kourtney’s not coming because Mason has double ear infections. Valid. Rob is also not coming — but no one seems to care except for Khloé.

“Now Khloé wants to cancel,” Kris kvetches, apparently forgetting she also has a son who is not doing too well. “And this isn’t the way I want to start my vacation.”

Khloé screws up her courage and decides to go on vacation; if she doesn’t go, she says, “it’s gonna be a domino effect of people not wanting to go and complaining.” She is a martyr.

When the family arrives at the hotel, they traipse around taking in the overstated glam that surrounds them. It’s a real departure from what they’re used to. At the very least, their own homes don’t have this hotel’s mushy moon-floors (yet).

The first words out of Kim’s mouth are, “I do need a selfie of me.” This is the beginning of a drawn-out storyline wherein her assistant is forced to take selfies of her so that she can make a “selfie-book” for Kanye. Her sisters are really pissed for some reason? It all comes to a head when Brody walks in and sees Kim vamping in a see-through wet white dress. Womp womp, embarrassment trombone.

He then crassly refers to Kim as having been “in a see through white dress, ass out, tits coming through, the whole nine.” Charming. Leah accuses him of having been turned on by his step-sister; I believe she uses the term “half-chub.” Is this what happens when you raise your children in southern California?

At another point in the show, Bruce has finally noticed that Rob has been skipping a lot of family events lately; perhaps he “has, like, deep issues”?

“We’ve offered him help and he won’t take it, so I don’t have sympathy,” Kim hisses. Jeez, just when we were starting to root for her.

Meanwhile, Kris has a diabolical plan (doesn’t she always?) to get estranged husband Bruce out of her hair: she’s invited a smattering of his kids from a previous marriage to Thailand. She figures he will pay attention to them.

When Brandon, Brody and Leah arrive, Bruce wants to take them to do outdoorsy things. Kris obliges. They go ziplining together, with Bruce and Kris going down the zipline at the same time but, oddly, not touching. It’s a pretty good metaphor for their current situation: no longer romantically entwined but still just kind of hanging out platonically 24/7. So, fun excursion!

Kim is too scared to zipline, but Bruce won’t stop goading her into it. Finally she flips out and explains that now that she has a kid, it’s not worth it to swing from tree to tree without knowing who the hell built this contraption and whether you can even pursue a personal injury lawsuit in Thailand.

Then, some crazy shit happens: Bruce and Kris get into a car crash! They’re fine, though. Kris somehow finds a way to blame Bruce despite the fact that he was just a passenger, soooo, all is right with the world.

Bruce and Kris continue to fight. This is a weary load they’ll be toting for the rest of their years on this earth. I feel bad for them. I don’t even remember what they were fighting about. It’s not relevant, really. Kris complains that she “just want[s] to go on a vacation where we relax.”

“You go to Cabo with your girlfriends,” Bruce says, in peak dad form.

“He’s driving me crazy because he wants to have a schedule,” Kris says. “My plan is not working.”

They keep bickering. It’s sad. Kris apparently doesn’t realize she and Bruce are the ones making the vacation miserable. It’s not Bruce’s schedule’s fault. When did everyone in this family start loathing each other so much? Can’t people just put their differences behind them and get along, if not for the sake of the children (that went out the window a long time ago) but for the sake of their usually-fun-to-watch TV show?

Then, Kendall announces, “I’m over it,” and the episode ends. It was a rocky road — but hey, at least KUWTK can acknowledge that sometimes, large-scale family vacations can be drama-filled and miserable, despite everyone’s best efforts. You’d never get that kind of truth bomb from The Brady Bunch.

And the Kardashians still have a few more vacation-centric episodes during which they can put aside their differences and just relax. Tune in next week as Brody lies in wait, ass naked save for a strategically placed codpiece, grinning maniacally while waiting for his step-sister to discover him. Can’t wait. 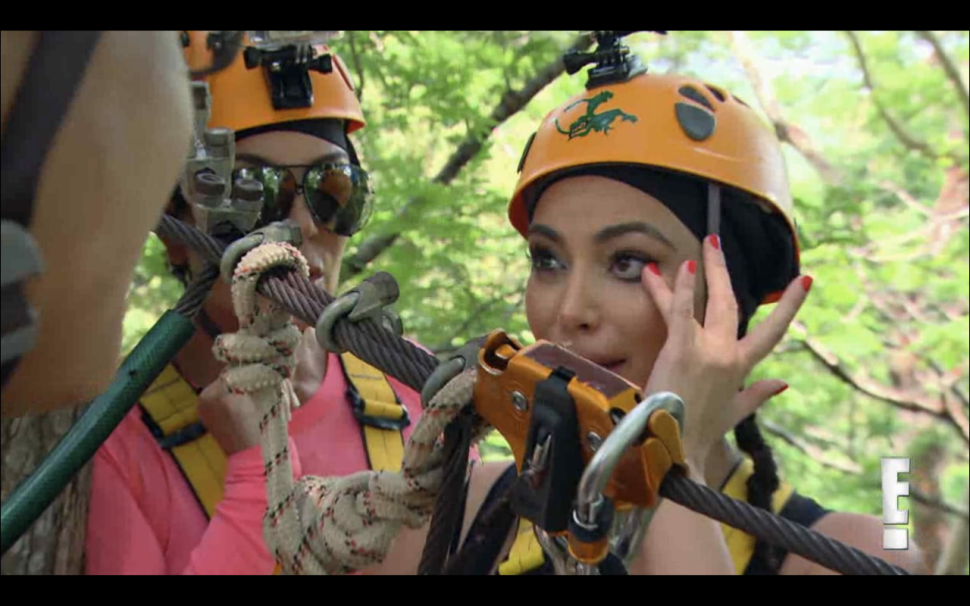