Our attention is divided between two plotlines in this week’s episode of Keeping Up With the Kardashians. Kim and Khloé are running a race against each other, and Scott wants a helicopter. (Yes, it’s the same plot as when he wanted an office van except this time: helicopter.)

The show opens with Khloé torturing her nephew Mason. “That’s my son,” she roars before lifting her nephew into the air and threatening to throw him into the fireplace.

It’s disturbing, hearing this cheery little boy erupt in the Kardashians’ patented nouveau Valley Girl speak. The implications are vast. What will he say next? “I’m ledddddderally dead”? “That crop top is en fuegs“?

Next, Bruce, Scott and Mason are having a cute boys-only powwow over brunch. The top of Bruce’s head is an actual bird’s nest. Scott tells Bruce he’s thinking that, now that he and Kourtney own an obscenely huge house on an even bigger piece of land, he should probably get a helicopter pad.

“You can’t be a spectator in life,” Bruce tells his de-facto-son-in-law. “You also have to be a participant.”

Kim and Khloé are driving in Khloé’s SUV. They vocal-fry their way through a conversation about North, the top of whose head will grace us with its presence in a later scene. They’re heading to pick up long lost brother Rob for a workout.

The two sisters have decided to compete against each other in a Mud Run, we learn. That is not an über-luxe colonic, but a 5K running race where sometimes the surface you’re running on is mud. They’re currently “training.”

They arrive at their chosen workout spot — a thicket of solitude with some greenery and stone steps — and Rob starts complaining immediately. Kim and Khloé do some squats while he hovers over them.

“This is the dumbest workout class I’ve ever seen,” he says while snapping close-up photos of their squatting butts.

Kim reveals that she’s visited a psychic, who told her Khloé cries herself to sleep at night.

“She could have Googled that,” Khloé retorts.

“I’m gonna get pregnant soon,” Kim continues. Kim already has one kid. Khloé has struggled to conceive in the past. “She said you should get a sperm donor and the guy will come later.”

Scott unveils the new plan to Kourtney: he’s going to keep a chopper in the backyard, just like Leonardo DiCaprio in the gritty documentary film The Wolf of Wall Street.

“I’m into anything luxurious,” he explains in a confessional, as if he were the first nouveau-riche bro to want a helicopter in his backyard.

Kourtney and Kris then go shopping, and Kris insinuates that maybe the helipad is not such a chill idea. Kourtney then lets rip some brutal opinions about Kris and Bruce’s marriage, in her cruelly vacant way. She basically blames Kris’s bossiness for the couple’s separation.

See, Kris made Bruce get rid of his airplane and extra house in Lake Tahoe when they began to breed.

“We had four kids to take care of and two more on the way,” Kris says. She has a point.

Still, Kourtney basically says she’s letting Scott make his own decision vis-á-vis the horrible helicopter plan because her mom did such a shitty job. Ouch.

Khloé and Kourtney are going to aerial yoga. Watching someone try to do aerial yoga might be the only thing more tedious than actually hoisting yourself into a sweaty sling to do a warrior sequence, but here we are. It has something to do with the Mud Run?

Khloé is wearing gigantic gold hoops which sadly don’t manage to get caught in the yoga sling.

“When I work out, I’m hardcore and full-throttle,” she explains.

Another helicopter scene. Scott and Kourtney are bringing a lot of old WASPs to our screen in their pursuit of the good life, huh? In that episode with the painting, there was the motley crew of art appraisers. And now this week we have our first of two helicopter “experts”: Ricarda Bennet, International Woman of Mystery.

Ricarda knows all about helicopters, so she starts telling Scott about things like “transitional slope.” Bruce sidles up out of nowhere, clearly fresh from some sort of hair-teasing, baby-sacrificing eternal youth eyebrow-wax ritual. He fights the urge to retouch his hairdo while listening patiently to Ricarda.

Ricarda tells Scott that he needs to get his homeowners’ association on-board with the helipad plan. Then, he can talk to the FAA.

“You wanna get the homeowners on board,” Bruce reiterates authoritatively, arms crossed, just totally dad-ing out. “Then you go to the FAA.”

Scott starts talking about KY jelly and Ricarda passes out; Bruce offers his own scalp as makeshift smelling salts.

Mason and Penelope are trying on some of the hooker heels that somehow made it through Kanye’s kleansing of Kim’s kloset.

“Do you think this is what I should wear to the Mud Run?” Kim asks. She’s literally in a sports bra.

“Kim just thinks she’s such a hottie with a body,” Khloé says, green with envy. In a confessional, she adds, “I’m gonna shove her face in the mud.”

Scott is consulting with an old British toff in a hangar. They’re talking about the freaking helicopter.

“Forget about Lord of the Rings,” he says cheekily. “This is like lord of the air.”

He expresses a desire for uniformed pilots and a staff to do his bidding.

“In London, they call me Lord Disick,” he tells the horrified Brit.

This is it; it’s the day of the Mud Run.

Khloé starts plowing into her sister’s side like an agitated boar.

Kim, Khloé and about six other runners take off from the starting line in what is apparently the worst-attended 5K in history. Soon, Khloé loses her shoe. Kim tries half-heartedly to push Khloé over.

Khloé is now frothing at the mouth. “I’ve been waiting for her to touch me in an inappropriate way,” she says with a sickening glint in her eye.

The sisters giggle-fight in the mud until Khloé has successfully maneuvered Kim’s ass into the cesspit.

Next, they slide down a giant plastic slide so that they can walk through some more mud. How much do people pay to do these mud runs? Don’t they know you can walk through mud on your own wherever you want, unsupervised? You don’t even have to wear a race bib. Whatever.

Bruce is now wearing a captain’s uniform for LD Airways, Scott’s imaginary fleet, in the kitchen, surrounded by his loved ones. He is a jaunty cross between Michael Jackson and a Village Person. He barks out that he once put his own plane on autopilot so that he and Kris could have intercourse.

Scott has installed red tape to show how big the helipad would be in the yard. In a shocking twist, it turns out the helipad is not such a practical idea. But Kourtney might have been right all along; now Scott knows what a boneheaded plan it was and he can’t even blame her. Well played, Kourt.

Instead of the helipad, Scott buys an enormous plastic tube-slide for the backyard. Not to be a Kris about it, but doesn’t that seem a little unsafe? The whole thing is covered; there could be a hungry coyote or a hobo with anti-Kardashian sentiments hiding in there at any moment, just waiting for little Mason to careen into the abyss. But everyone seems excited, so, sure.

“This is incredible,” Kris deadpans. “This is crazy.”

Kris enters Kendall’s room to find out how her younger daughter feels about her wifely skills. She has apparently just come from murdering someone for their latte; her bloodied Starbucks cup says JEN in Sharpie.

“Do you think I’m controlling when it comes to Daddy?” she asks her teenaged daughter.

“I can see that,” Kendall says diplomatically. “You have a strong personality. You like things to go your way.”

Kris unwittingly confirms this with her response: “I’m very definite, for sure. I have things figured out and I want them to be on my bandwagon. I’m strong. But I can be overwhelming.”

The show’s final scene is some kind of Bizarro World contortion of Something’s Gotta Give. Like the suburban LA version of Diane Keaton and Jack Nicholson, Kris and Bruce are walking along the beach having a convo about middle-aged romance. Kris is decked out in some sort of Morticia-Addams-at-the-seashore caftan, while Bruce sports an unruly ombré pigtail.

“Of course!” Bruce says, his straw hair twisting into an exclamation point while a cartoon flute sounds off in the background.

“I feel horrible that you guys think I’m that bad,” Kris says. “I don’t want to be a crazy bitch.”

“It would be good if you let go and let people make mistakes,” Bruce says. “I think the time will come when you get older.”

Bruce sprouts peroxide-damaged wings and flaps back to his bachelor pad to lie in wait for next week’s episode, when he and his offspring Brody will participate in some sort of new-age cult ritual called “golf tournament.” 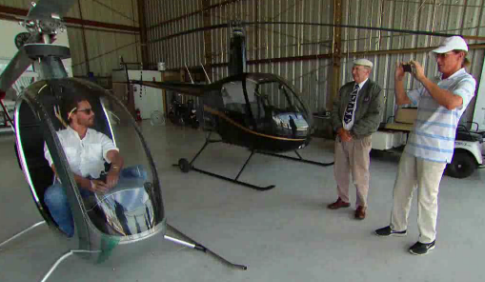