When the episode opens Kourtney and Khloe are sitting at an outdoor restaurant. Kourtney went to the dentist that day and one side of her face has been completely numbed. Combined with her mod alien sunglasses and flat affect, the overall vibe is pretty disturbing. This scene has no other value beyond establishing that Khloe will be moving out of the home she shared with Lamar soon, which is why we immediately go to a different scene on a different day of Kourtney and Khloe hanging out at a different restaurant. Cool editing.

“Isn’t it weird to think you might be a ho again?” The alien inhabiting Kourtney’s body asks Khloe, very sensitively. Khloe vacillates between arguing that she was “always” a ho, and being sad and freaked out about having to re-enter the dating pool. They talk about how they’re going to be going to New York to look for a new space for their NYC DASH outpost, which makes me think very fondly of this.

“What did you order me?” Kim is there too.

Bruce’s storyline is almost 100 percent Jenner this week. He’s brought a remote-controlled car to drive around with Brody and his dog. Does anyone think that Bruce has this fetish for tiny toy-versions of real things (helicopters, cars) because they make him feel like a giant? At any rate, Bruce is there to ask Brody to play with him in a charity golf tournament. The relationship between these two is always pretty tense, and both of them waste no time in making it weird—Brody needles Bruce for claiming that he’s going to do all the heavy lifting in their partnership, Bruce points out that Brody hasn’t practiced in months. The only relief from the tension is that Brody is cuddling his adorable dog throughout the scene. Kourtney and Khloe are in New York. Seeing them bundled in winter coats gives me flashbacks to the Polar Vortex. I can barely look at the screen. Too soon! Khloe remarks that the last time she was in New York, Lamar went missing. She seems like she’s finally ready to talk about what she went through at the end of their relationship, which is in marked contrast to how vague she’s been about it in the past. It was honorable of her to respect Lamar’s privacy in that way, but it must have been frustrating.

The girls are touring new spaces for DASH and their broker shows them a bunch of duds. One store has dripping from the ceiling. Is it possible that the NYC real estate bubble has expanded beyond even the Kardashian’s buying power?

“It’s a cute, quaint space,” Kim says of one possible location, and I think she just thinks that “quaint” is a synonym for “small.” No one is happy. And that’s it for DASH-related storylines this week!

Khloe is packing up her closet back in Los Angeles (…which includes lingerie purchased for her by Rob? Also, how is Rob doing? I’m truly concerned) and going on a bit of a rant about Lamar. He’s going to play basketball abroad and has apparently been giving interviews about how they are moving towards reconciliation.

“Fuck your ring, you were wearing it when you were fucking someone, too” Khloe says, and honestly—good for her. Apparently their busybody mutual friends are sending her texts like the following: “Hey babe, he’s wearing his wedding ring in Spain, are you guys talking?” Khloe should get better friends. She screams at a nonplussed Kourtney about how she had to lie to the press about celebrating her birthday with her husband when he was actually out cheating on her. Ugh, that is dark.

In a change of scene that’s no less dark, Bruce is hanging out with Brandon and pumping him for information about “the Brodster.” Brandon diplomatically says that Brody has always been hard to get ahold of, and tries to put a positive spin on it—Brody isn’t like all those other millenials, with their constant texting and Instagram-ing. He can unplug! He can leave his phone at home! It has nothing to do with him not wanting to talk to his father! Bruce seems to buy this, for now. He’s good, that Brandon Jenner.

Khloe has decided to host a “welcome home Kendall” party at Kris’ house because her sister has been traveling, but I don’t see Kendall anywhere, so I think a more accurate description of the theme might be “Khloe wants to get druuuuuuunk.” We get an glimpse of what Khloe’s party essentials are: inflatable slide, mechanical bull, corn dogs on demand. Seems rad. Khloe is the kind of drunk where all she wants to do is scream at people who are less drunk than she is and/or thinking of leaving. One such person is Scott, who notes her belligerence with concern, and if Scott Disick is worried about your drinking, it’s time to, I don’t know, go to church or put yourself to bed or at least switch to . Khloe goes upstairs to talk to her mother and goes from high energy drunk to angry intense drunk. She is furious that Lamar is still implying that he has contact with the Kardashian Klan. Kris tries to stick up for him, pointing out that he’s probably wishing that things could go back to the way they were, pre-cheating and drug-doing.

“He’s available, if you want to fuck him and date him,” Khloe snaps. Kris stares at her blankly, because what else can you say to that?

Later, Khloe is having yet another party, this time a farewell hang at her house before she moves. She’s at a liquor store with Kourtney, who says she’s turning into a “party animal drunky monkey.” Khloe tells her to stop being so judgmental.

“You’re in your twenties, have some fun. Get plenty of vodka!” says her mother’s disembodied voice on speakerphone. At the party Kourtney tries to tell Khloe again that she thinks the partying is out of control, and Khloe retaliates by trying to lock her and Malika in the garage. How very Misery!

Ugh, the golf tournament saga continues. Brody is late to practice with Bruce, so Bruce takes it to 11 by threatening to call the whole thing off. Later, while go-carting with Brandon and Kendall (I swear to God, the thing that makes me most sick with envy about the Kardashian/Jenner lifestyle is their endless availability to do random activities in the middle of the day) Brody complains about the emotional blackmail, and they both point out that Bruce is easier on them because they make an effort to have spontaneous hangouts, so he doesn’t feel ignored. We also get to see Brandon’s incredible Bruce impression.

At the Jenner manse Kim is showing her sisters random items of baby clothing (??) when Khloe stomps into the room clad in formalwear. She’s drunk and starts snapping at her mom. It is very unclear what time of day it is.

“Can we get out of this fucking white room?” she yells, and I couldn’t agree more.

Golf tournament day! Brody shows up and Bruce starts in on him about hanging out, and Brody basically promises that he’ll be around more provided that Bruce stops implying that all he does is go on surf trips.

Anyway, they play golf in matching outfits and Brody isn’t shy about getting tequila refills on the green. Happy ending!

“Do I save pregnancy tests?” Khloe asks, half sarcastic and half sad as she packs up her bathroom. Oof. Kourtney needs to go easy on her, this is terrible. She’s packing up the last of her stuff when she realizes that someone has taken a bunch of Lamar’s extremely expensive jewelry. It’s only pieces he owns, and whoever did it knew the safe combination, so it’s clearly someone close to her or him. She immediately draws a parallel between the theft and her marriage, berating herself for “failing” to secure the jewelry. The police come and dust for fingerprints and everything! It’s honestly one of the more exciting moments in the episode. Who could have done this?

Next week: Kim makes a “selfie book” for Kanye! 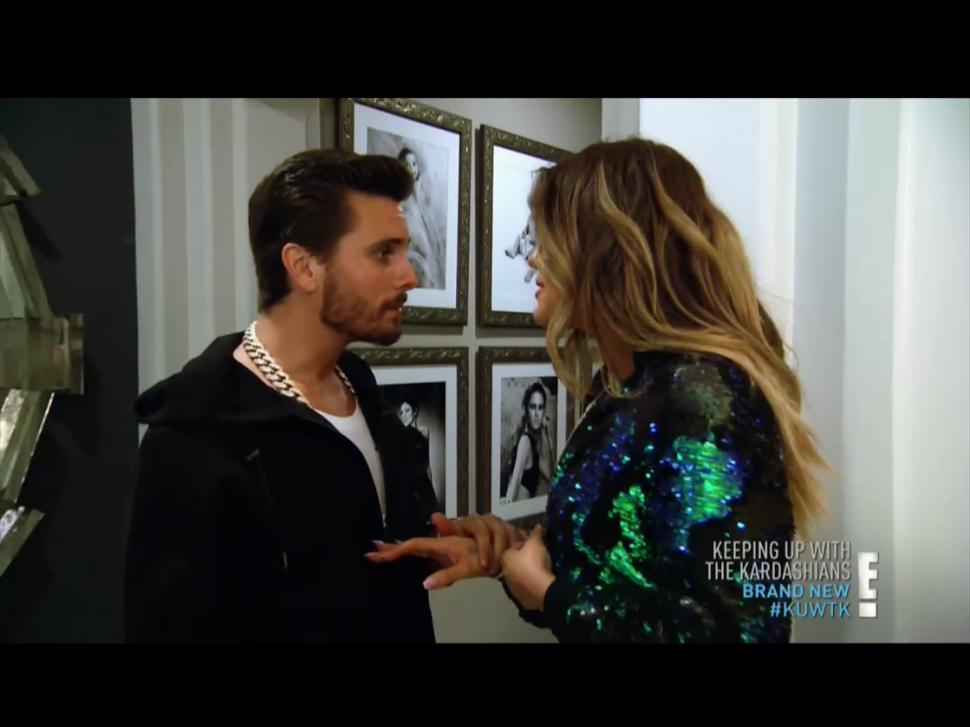