“When I was dating,” Leonard Steinberg says between spoonfuls of oatmeal, “I’d speak to someone on the phone and be like, ‘Listen, you should know, I’m kind of short.’ But then when they’d show up, and see how much better I looked, things were already on the up.”

“Under-promising and over-delivering,” he continues, “is everything.”

Mr. Steinberg draws the eye of nearly everyone who passes through the Mercer Hotel lobby. He’s clothed in aquamarine from head to toe, a vivid contrast against the steady blur of monochrome.

As he leans toward his plate—his third breakfast of the day—his salt and pepper hair catches the sunlight. “Please have some blueberries,” he prods repeatedly. “They are just divine. Have you ever seen blueberries look so divine?”

He’s a difficult person to refuse.

The Mercer Hotel is a comfortable backdrop for Mr. Steinberg, a broker who has established himself as a mainstay in Manhattan’s downtown luxury market. In his 18-year career, he’s spearheaded more than $2 billion in transactions, with a client base spanning from Tribeca to Australia. At Douglas Elliman, he consistently ranked as the firm’s top downtown agent, closing on trophies like Dolce & Gabbana’s 200 11th Avenue penthouse for $32 million.

But Mr. Steinberg, 49, made waves through the industry last month when he announced his defection from Elliman to Urban Compass, a startup brokerage that flaunts a tech-centric approach. Why would anyone leave such an enviable perch, particularly for a company that didn’t even have his name on it?

Urban Compass had its own pitch: after coming onto the scene in May 2013, with Mayor Bloomberg on tap for its launch, the startup promised “an end-to-an-end solution” to the woes of the Manhattan apartment search, along with the complete “rewiring” of “old-school business” through technology.

In September, Urban Compass boasted a $150 million valuation, just four months after its website launched in beta. While the firm has enticed backers including Thrive Capital and Advance Publications, the parent of Conde Nast, the question looms as to whether Urban Compass is merely a sexed up traditional brokerage. (Disclosure: Josh Kushner, a Thrive principal, is also part-owner of Observer Media Group. Observer Media Group has no affiliation with Thrive Capital.)

Mr. Steinberg pops another blueberry into his mouth. “Of course it makes me nervous,” he admits in his South African accent. “I’m scared of change. I mean, I just switched to wearing glasses full time, and I’m hardly able to cope with that right now.”

Later on, as our cab slows toward the Union Square office of Urban Compass, he dismisses the naysayers.

“It’s a dangerous thing to pass judgment too soon,” he says, swinging his silver briefcase out the door. “I think we’re going to surprise a lot of people.”

By design, Urban Compass plays the part of a startup well: a pool table and flat-screen TV occupy the back of the space, next to stacked cases of Snapple. There are no cubicles, instead open desk space with employees clustered inches from one another. Near the back sits the team of 10 engineers, whom Urban Compass touts as the linchpin of the firm. “Just look at that,” Mr. Steinberg whispers as we walk by. “It’s another language they speak.” One scribbles an equation onto the whiteboard behind them.

“The amount of engineers we have is so unusual in real estate,” says Sofia Song, the firm’s head of research and external affairs. “They’re the ones researching and developing our technology. There’s no other brokerage that’s going to have this team.” Ms. Song’s move to Urban Compass also sparked the wires in December, coming off of her six-year tenure as head of StreetEasy’s research and communications.

The team has developed an agent-only mobile app that allows them to update and monitor listings in real time. There’s also a consumer app that lets buyers and renters set up apartment viewings, sign contracts and put down deposits with their mobile device. “We have the only agent-only app in the industry,” Ms. Song says. “Other places like StreetEasy have consumer apps, but we have both.”

Urban Compass CEO Robert Reffkin, a Goldman alum,  said some of their efforts were aimed at targeting buyers more efficiently. “Our system tracks what kind of a profile a person is searching in a neighborhood,” he says. “For instance, if we can see that 80 percent of people in the West Village are coming from the East Village, then we’ll target our West Village listings to East Village residents on Google ads.”

It’s useful market data for a brokerage house. But Kevin Clark, founder of the Realty Advisors Group and adjunct professor at the NYU Schack Institute, suggests that Urban Compass’ disruptive rap has as much to do with showmanship as anything else.

“They’ve got to start showing people why they’re as revolutionary as they say,” Mr. Clark concludes. “But if Leonard thinks there’s something there … we’ll see. It’s going to be interesting to watch.”

Raphael De Niro of Douglas Elliman echoed that Urban Compass’ “tech angle is allowing them to jump some hurdles more quickly than a traditional brokerage might. But whether there’s real substance,” he says, “I don’t think anyone really knows yet.” Mr. De Niro said that the details are “still being worked out” regarding the listings he shared with Mr. Steinberg at Elliman, and added that he was “sad and disappointed” by his former colleague’s move.

EVEN IF URBAN COMPASS  DOESN’T END UP turning the industry on its head, it might not ultimately matter. Mr. Steinberg, who is president of the firm and also receiving equity, has carved out his cachet in relational capital, as evidenced by an intensely loyal client base.

When he left Douglas Elliman for Urban Compass, he and his luxury loft team brought with them close to $200 million in listings, helping thicken a sales page that has appeared sparse at times. Urban Compass now has  19 exclusive listings. The site features  a $37.5 million penthouse at 158 Mercer Street, a co-listing with Mr. De Niro.

“I’ve never gone running after business in my entire career. I’ve never groveled for it, ever,” Mr. Steinberg says. “I’ve demonstrated to the world what I do and the results I deliver, and the world has come to me. My clients like me. I like them.”

Apparently, he’s also a magnet for talent. “A little over 200 people have called and asked to be interviewed since Leonard came,” Mr. Reffkin says. Recent hires include Jay Glazer and Tinnie Chan Sassano, powerhouse brokers from Warburg and Town, respectively. “Leonard brings gravitas and experience and an incredible reputation with him,” Mr. Glazer tells The Observer. “So it made me think, yeah, the grass could be greener.”

On a recent Thursday afternoon, Mr. Steinberg, wearing a pinstripe blazer and slim white pants, gulps down two green juices before a showing at 7 Harrison Street. We’ve been crisscrossing downtown for several hours now, shuttling between Tribeca, Soho and Chelsea for appointments. At 2:30, he’s allowed himself a quick tour of Juice Press for lunch.

“Everything in real estate moves so damn slowly,” he says as we peruse the selection. “And I love speed.” Even choosing a juice is a nervous endeavor. “Protein, protein, protein, where is the protein …” he murmurs repeatedly.

He attributes his anxious, disciplined temperament to his German heritage. Born in 1965 in Cape Town to immigrant parents, Mr. Steinberg says he was drawn to real estate as early as 14. “I would book appointments to go see houses on my own,” he remembers. “Which, when you think about it, was kind of creepy and weird.”

He fell into fashion, designing the first “authentically-themed African couture for South Africa” at age 19. “The models walked down the runway smoking long tribal pipes and wearing turbans … it was exquisite,” he says. “It was such an incredible moment because, for the first time, South African fashion awoke itself to the notion that we didn’t have to copy Europe anymore. It was huge.”

“And I have to tell you, because of that, doors opened for me when I arrived in New York,” he continues. “People were instantly interested in what I had to say.”

He moved to Manhattan at 20. After stints with Victor Costa, Christian Dior and his own company—Julie & Leonard—Mr. Steinberg lapsed into a “mid-life crisis.” “I decided to become a famous musician,” he says. “Big mistake. Although my saying is that I was almost big in Taiwan. They were the only people interested in buying my CD.”

Mr. Steinberg stumbled into a seat at Corcoran, where he would spend the next five years before moving to Douglas Elliman. “I really just had no idea what was going on anymore,” he remembers. He closed his first sale shortly thereafter to a couple, he said, “Nobody wanted to work with.” “I put my blood, sweat and tears into finding them the best,” he boasts. The apartment, a one-bedroom on Bank Street, sold for $265,000. (It recently traded for $1.4 million.)

In the last 18 years, in an industry Mr. Steinberg condemns as “too absorbed in the transaction,” his creative mind has served him well. He started a monthly newsletter called Luxury Letter, which he’s distributed every month for the last 10 years, along with Luxury Reel, the first online real estate television channel.

“Above all, Leonard is a creative person,” says Hervé Senequier, Urban Compass’ VP of strategic development and Mr. Steinberg’s business partner of 13 years. “It’s given him an edge his whole career.”

BACK AT THE URBAN COMPASS OFFICE IN Union Square, Mr. Steinberg prepares for the day’s final meetings as the clock nears half past 7. He walks briskly up and down the hallway and into his office, juggling a stack of files while scrolling through his inbox. Nearby, two employees split takeout as they drum on their keyboards. An engineer, brow furrowed, studies the decorated whiteboard. The crack of a cue ball can be heard in the background.

Even this late, the office hums with energy. Despite Mr. Steinberg’s evident enthusiasm as he surveys the firm, he maintains a sober outlook on its potential.

“I’m not going to be the one to say that this is going to be a multi-billion dollar company,” he admits, combing through a final batch of emails. “Like I said, under-promise and over-deliver—I’ve always done that, and that’s what I plan to do here.” 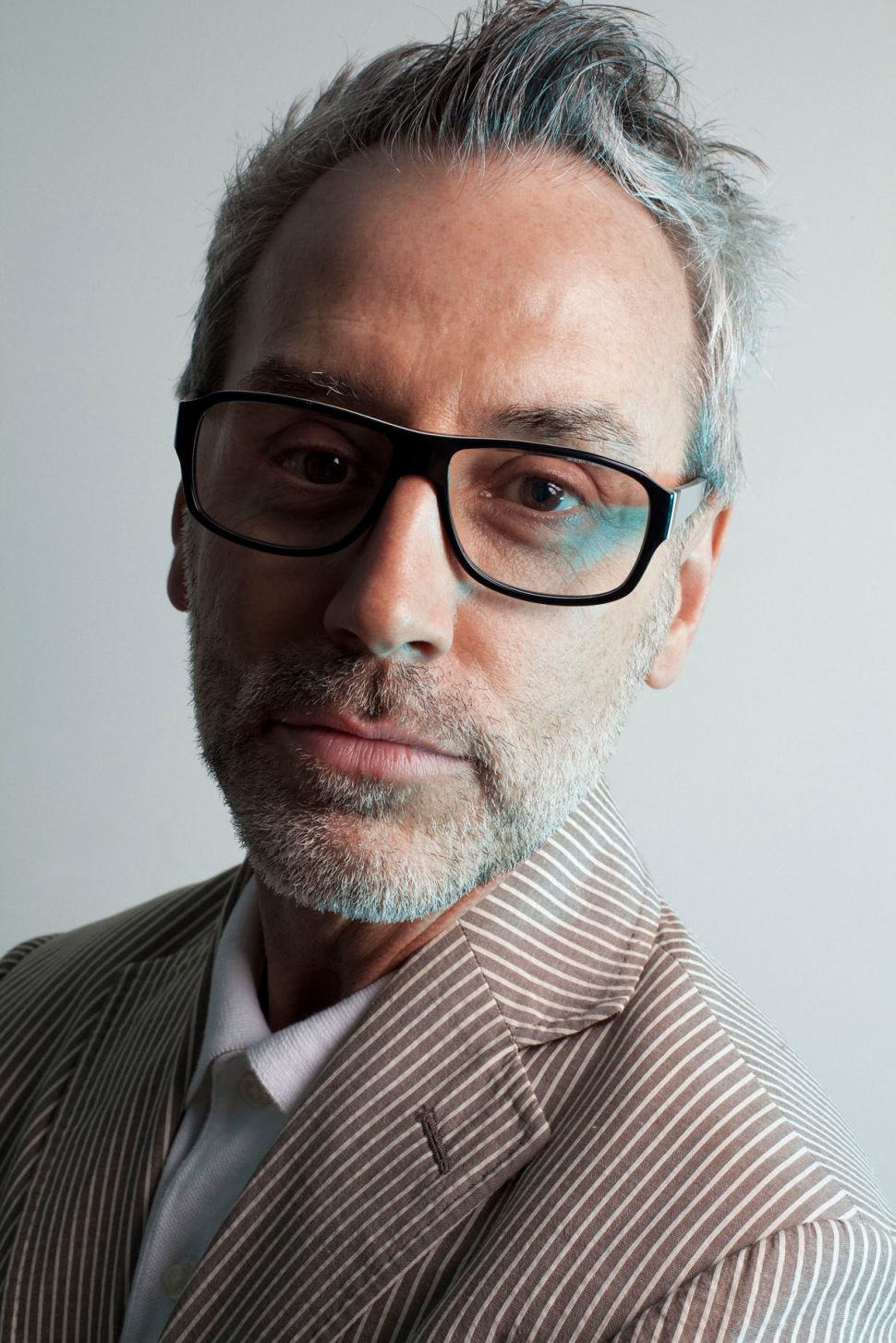