In what is perhaps the greatest utilization of social media ever, Jeremy Levenbach (a.k.a. @Levenbutt) has been Instagramming his early morning, bare-bottomed misadventures all over the city since mid-2012.

“The first one was taken on my old roof in the East Village,” Mr. Levenbach said. “I texted it to a bunch of friends. They liked it. I did a few more and then started posting them to Instagram.”

Since then, Mr. Levenbach, who takes his friends along to capture the butt shots, has amassed over 2,000 followers on Instagram.

He usually takes the photos in the early morning to avoid police detection (and unsuspecting children), although he has had a few near misses.

“The shot on the A Train, a pretty upset looking conductor caught me putting my clothes back on. I think he thought he caught my photographer and me having sex,” he recounted of the run-in (the A train has seen worse).

Other than that, Mr. Levenbach is pretty mindful when it comes to striking a naked pose. “When people are nearby I tell them what I’m about to do,” he said to the Observer. “Nobody ever seems to care really. When somebody walks by as the photos are being taken they usually laugh, shout stuff and take photos. It’s pretty hard to shock people.”

His Instagram mantra is “I look silly naked,” and he isn’t the slightest bit perturbed over being barefoot (or catcalled, apparently) all over Manhattan. And if it ever gets to a Levenbutt vs. Naked Cowboy showdown, these shots prove that Levenbutt wins. Every time. 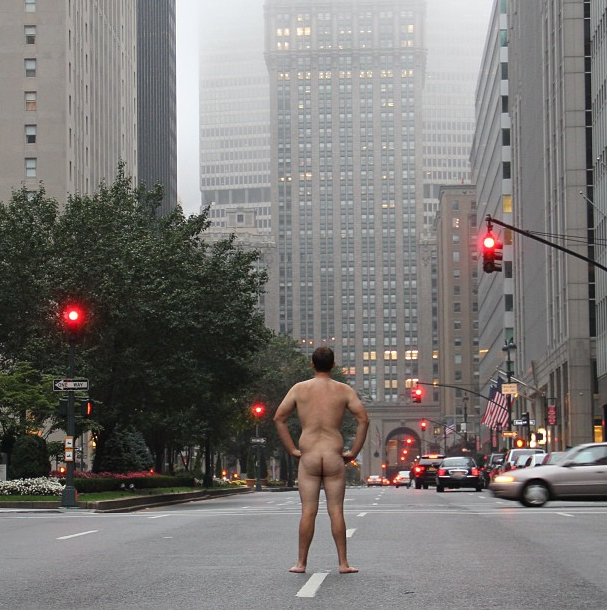