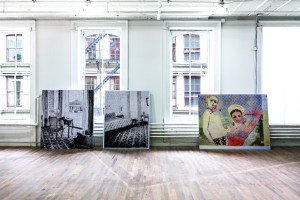 “Capitalist Realism” is a term used some 50 years ago by German artists Manfred Kuttner (1937–2007), Konrad Lueg (1939–96), Sigmar Polke (1941–2010) and Gerhard Richter (born in 1932) to describe their work. It was a reaction to Pop from a postwar Germany divided between East and West. From happening-like shows organized in abandoned former butcher shops and shopping malls to current manifestations in the form of solo shows at MoMA and Chelsea galleries, the group’s discoveries and legacy loom large for today’s contemporary art world. Yet their collaboration also has come to have mythic status. Kuttner only made art for three years before giving it up to go into advertising. Lueg changed his name to Konrad Fischer and ran a gallery showing Minimalist and Conceptual art. It would be hard to be unaware of the success of Polke and Mr. Richter.

Organized by Kunsthalle Düsseldorf curators Elodie Evers, Magdalena Holzhey and Gregor Jansen, Artists Space’s director, Stefan Kalmár, and its curator, Richard Birkett, Dusseldorf-based curator Susanne Rennert, and artist Christopher Williams, this elegant show tries out some radical solutions to the challenge of telling the story of this radical group of artists. One chief problem is that their work happens to be among the most expensive of their generation. (Mr. Richter is currently the priciest living painter at auction.) Rather than try to obtain loans (and finance formidable insurance bills), “Living with Pop: A Reproduction of Capitalist Realism” gingerly sidesteps their actual art, opting instead to present a rich trove of archival materials. It’s one of the more fascinating instances of recent outré curatorial thinking, and manages to conjure the group’s heady moment through the sheer force of the ephemera and documentation on display.

The show clusters that material around a series of exhibitions and “actions” that the young artists staged between 1963 and 1966. We see through show invitations, letters, photographs and other ephemera the earliest intentions and manifestations of the group. There’s the guestbook for the 1963 show that took place in a butcher shop on Kaiserstrasse in Düsseldorf. There is the gallery-watching registry that shows Polke signing up for more than his fair share of shifts, and checklists with the price of Richter paintings: 1,600 Deutschmarks (approximately $1,200 at the time). There are photos of the stylish Lueg in sunglasses and of a youthful Benjamin Buchloh, the hard-charging art historian, making the scene, and of the “Front Yard Exhibition” hosted by Galerie Parnass, at which the gang put their paintings on view by sticking them into snow.

The nonprofit’s Walker Street space shows the influence of Fluxus on the group of Kunstakademie Düsseldorf artists. George Maciunas was working in Wiesbaden, just outside Frankfurt, as a graphic designer for the Air Force during the early 1960s. There’s documentation of collaborations between Joseph Beuys, Nam June Paik and Maciunas that show that Mr. Richter, Polke, Lueg and Kuttner were spectators encountering such early Fluxus performances. There’s correspondence between the German artists and Alison Knowles and David Tudor.

The curatorial team’s display choices give the show a charmingly weird character. Along with the bevy of archival materials, there are also life-sized photographic reproductions of artworks placed on eccentrically angled walls. While most shows stage an encounter with artwork, this one puts everything but the work itself on display. Eschewing art objects is a brilliant curatorial solution to the practical matters of staging a show on these artists, though it ultimately feels a bit unmoored as a visual experience. I spent hours in the show, yet I came away with no concrete relation to the subject—you feel like you have been let loose in an archive, able to construct your own experience and take away what bits you choose.

Still, Artists Space makes the strong case that a small group of the most influential artists and their politically and socially charged work still has much to teach contemporary audiences. The show is a genealogy of the kinds of strategies you see every day in the New York art world—most of all, folding advertising strategies into the display of art. The story is part buddy movie, part radical curatorial gesture, but most of all it’s a story about the transformed status of art objects in the 20th century. The curatorial approach, eschewing the aura of art for ephemera, is eminently suited to this material—yet it is also worrisome. Are physical encounters with artwork at odds with experimental approaches? Hopefully, an important place for artwork remains in alternative spaces.