In the course of a normal workday, Sharela Bonfield may order supplies, supervise interns, clean, answer the telephone, arrange meetings, create PowerPoint displays, handle paperwork, administer archives and do “whatever else needs to be done.” It is difficult to say exactly what Ms. Bonfield’s job actually is, because she has so many responsibilities, but her title is clear enough: artist’s assistant. A graduate of Baltimore’s Maryland Institute College of Art, Ms. Bonfield, a New York-based fiber artist, works three days a week for sculptor Lesley Dill and two days a week for artist Whitfield Lovell.

If her job sounds a bit all over the board, her official job description doesn’t offer much help. Ms. Dill’s want ad asked for someone “talented, cheerful, peaceful, and hard-working.” The only specific requirement: “strong wrists,” because the assistant will be “cutting flat metal and wire.” The “peaceful” part is essential. “We work in total silence,” Ms. Dill said. She asks her assistants to “leave their troubles at the door and view the studio as the focus of all their attention and energies.”

Salaries in many studios are not high. Ms. Dill pays a “little over $10 an hour” (“I don’t give raises, so people just move on”), but such jobs regularly attract many eager art school graduates, since they can teach lessons and offer connections that cannot be easily gained in academia.

The artist assistant job is regularly seen as an important experience for a young artist. Is it a worthwhile one? What kind of employers are artists? There is, of course, no one answer, but it is generally not a cushy experience. Beyond the low salaries, there is usually no sick or vacation pay, and no health insurance is the norm. And many of the jobs that assistants perform have relatively little to do with their academic training.

Probably the chief attraction the job offers is the potential entrée to the professional art world that it represents to younger artists. Amy Cousins, who also assisted both Ms. Dill and Mr. Lovell, said that when working for them, “I tried to ask a lot of questions about how they got to where they are, what were pivotal moments in their careers, things like that. They were both very forthcoming and open about their experiences and gave some good advice.” But even with mentoring artists, there are downsides. “It can definitely be a challenge to have artistic energy in your own studio after spending all day working for an artist,” Ms. Cousins said. “Working for Lesley would physically tire my hands, and it was hard to want to use them when I got home.”

Menial jobs can become a source of friction. “If you won’t take out the garbage, you’re not much help to me,” Vito Acconci said. Mimi Gross said that she has a much easier time with female assistants because they are more willing to do housekeeping and office tasks than males. “When I had a small child, I’d ask a female assistant to babysit while she was in the studio,” she said. “I wouldn’t ever think of asking a male assistant to watch my child. If you ask them to do something they don’t want to do, they won’t focus on it and do it badly.”

Over time, assistants can become essential to the artists for whom they work. Mr. Lovell’s favorite assistant worked for him for five years, coming “in every day with a positive attitude,” he recalled. “He’d say, ‘What are we going to do today?’ That brought a lot of energy into the studio and I thrived on that.”

Stephen Knapp, a sculptor in Princeton, Mass., sends out Don Collette, one of his two longtime assistants, along with his work when it is displayed in a museum. “He can spot problems in the work and in how it is installed that few other people can see,” said Mr. Knapp, who typically shows up a day or two later.

Mr. Knapp hires assistants with art training because he wants people who have an eye for detail and some experience with the creative process, usually people with BFA or MFA degrees, “especially those who have worked as museum preparators, are my favorite assistants to hire,” he said. His pay scale is $16 to $22 per hour.

“Tom,” meaning sculptor Tom Sachs, “wants the highest skills for the lowest wage,” said Liz Ensz, a fiber artist who worked for Mr. Sachs for a year (starting at $15 per hour, ending at $17), creating components for a lunar module installation based on photographs the artist found, alongside anywhere from five to 12 other assistants. She got the job through another of Mr. Sachs’ assistants, J.J. Peet, the boyfriend of one of her former teachers at the Minneapolis College of Art and Design. Her interview with Mr. Sachs consisted of the artist looking at online images of her work.

At the end of her year as a studio assistant, in 2007, the artwork was exhibited at Gagosian in New York. His assistants came to the opening, but the applause, naturally, was for Mr. Sachs. “I don’t feel weird about that at all,” she said. “I’m actually grateful for the experience. I learned more in Tom’s studio than I did in art school.”

Not every studio assistant finds the anonymity of the job as easy to swallow. “I do think about not getting credit,” said Claire Taylor, who worked for Tara Donovan, who makes labor-intensive abstract sculptures out of accumulations of thousands of items, like toothpicks or plastic cups, for nine months. “It’s her work, her ideas, but her work ends up becoming your whole life; it just consumes you, and it is very hard after eight hours of constant work in her studio to come home and push yourself to do your own work.”

Sometimes assistant jobs do lead to major career development. After Gina Campanella graduated from Skidmore College in 1989 she set out to work as an assistant, and had some luck in her first job, with Michael David. She specifically wanted to work with a woman. “I thought a woman artist would be more of a mentor to me,” she said.

Some of her hopes were realized. A print publisher who visited Mr. David’s studio struck up a conversation with her, took her out to lunch and introduced her to Joyce Kozloff. Ms. Kozloff, whom she worked for next, introduced her to Barbara Zucker, who hired her and recommended her to fill a short-term teaching spot at the University of Vermont, where Ms. Zucker herself worked. Both Ms. Kozloff and Ms. Zucker also chipped in $250 apiece to pay for Ms. Campanella to attend the Vermont Studio Center as an artist-in-residence. Ms. Campanella became part of a network of artists (“Joyce has never missed a show I’ve had,” she said) and, through working for some artists who are more established, learned something about what it is to be an artist.

However, mentoring doesn’t always take place. Jonathan Williams’ experience as an assistant to Frank Stella did not include much conversation other than shoptalk. “Everything that mattered with Stella was the work at hand, and we really didn’t talk about anything else,” Mr. Williams said. “I don’t remember him ever asking me much about myself.”

Promotions, raises and industry recognition—typical rewards of employment—almost never occur in studio work and so it is something of a job for the young. Those who tire of it often have passed a certain point in their sense of who they are as artists. For many studio assistants, working for an artist is a type of postgraduate training that eventually comes to an end, after they have picked up that on-the-job experience.

Sometimes it leads to a career change. Carmella Saraceno stretched canvases for Basquiat, glued plates onto canvases for Julian Schnabel, but she discovered her real calling after she began working with sculptor Alice Aycock, after she did a temp job helping to unload a truck for her. She came to Ms. Aycock’s Manhattan studio at 8:30 in the morning and spent the day hauling up one piece of lumber after another to the artist’s studio, the one woman among several men. The lumber didn’t fit easily into the freight elevator at the studio, but Ms. Saraceno took charge of directing the process of maneuvering the pieces. Ms. Aycock was impressed and offered her work.

That work was varied, to say the least. “I got the keys if she was locked out, I got the car before it was towed,” and she offered comfort when the artist had a blowout with her then-husband. Ms. Saraceno also figured out how to assemble and install public sculptures for which Ms. Aycock provided designs. “Alice never said no to any project … Someone would ask her to do a project that involved electrical power, and she’d say, ‘O.K., I can do electrical,’ but she knew nothing about electrical.”

In 1990, Ms. Saraceno started her own business with sculptor Roger Machin, in Chicago, called Methods and Materials, which helps artists, art galleries, corporations, museums and public arts agencies rig, install, de-install and relocate large-scale artworks. “What I do now is figure out how to do things,” she said. “I wouldn’t be doing this if not for having worked for Alice Aycock.” Her business currently employs nine artists, who are afforded health insurance and 401k pension plans. 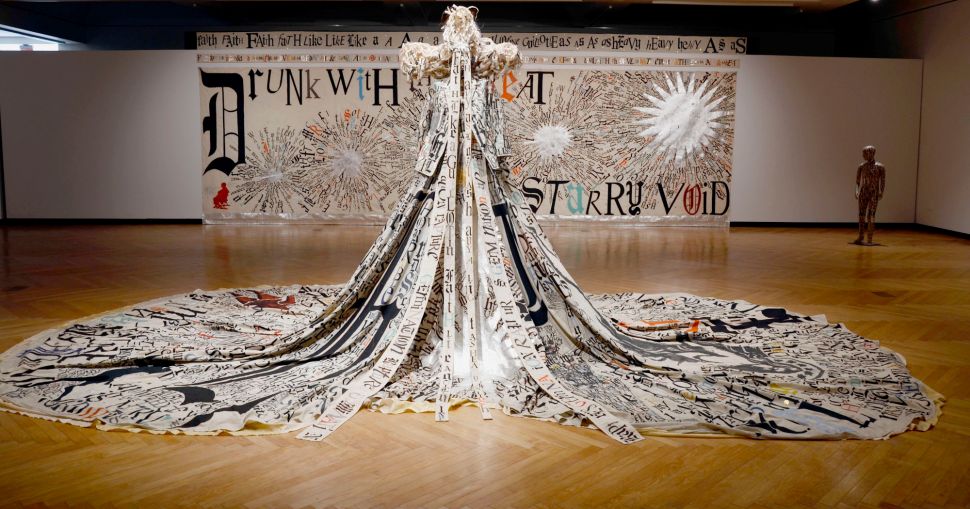