The embattled politician, indicted earlier this year on charges related to how he ran a health food restaurant before he ran for Congress, is facing a tough reelection bid against Brooklynite Domenic M. Recchia Jr. for the cross-borough seat.

But the flow of cash to Mr. Grimm has slowed since the indictment, with no money coming to him last month from national Republicans, according to the filings for June 5 through June 30.

While the fundraising money has slowed, so has the campaign’s spending—his operating expenses were just above $13,000 between June 5 and June 30—leaving Mr. Grimm with a little more than $1 million on hand as the campaign heads into the summer. But thanks largely to his legal bills, the campaign also owes some $438,565 in debts.

“My campaign has been fundraising aggressively for the past year and we are absolutely on track and where we need to be. My support is based on my achievements in Congress … from major flood insurance reform that drove down massive premiums to $60 billion in Superstorm Sandy aid,” Mr. Grimm told The Observer in a statement. “However, my opponent’s funding comes from months of desperate seat shopping among the City’s ultra-liberal elite.”

He slammed Mr. Recchia, who raised $261,693 for considering bids for comptroller and Brooklyn borough president before settling on Staten Island as a “last resort.”

“He’s in for a rude awakening when his entire record is against their interests: from voting to raise property taxes 18.5 percent, to supporting more tolls to enter Manhattan, to ignoring the people’s will and voting himself a third term in the City Council,” Grimm said.

The campaign’s Schedule A form lists just 18 individual donors—some of them residing at the same address—though some made more than one transaction. Three of the donors are associated with the Savo Brothers construction firm, with each giving $1,300 in July. The firm has drawn the ire of many on Staten Island after it purchased a former Jesuit retreat space, Mount Manresa, where it plans to tear down old-growth trees and building hundreds of townhouses. The Savos have also donated to other local officials in the past.

But spokesman Nick Iacono said Mr. Grimm strongly supported the city or state acquiring Mt. Manresa to preserve for the public and had made that clear.

Mr. Grimm’s expenditures for the month were limited to payroll costs for just a handful of campaign staffers, administrative expenses like cell phone bills and one $250 expense for an ad with a local Rolling Thunder motorcycle group.

With little cash to spend on mailings or television ads, the skilled retail politician has been hitting local events like parades and festivals in his district, where the he’s often overwhelmed by people who want to take pictures with him or shake his hand.

The Recchia campaign did not immediately respond to a request for comment about its fundraising or Mr. Grimm’s remarks.

This story was updated to include comment from Mr. Grimm and new information on Mr. Recchia’s campaign filings. 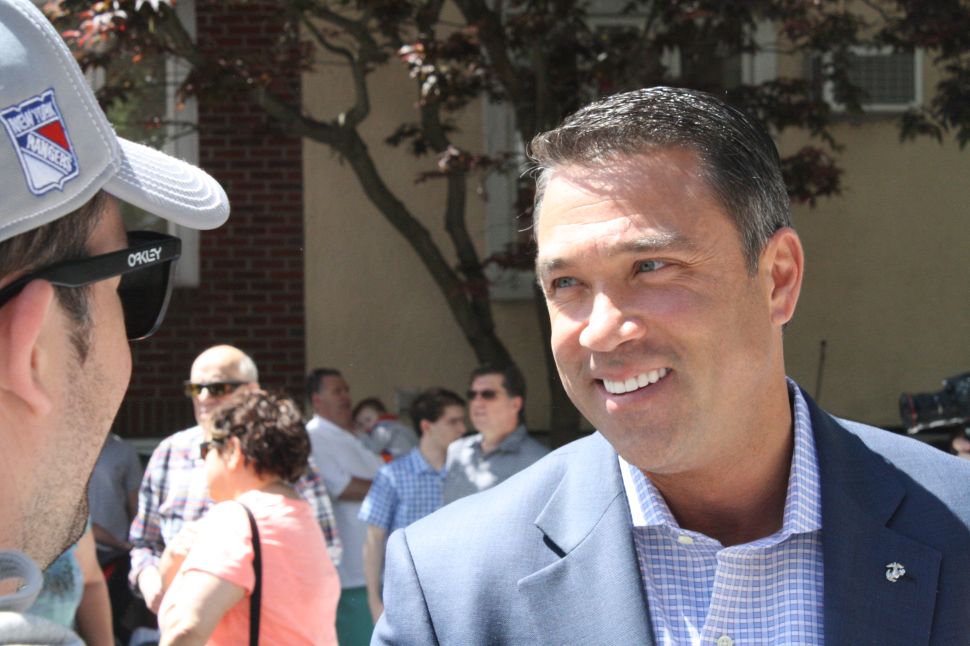