Last month, a young New Yorker named Montana Masback opened a restaurant in Bushwick called Montana’s Trail House. In articles about the restaurant’s opening, Mr. Masback referred to the cuisine as “Appalachian East coast country food.” The chef, Nate Courtland, meanwhile, described it as “Appalachian black magic comfort food.” To transform what was once an auto repair shop into a mountain hut, Mr. Masback purchased a dilapidated barn from Kentucky, deconstructed it and reassembled the pieces in Brooklyn. Among other archly rural accouterments are a taxidermied deer head, a Betsy Ross flag, framed old timey photographs, an axe and, in the bathrooms, decoupage of mid-century nudie magazines. The waitstaff had that new antiquated look adopted by so-many seventh-stoppers—the restaurant is off the Jefferson Street stop on the L train—which combines a youthful complexion with old mountain beards for the gentlemen and Walker Evans frocks with tattooed arms and septum piercings for the waitresses.

Montana’s Trail House is a very bad place. Its rottenness is both inherent and cosmetic; it is culinarily insipid and morally insidious. It’s bad to the last splinter of its Kentucky wood. Parceling off generic objections to the ridiculous fantasia Bushwick has become, there is a deeply toxic relationship with history and with America embodied at Montana’s Trail House. One need not be from Appalachia to object to the fetishization of that impoverished region for the blithe consumption of faux Brooklyn frontiersmen and women. The miserable condition of Appalachia, a region that runs from New York to Mississippi, is as raw a wound and as deep a shame as a decapitated strip-mined peak. Poor, poor and damned poor are the mountain people who still live there, though as Ronald Eller notes in his bleak study Uneven Ground: Appalachia Since 1945, there’s not that many of them. “In one of the nation’s largest internal migrations,” he writes, “over 3 million people left Appalachia between 1940 and 1970.” Today, of the 420 counties that make up the region, 107 are classified as high-poverty.

Ever since Will Wallace Harney invented the myth of Appalachia in 1873 with his article, “A Strange Land and a Peculiar People,” in Lippincott’s Magazine, the region has been othered, the better to mythologize it, perhaps, but certainly not to help it. As Mr. Eller writes, “The notion of Appalachia as a separate place … has allowed us to distance ourselves from the uncomfortable dilemmas that the story of Appalachia raises about our own lives.” Appalachia is not a rural Shambhala or evocative coffee table book source material. It’s not just a place to buy old barns. The misery is human and ongoing.

I’m not cynical enough to believe Mr. Masback knows the sorrowful history or despairing present of the mountains. I doubt if he is aware or even curious to inquire how that barn he bought became fallow. If he knew and still exploited the story that would be some black magic indeed.

Perversely, the one thing that could redeem Montana’s Trail House is Appalachian cuisine. I’m not talking about squirrel or opossum, or the foodie version of the SNAP diet. Rather, a hopeful fellow might look forward to burgoo, a meaty Kentucky stew; chicken and dumplings, with either the traditional fluffy dumplings or sophisticated flat ones; shuck beans; spiced apple stack cake; pawpaw or even cornbread. Fucking cornbread, man.

Alas, there’s just the sort of generic Southern food you find at nearly every restaurant with “The” or “&” in the name: a totally underwhelming fried chicken, leg and thigh both as greasy as a teenage boy’s T-zone, offered for $18. A plate of oily “seasonal” vegetables called a “Summer Harvest Plate” ($17) consists of zucchini, squash and greens. Calling that a vegetable plate is like calling a bunch of honeydew a fruit salad. A rabbit terrine, the closest thing to game, went nearly untouched. The gelatinous terrine was so poorly executed that it fell apart like a dysfunctional family of Thumpers, leaving chewy chunks of rabbit to wilt next to pickled white currants.

Even when the offerings are tasty—I wouldn’t spit out the root beer braised brisket with Anson Mill grits ($23) or the master fat fried potatoes ($6)—they are morally hazardous. You can’t be an innocent patron at this blank parody. If you’re enjoying yourself, a not entirely difficult task considering the strength of the cocktails and the pure theatricality of the mountain man Bushwick crowd, you are participating in a crummy project. Simply put, mere presence at Montana’s Trail House means you’re on the wrong path. 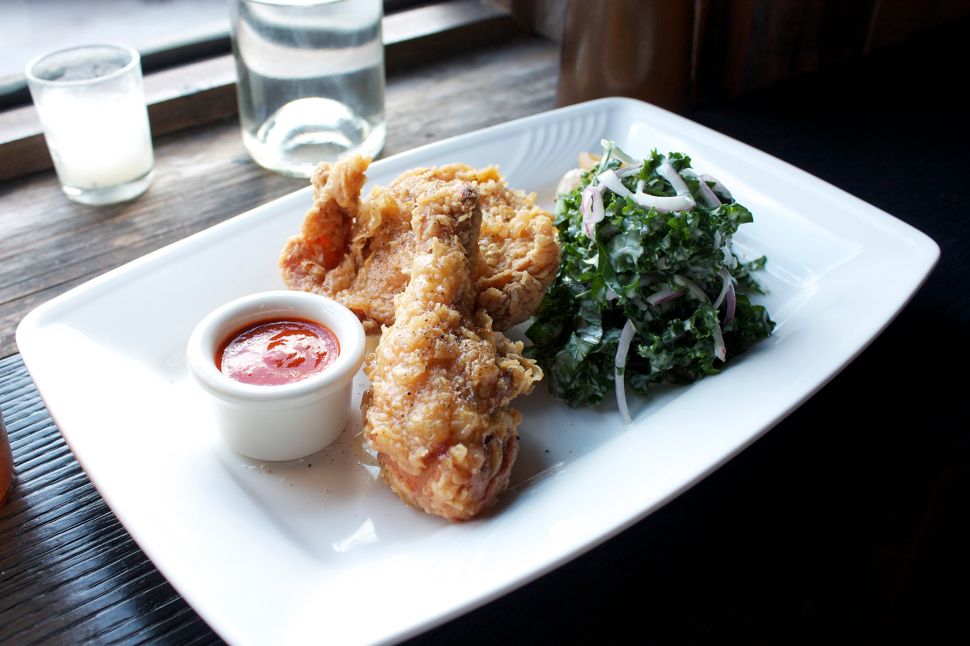