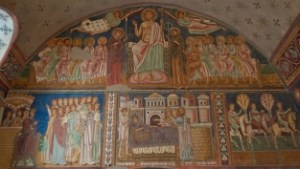 In a Brooklyn art gallery, artist Marni Kotak is undergoing a daring performance — she’s going off her typical doses of anti-depressants and anti-psychotic medication. [The Daily Beast]

“After years of outsize promises and delays, officials are scaling back plans for the Museum for African Art in New York.” [NYT]

The Canadian Department of Heritage refuses to return a pilfered Indian sculpture because it was never reported as stolen. [The Economic Times]

Feast your eyes: Rome’s “most profane” frescos are now open to the public. [The Art Newspaper

Young artist Dean Levin has been snapped up by Marianne Boesky. Mr. Levin is currently showing at Sean Kelly Gallery and Rob Barton, and will show at Joel Mesler and Zach Feuer’s Hudson venture, Retrospective, on August 2. [artnet]

Paris, begin your Koons Kountdown: The Musée du Louvre has confirmed that it will display a number of giant Jeff Koons balloons to coincide with “Jeff Koons: A Retrospective” moving to the Centre Pompidou in late November. [The Art Newspaper]

In the midst of the crisis in Crimea, the art world took in a performance of Swan Lake by the Bolshoi Ballet, at Lincoln Center. [Artforum]

Artists distill schnapps from a Joseph Beuys sculpture, and drink it up. Apparently it tastes like Parmesan. [artnet]