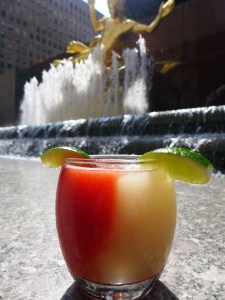 The Detroit Institute of Arts will continue its Inside/Out project, bringing reproductions of works from the museum to Detroit’s surrounding suburbs. [The Mining Journal]

Margy Kinmonth’s documentary on the turbulent history of Russia’s State Hermitage Museum will be released September 9th. [The Art Newspaper]

Here are more crucial details regarding the mind-blowing, game-changing gallery that Damien Hirst is opening in London to display his plunders: it will open in May or June of 2015, will be designed by Caruso St. John Architects (who revamped the Tate Modern) and will take over the whole length of Lambeth Street. [The Guardian]

In honor of “Jeff Koons: A Retrospective,” go get a Jeff Koons cocktail, designed by Jeff Koons, at the Rockefeller Center Summer Garden and Bar, right under the Jeff Koons installation, Split-Rocker. [New York Post]

On the spooky abandoned North Brother Island, a blip of land in the East River, an installation—a deconstructed living room—has appeared out of nowhere. [Gothamist]

The North Carolina Museum of Art, which is just a lovely institution in a great state, has received a $1.9 million grant. [WRAL]

In the second quarter of 2014, art sales reached over $6.4 billion, up seven percent from the same quarter in 2013 according to artnet. [artnet]

Jonathan Jones on why Scottish art is against independence. [The Guardian]

“In art the safest bet is the biggest bet.” [Bloomberg]