Like most things in life, viral marketing goes through its fads and its trends every couple of months, depending on what advertisers think is cool. As for the latest trend, there is some good news and some bad news.

The good news: the most popular trend in viral marketing is no longer “scaring the shit out of people.” You can walk safely down the street without worrying about being attacked by zombies, or a grizzly bear, or lifestyle terrorists, or even a possessed demon baby.

The bad news: What you do have to worry about as you stroll down the street is a grown man’s sweaty balls flying in your face. Because the latest trend in viral marketing is naked people. People getting naked, being naked, dancing naked, singing naked, good naked, bad naked, old naked.

Either way, apparently the TV bigwigs are under the impression that all America wants to see is junk both hanging low and wobbling to and fro. From a USA Today story titled “Naked TV shows get lots of eyeballs”:

Definitely, Naked and Afraid was groundbreaking and gave us more permission to try something like this on air,” says Howard Lee, TLC’s executive vice president of program and development.

And VH1’s Susan Levison says Dating Naked was the first project she bought when she became programming chief last fall, and has since heard several more pitches for naked TV shows.

Put “naked” in the title, bare bodies on the screen and watch what happens. Those behind the cameras hope for big ratings. Those in front of the cameras seem to figure out the sum is worth more than the private parts.

Just four days ago I wrote about Undress Me, the new “short” made to promote Showtime’s Masters of Sex, wherein the director “asked strangers to undress each other and get in bed. Nothing else. No rules.” That was a wink wink nudge nudge way of saying that she asked a bunch of attractive couples and one kind of old couple to get naked and maybe hopefully touch each other and stuff. Quick side-note: that post is like one of the most read things I’ve ever wrote at tvDownload, so you people are buying into it. Don’t drink the naked Kool-Aid! Which, by the way, sounds like a show that would be on VH1.

Did someone say VH1? The network recently jumped aboard the naked marketing train with a new spot for Dating Naked, in which a crowded LA street is overtaken by a bunch of nude dancers.

To be fair, Dating Naked is just a show about naked people. But it takes place on an island, not a crowded LA street. Think of the children, VH1. Call me crazy, but I don’t think seeing people flopping as they flip around makes me want to watch any TV show. Or anything else ever for that matter. Give me blindness before you give me this, advertisers. 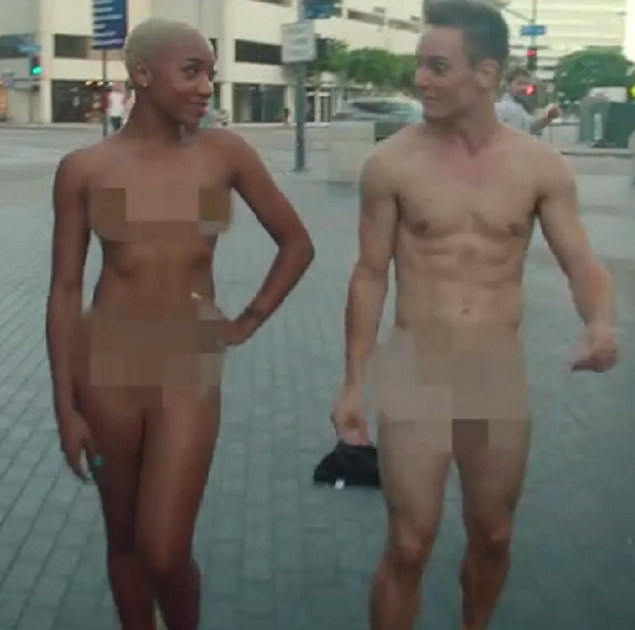