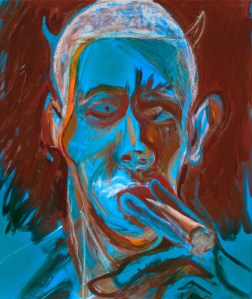 The occult anxiety begins with Jesse Greenberg’s Brick Birth I, a polyurethane magic-show effigy of a shamanistic cave vulva sitting on a low, icy green pedestal next to a stingray placenta. Several clean, white escape ropes drape across its orifice only to get stuck in its walls. A sculpturally cool, late 19th century ink and crayon drawing by Félicien Rops, Gaieté Hermaphrodite, points the way to Julia Wachtel’s billboard-style, oil on canvas juxtaposition of a pair of sexily inhuman anime schoolgirls with a slightly fantastical fast-food menu, Doubles, and Max Klinger’s overheated allegorical etching Ruler of Death (Second Part, Opus XIII), also a century old, directs the viewer to Lionel Maunz’s cast iron, steel and concrete Social Pattern Defect, a ruefully funereal evocation of the ruins of a Socratic dinner party. Splitting the difference between technological threats to the body and social threats to the mind are Huma Bhabha’s untitled headhunter trophy, a square piece of packing Styrofoam the size of a box fan, blackened and bloodied with acrylic and oil stick, marked with what are either deep, empty eyes or two bullet holes to the collar bone, and sitting atop a chunk of wooden beam on a glossy white pedestal; and Nancy Grossman’s 1968 lithographic crayon drawing of an exile from Tatooine in torment, Untitled (Head for N.G.). But it’s painter Peter Linde Busk who provides the oozy synthesis, the distantly recognizable, cheerfully eerie new demigods at home in whatever comes next, with the small acrylic Niagara Falls, Slowly I turned … and the larger Tannhauser (Green Sky), which shows a hunched little figure with the oversized clothing of a child and eyes ripped open to the jaw taking shape in a poisonous green rain. He is either bestriding or emerging from a mucus-pink river of blood. The show was curated by the gallery’s associate director Isaac Lyles.