Every few weeks, it seems, another trend emerges designed to get the coveted millennial demographic to read news content. This week? It’s all about news apps aimed at young people. Young people like apps, right?

“Millennials don’t have the print habit,” media analyst Ken Doctor told the Financial Times. “You want to develop new subscribers in millennials for whom digital and now mobile is preferred for reading the news.”

And that’s exactly what media companies are trying to do.

News Corp, undaunted by the failure of The Daily, the tablet-only newspaper that closed in 2012 after just two years, is developing “an app-based news service aimed at ‘millennial’ readers that would “blend original reporting with repurposed content from News Corp properties,” The Financial Times reported on Wednesday. News Corp declined to comment on the new app beyond issuing a general statement about potential platforms and digital growth. According to the FT, News Corp will decide on this specific potential platform in the coming weeks.

BuzzFeed is in the “embryonic” stages of developing an app for serious news (it already has one for general BuzzFeed content, listicles and all), according to AdAge. For BuzzFeed, a site that already does a very good job of targeting millennials, the goal is to make its real news stories more easily accessible. But if you want young people to find stories, then you have to go mobile.

Both stories cited the success of The New York Times’ NYT Now, an app which launched in March and features a frequently updated selection of relevant news stories that are “handpicked and summarized” by Times editors. Even though, according to an earnings call with investors earlier this week, NYT Now is actually as successful as the Times had hoped, it was touted for “reaching a much younger audience than we’ve ever reached before with any of our digital products,” as VP of digital product Denise Warren said during the call. (The Times also recently launched an opinion page app and has a forthcoming cooking app, but those, like its Scoop app, which launched in 2010 and has not been wildly successful, are not as clearly aimed at a younger demographic).

So maybe the future of news is news apps aimed at millennials. Or at least, it is this week.

After all, if Kim Kardashian, a famous rich person who recently spent many millions of dollars on her wedding, can convince people to give her real money to pretend to live like her in the virtual reality of a smartphone game, why can’t media companies get some cash for actual content people can read on their mobile devices? 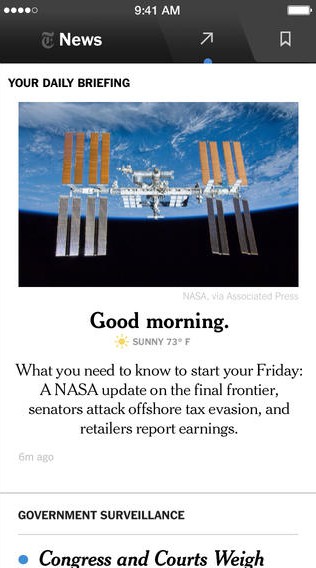