Behold, an In inexhaustible source of kimchi recipes for North Korean housewives. (http://www.cooks.org.kp/)

If this isn’t a sign that the Real Housewives of Pyongyang is on its way, we don’t know what is.

The DPRK’s Korean Association of Cooks has launched a most supreme cooking website filled with recipes for “housewives’ convenience,” the Guardian reports. The site, creatively named “Korean Dishes”  also offers helpful information on North Korean restaurants, and on the cooking organization itself.

The launch of Korean Dishes has reportedly been announced in North Korea’s state-run media twice in the past — once in March 2012 and again in January 2013 — but no one had ever seen it online until this week. A #tech expert consulted by the Guardian determined the site’s domain name appeared as far back as May 8, 2014.

The cooking site “deals with common knowledge and theories on variety of dishes and how to cook them,” the state-run media is quoted as saying back in 2012. “It also offers such data as origins and anecdotes about dishes and global trend in cooking development. It has a distinctive catalogue for serving housewives’ convenience.”

North Korea must be really serious about this cooking site, because it’s not just on the country’s sad state-run Kwangmyong intranet system, but on the actual, real-life Internet.

The Internet, shockingly, is available in North Korea, but it’s inaccessible to most residents and used primarily by the government. Government websites, like Korean Dishes, end with the “.kp” top-level domain.

If you’re perusing the site, be sure not to miss this most excellent seven-and-a-half-minute video of the Culinary Festival of the Day of the Sun. The background track is poppin’.

Also be sure to check the site if you’re in search of a fabulous mushroom recipe. 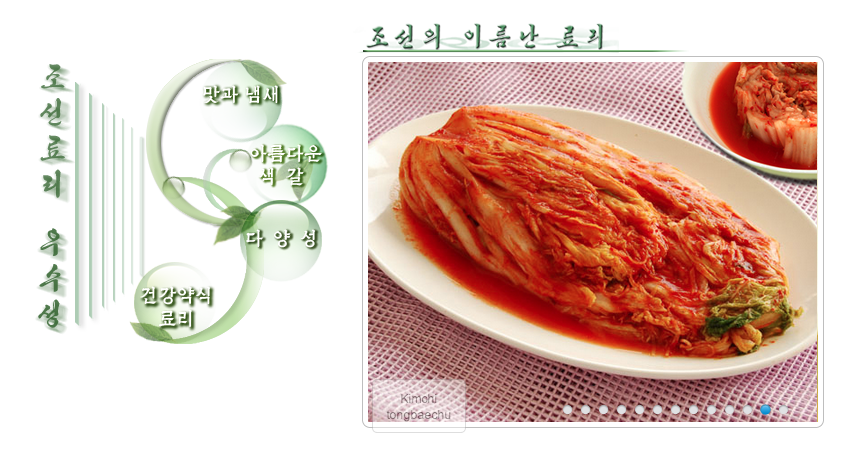