Advocates who want to ban horse carriages descended on City Hall Thursday to rally for their cause—and to tangle with the people who drive the carriages.

NYCLASS and other advocates for animals rallied outside the City Council’s stated meeting Thursday, cheering on supportive council members and seeking to influence others. While Mayor Bill de Blasio—whom the animal advocates strongly backed for election—promised to ban the horses right away, they’re still galloping through city streets, leading to plenty of frustration within the movement to ban them.

“Mayor de Blasio has pledged over and over again to get these horses off of the dangerous streets and into sanctuaries, and we’re here to just really urge the council members to take action on this immediately,” Edita Birnkrant, the New York director of Friends of Animals, said. “We consider it an urgent issue.”

A bill has yet to even be introduced into the council—leading some members to say they can’t yet say whether they’d support a ban—but sources told the Observer this week the council is getting closer to introducing one.

But Allie Feldman, executive director of NYCLASS, declined to provide a firm timeline.

“We’d like to have seen a bill yesterday, but we absolutely understand that the legislative process takes time, and there’s a lot of different players at stake here, and a lot of different moving pieces to crafting legislation and putting it together,” she said. “And we feel very positive that the mayor and the City Council is going to introduce legislation in the next couple of months.”

Ms. Feldman said she also felt positive about whether the group could line up enough council members to pass the bill—saying they’d been working hard within council districts to influence members.

As Ms. Birnkrant spoke to reporters, Joseph Cirnigliaro, a supporter of the horse carriage industry and former driver, loomed nearby.

“Wake up, before they’re gonna take everything from you! They’re gonna take all your rights, your property, and this is no longer America—this is gonna be the Soviet Union all over again,” he shouted to reporters.

Mr. Cirnigliaro also verbally sparred directly with activists, saying there were two sides to the story, to which one woman responded that “animal abuse” only has one side. He also traded barbs with a man who identified himself as a horse veterinarian.

At one point, a fellow horse carriage supporter decked out in a feathered hat cut Mr. Cirnigliaro off and turned on a boom box that blared a song about horses walking through Central Park.

As animal activists cheered on supportive council members walking by—including Councilman Daniel Dromm and Councilwoman Helen Rosenthal—Mr. Cirnigliaro said those looking to ban the carriages were just seeking to grab up the property that houses the stables.

“There’s absolutely no truth to that whatsoever,” she said.

But NYCLASS, short for New Yorkers for Clean, Livable and Safe Streets, hasn’t been without controversy. Law enforcement is reportedly investigating whether there had been any illegal contact between Mr. de Blasio’s campaign and NYCLASS’ independent expenditure attacking ex-Council Speaker and mayoral primary contender Christine Quinn. 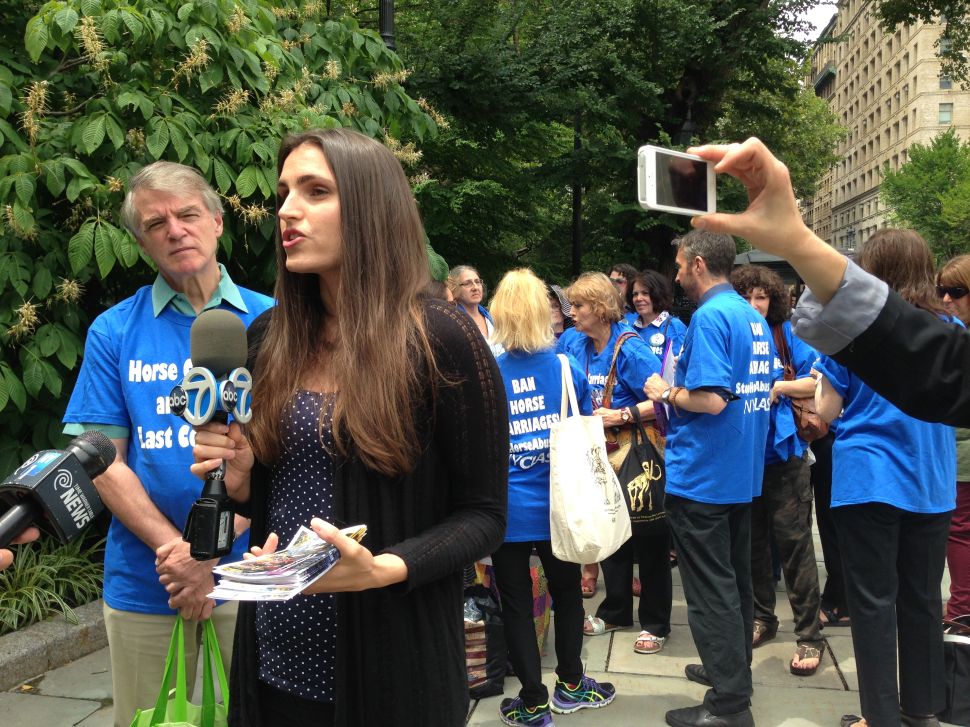