In their latest crackdown, the NYPD is targeting the illegal subway performers who dance, spin and backflip their way through cramped cars in the hopes of making a few bucks, the AP reported.

Police Commissioner Bill Bratton is going after graffitists, motorcyclists, and now subway acrobats as part of his “broken windows” policy of policing. Over 240 performers have been arrested this year so far, compared to less than 40 people at the same time last year.

“Is it a significant crime? Certainly not,” Commissioner Bratton said of cracking down on the seemingly harmless, but mayhem-inducing offense. The question is “Does it have the potential both for creating a level of fear as well as a level of risk that you want to deal with?”

Police have started studying passenger complaints to figure out when and where to place plainclothes officers on the subway, in order to stop the potentially dangerous acrobatics.

A performer named Besnkheru, who sings Michael Jackson hits and Latin jazz songs as his performance partner, Domingo, swings and twirls off the subways poles, disagrees. “We all, as New Yorkers, get these force fields around us. We just try to go inside the train and change the vibe,” he told the AP.

However, police believe that most subway riders share the opinion of Kesia Hudson, who said she “[doesn’t] like all that action right in front of my face” when riding the subway.

Still, performers have come to the the defense of their underground acrobatics, which have arguably become an intrinsic part of New York culture.

“We’re not just knuckleheads. … We’re actually about something,” Andrew “Goofy” Saunders, a former subway performer, maintained. “There’s no reason for being locked up for doing what you love.” 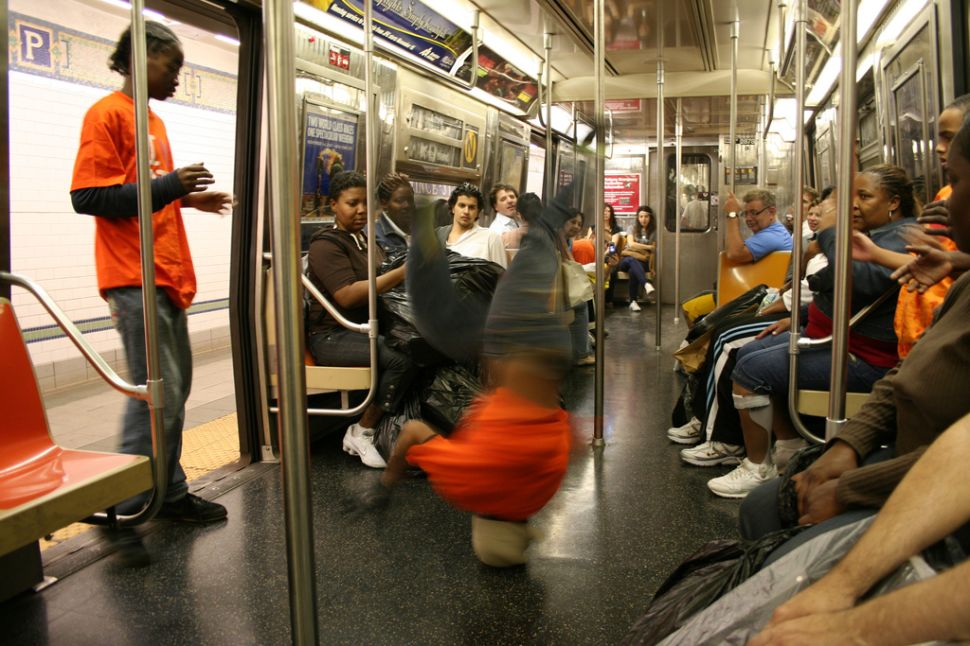