TRENTON – Maryland Gov. Martin O’Malley continues to make moves to position himself in a Democratic Primary for president.

This Capitol Report piece notes that the Dem just made a trek to Iowa and is taking pains to define himself in opposition to former Secretary of State Hillary Clinton on immigration.

O’Malley campaigned here last year for the losing ticket of Barbara Buono and Milly Silva, crushed by Gov. Chris Christie; and like his Democratic rival, Christie is laying the groundwork for his own presidential bid.

Liked in the Garden State among certain pockets of Democrats who for years have made no secret of their admiration, O’Malley can also expect not to be able to nail down support among any of his Garden State friends.

He’s kind of like the Joe Biden of 2008, another Middle Atlantic Irish-American stymied by Clinton in New Jersey.

“I’m rock solid with Hillary Clinton,” said Assemblyman Tom Giblin (D-34), who likes O’Malley but not in a matchup with Clinton.

Another O’Malley fan, Assemblyman Joe Cryan (D-20), likewise can’t see his way to backing him for president as long as Clinton’s in the hunt.

“I backed Hillary Clinton for president when I was state party chair and nothing has changed,” Cryan said. 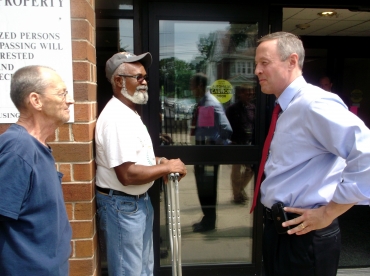