Put together a luxurious country estate, gorgeous summer weather and a couple of examples of truly appalling parenting, and what do you get? Well, a BBC drama series, usually, but last weekend the result was two nights of enchanting opera.

Admittedly, this ideal experience doesn’t always gel at Caramoor, a country house nestled about an hour north of Manhattan in Katonah, N.Y., scene of the annual Caramoor Summer Festival. Sometimes the weather turns blazing hot, sending sunburned picnickers staggering into the al fresco Venetian Theater. Other times, casting for the Bel Canto at Caramoor operas can be quixotic or downright disappointing.

But it all came together this summer for a brace of 19th century operas based on plays by Victor Hugo, lurid tragedies ideally suited for adaptation by the blood-and-thunder composers Gaetano Donizetti and Giuseppe Verdi.

Take Lucrezia Borgia, for example, performed Friday evening. Both play and opera center on the Renaissance noblewoman notorious for poisoning her enemies. The horrific plot turns on her decision to assassinate a band of noblemen who have insulted her. Yet this glamorous monster spares the leader of the group, the young Gennaro. Surely, we think, this boy must be Lucrezia’s lover. But only minutes before the final curtain the truth is revealed: as Gennaro dies of self-administered poison, Lucrezia admits he is her illegitimate son. Even a legendary murderess can feel a mother’s love.

Donizetti rose to the challenge of presenting this larger-than-life character with virtuosic vocal music for the prima donna: flashing scales, wild leaps, trills and, perhaps most daunting of all, a number of scenes requiring the most subtle and muted legato singing. Soprano Angela Meade cleared every hurdle, with bright, limpid tone and utter technical poise. In ornamentation devised by Will Crutchfield, conductor and director of opera for Caramoor, Ms. Meade spanned two and half octaves, with a particularly clarion high D natural for her final cry of “E morto!” (“He is dead!”)

Ms. Meade, a regular at Caramoor, has performed in previous summers such arduous star parts as Rossini’s Semiramide and Bellini’s Norma. She sang these immaculately but without much dramatic fire, I thought. The Lucrezia, though, was different: her voice took on a molten, volatile quality, and her stage movement, even in a concert performance, was alert and electric. She looked regally feral too, in gowns of gunmetal brocade and black sequins, her dark hair tumbling down her back in frenzied curls. Will Crutchfield and Christophoros Stamboglis in Lucrezia Borgia.

Donizetti revised this 1833 opera significantly for an 1840 revival, and, with typical diligence, Mr. Crutchfield presented variant versions of Lucrezia’s music in this performance and one the previous week. But although Ms. Meade sang the shorter, more abrupt ending to the opera on Friday night, she returned after her curtain call to offer as an encore the elaborate coloratura finale she had sung the week before. The audience rose in a second standing ovation as richly deserved as the first.

Surrounding Ms. Meade was a worthy company of principal artists, notably the lyric tenor Michele Angelini as the doomed Gennaro. The light, sweet timbre of his voice immediately evoked the fragile, poetic nature of his character, further enhanced by his ravishing bel canto line. He sent the melodies shimmering endlessly, as if on a single breath. Even a couple of little vocal bobbles in his first aria didn’t detract from a performance rich in charm.

Also impressive was bass Christophoros Stamboglis, whose granite tone evoked the implacable nature of Lucrezia’s husband, the Duke of Ferrara. Mezzo Tamara Mumford, in the male role of Gennaro’s pal Orsini, scored with the opera’s hit tune, the lilting drinking song “Il segreto per esser felici.” In her reprise of the aria, she tossed off a bundle of vocal frills, including a plunge into baritonal depths well beneath low C.

So glittering was this Borgia that the following night’s solid, well-sung Rigoletto felt a bit anticlimactic. Perhaps the most interesting aspect of the concert was the change to compare and contrast this evergreen score with the less familiar Donizetti. The similarities go far beyond the common motif of conflicted parenthood. In fact, the finales of Rigoletto and Lucrezia Borgia, both scenes in which a parent unwittingly causes the death of a beloved child, are musical mirror images.

Mr. Crutchfield’s musical direction in the Verdi was less obviously interventionist than it was in the Donizetti. He did compose a few brief and tasteful vocal curlicues to adorn the transitions from one musical section to the next, but what really caught the ear was the precision and verve of his conducting. The Orchestra of St. Luke’s and the chorus of Bel Canto Young Artists sounded elegant, as befits an opera taking place in a stately Renaissance court, and even the storm music in the final act maintained a certain classical composure.

This approach found its ideal interpreter in the Rigoletto of American baritone Stephen Powell. His voice is large yet lyrical, just right for the warmly romantic moments when the tragic jester allows himself to feel tender affection for his daughter. Yet Mr. Powell had plenty of power in reserve for the dramatic moments, even the fierce denunciation of the courtiers in the second act. Even then, his singing was utterly musical, with every grace note precisely on the mark, but never studied or fussy.

Mr. Powell’s perfection overshadowed his generally excellent colleagues, though Georgia Jarman (Gilda) warbled a deftly phrased “Caro nome” that made this musty aria sound fresh. As the licentious Duke, John Osborn seemed to be battling an attack of whatever bedeviled Mr. Angelini the night before, his muscular tenor cracking numerous times in the first half of the performance. He couldn’t be faulted for timidity, though, as he tackled both verses of the cabaletta “Possente amor,” adding a ringing top D at the finish to boot.

The Bel Canto program lacks some of the things I like in opera: superstar singers, massive virtuoso orchestras, challenging stagings. But on perfect summer nights like last weekend, it’s hard to imagine a place I’d rather be than Caramoor. 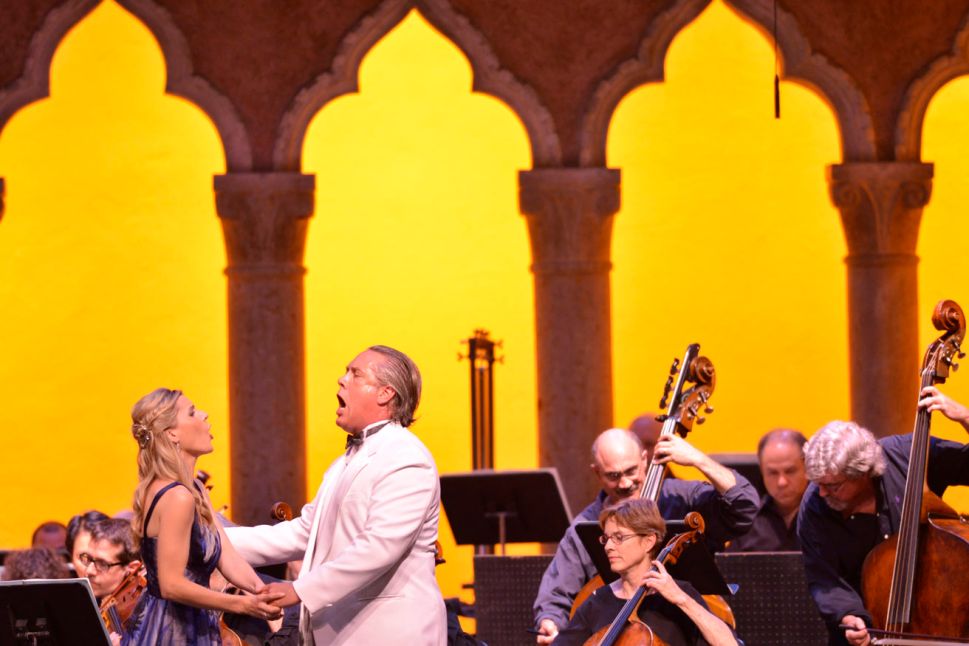