One of those firsts was the nomination of now former council member-at-large Sharon Ashe-Nadrowski to the seat of council president. Nadrowski, a Bayonne native and current member and past vice president of the city’s Irish American League, is the first female in Bayonne history to be elected to the position.

The second was the election of former Hudson County Sheriff Juan “Smiling Eyes” Perez to the position of councilman-at-large. Perez — who’s long criticized the board for it’s lack of Latino representation in a city where the demographic makes 30 percent of the population — is likewise the first Latino in Bayonne history to ascend the seat.

And Davis himself might have been one, as he steps into the position after beating the odds in a cutthroat runoff election against incumbent Mayor Mark Smith. (Davis defeated Smith 51.27% to 48.73%, according to unofficial results from the Hudson County Clerk. Davis received 8,167 votes to Smith’s 7,761, including absentee ballots).

La Pelusa — who was first elected as Third Ward council member in 2006 — compared Davis’ campaign to the makeshift one he put together on peanuts and paper flyers when he ran for the seat eight years ago.

“It very much mirrored this year’s election — the Davis team against Goliath and all his money,” he said.

News of Nadrowski’s nomination might have been a bit of a bummer for Perez, however, who had eyed the council president seat himself in recent months. But he told PolitickerNJ following the ceremony that he fully supports the council’s decision — he voted for her, after all.

“We all voted for her. You know, she’s more qualified. She’s a very hard-working, smart lady and I look forward to working with her,” he said. “At the end of the day, we’re here to serve the taxpayers. I’m ready to roll up my sleeves.”

“My aspiration is I’d like to continue working with the legislature,” said Perez, who gave arguably the loudest and most boisterous speech during the ceremony. “I want to help in any way I can. As for the assembly, if they ask me to be there, I’ll be there.” 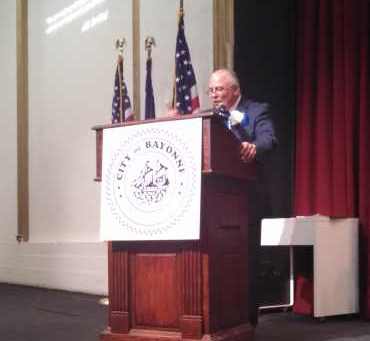