If you attempt to find E.B White’s famous quote on the similarities to dissecting frogs and analyzing humor on the internet, you’ll find no less than –as far as I can tell — 500 different misquotations and variations. Essentially, what people think it boils down to is dissecting both frogs and humor kills the very thing you’re inspecting.

In the introduction to his newest book, Poking a Dead Frog: Conversations with Today’s Top Comedy Writers, Mike Sacks gives the correct version of Mr. White’s quote, from The New Yorker: “Humor can be dissected, as frog can, but the thing dies in the process and innards are discouraging to any but the pure scientific mind…[humor] won’t stand much poking. It has a certain fragility, an evasiveness, which one had best respect.”

What people often miss from the original quote, as Mr. Sacks points out himself, is that there is a kind of person that would gladly slice up a joke as if it were a frog laying on a dissection table…the kind of person who wants to go beyond the funny ha-ha’s and see what lies beneath the humor. Someone like me.

I sat down with Mr. Sacks at the Conde Nast building, where he works on the editorial staff of Vanity Fair, to find out what he has learned from interviewing those “scientific minds” that don’t mind poking a dead frog.

The surprisingly soft-spoken Mr. Sacks is no stranger to interviews like the ones in Pokiing a Dead Frog. His 2009 book, And Here’s the Kicker: Conversations with 21 Top Humor Writers on their Craft, delved into similar territory. Dead Frog, however, has more in-depth interviews that range from people who got their start online to the 97-year-old Peg Lynch, who penned serials for the radio and later the television shows Ethel and Albert in the ’40s and ’50s.

It was this wide range that allowed Mr. Sacks to pin-point a divide between the old guard and the new, especially when it came to television.

“I think definitely the older generation feels the younger comedy writers are coddled,” Mr. Sacks said. “They almost feel like [the younger generation] get a lot more money for a lot less work.”

Do these critics have a point? Take Ms. Lynch for example. In Poking a Dead Frog, she claims to have written more than 20,000 scripts AND turned down a dinner date with John F. Kennedy himself, just to get her program on the air. Then you have Mel Brooks, who describes times in the writers room for his 1950’s variety show Your Show of Shows where “you’d brawl over each line. Each joke. Each idea.”

And then, conveniently placed right before Ms. Lynch’s portion of the book, you have a segment featuring advice from Megan Amram. Ms. Amram, now a writer on Parks and Recreation, got her start writing one-liners on her Twitter. Her first writing job longer than 140 characters after that was with The Academy Awards.


“I think there is a sort of jealousy too, on the old timers part,” Mr. Sacks told me. “A jealousy in that freedom to do what you want, how you want to do it, is so much bigger today.”

He’s definitely not wrong about that, even beyond social media like Twitter. Outlets like Amazon Studios allows just about anyone to submit a script or video, with the chance it is produced for Amazon Prime Instant Video. Piggy-backing off of services like that is the rise of the web-series. Sites like Thundershorts have been cropping up, filled with creator-owned videos that — due to the magic of the interwebs — can be seen by just as many if not more people than if they were on a major network.

Then there is the mecca, the grand-daddy of getting your work onto the internet (for better or for worse)…Youtube. And with more than 1 billion (with a B) unique users, you wouldn’t think it was viable option. But those diamonds in the rough — Workaholics, Broad City, BriTANick, etc., — have all found a home on Comedy Central.

“It’s not guaranteed — there’s a lot more competition now — but you can do it,” Mr. Sacks said. “There’s a sense that if you put out good work and work hard, you can do what you want to do. In the past I never got that feeling…there was always someone blocking your way.”

It’s this increase in both outlet and opportunity that, according to Mr. Sacks, has led to a decrease in major network ambition. Gone are the days where big Fox contracts were the end all be all of comedy greatness. Getting a half hour sitcom onto NBC is no longer the ultimate goal, because then NBC owns your creation. Today, the move is towards streaming, where a comedy writer can not only be a creator, but an auteur.

“It’s almost like a punk, DIY kind of thing,” Mr. Sacks said. “I don’t think people even give a shit anymore if it is even on any specific network, as long as its on the way they want it to be on.”

Which leads us back to what is at the heart and soul of Poking a Dead Frog: advice. With the difference in today’s DIY approach to comedy writing and distribution and the older generation’s hard-earned success, was there a wide range in advice given from those who have made it? Surprisingly, no.

“In general, its basically do what you want, how you want to do it,” Mr. Sacks said. “Put your head down, and just don’t stop. And definitely don’t do it for the money.”

Mr. Sacks, besides being a prolific interviewer, is a pretty successful comedy writer himself (this was my first exposure to him, and it still makes me laugh). With that in mind, I turned the tables on him and asked what advice he would give to a young comedy writer.

It was with absolutely no touch of irony that he gave this quite familiar sounding advice.

Mr. Sacks fully understand the people that are upset about the lack of how-to advice there is when it comes to comedy writing. In between the mostly positive user reviews of his books on Amazon, there are plenty that ring with a “this book didn’t teach me how to make it” vibe.

The reason for this, to him, isn’t because there’s a grand secret to withhold. The reason is because the business of comedy writing is in fact not an exact science. Leave those for the people who actually dissect dead frogs.

“In the end, it’s not that complicated. It’s like any other job. You just have to work hard and never stop,” Mr. Sacks said. “You’re not getting 20 credits for your PhD here. You’re not going for your doctorate. You’re on your own. You’re off the path and into the woods. But that’s the way it should be.” 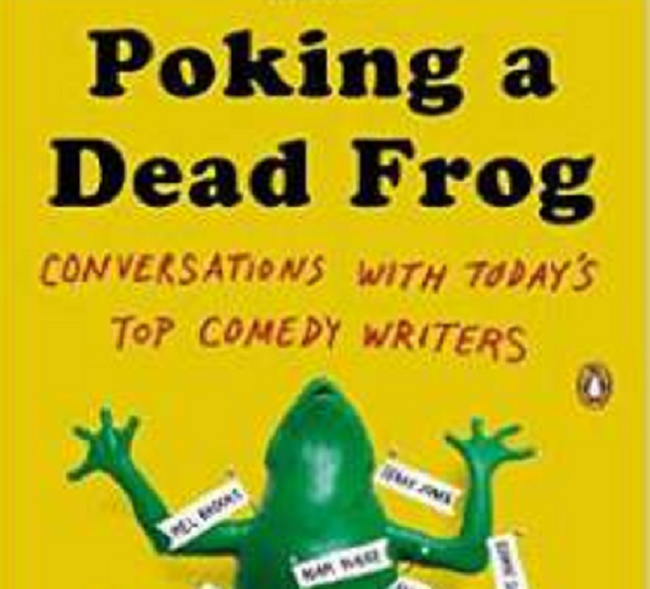