The windows of IDB on 5th Avenue were defaced this afternoon by demonstrators protesting the war in Israel and Gaza. (Photo obtained by the Observer)

It was not a normal summer Friday for the employees of the Israel Discount Bank, on 511 5th Avenue.

According to tweets, various employees (who wish to remain anonymous), and emails obtained by the Observer, the bank’s windows were attacked and smeared with fake blood as pro-Hamas demonstrators staged a “die-in” on the sidewalk in front of the bank.

An employee of IDB who works at 511 but cannot give his or her name without authorization said in an email obtained by the Observer, “This afternoon, there was [an] anti-Israel protest of about 30 people in front of Israel discount bank … They defaced the front windows and sidewalk with fake blood. The employees were holed up inside and the doors were locked. No police presence beforehand.”

According to another source, “one of the IDB security guards was splashed with paint on the back of his shirt.” The Observer later learned that the security guard who’d been painted has the first name James.

Another employee recalled how the situation had developed.

“Basically around lunch time there was a big group of people. I couldn’t see much because I saw only out of window because we weren’t allowed to go outside. They were with flags basically screaming about the bank funding terrorists and some other nonsense” this person told the Observer.

“They made a scene with paint. It was like someone was shot — there was all red paint on the window which was washed afterwards. So obviously, it was not a safe environment as we were not allowed to go out side and afterwards we were told we better leave work by 3:30 because they are going to come back. There was this amount of police. It didn’t last very long” the employee recalled.

According to this employee, the protesters were also throwing flyers in the air. After splashing the windows with fake blood, the 30 people group marched to the front of the main library.

One person close to the situation noted that the demonstrators continued on after mostly being allowed to leave the scene without arrest. He declined to allow his name to be used but took the bank to task for its cautionary approach.

“It’s amazing that in the city of New York terrorist sympathizers can be permitted to continue to march after this violence.  … And shame on IDB for bowing to terror and closing early.”

However, according to some pictures obtained from twitter, some pro-Palestinian supporters were apparently arrested by the NYPD.

A pro-Palestinian activist being arrested during a die-in outside of IDB Bank in NYC today. #FreePalestine pic.twitter.com/IpgkE6k95R

#FreePalestine activists were just arrested in NYC after they threw red syrup on IDB Bank and did a die-in. pic.twitter.com/rSKY3Q0qWm

Bank management decided to send everybody home early and took down the yellow IDB flag that waved in front of the lobby. At 3:30, the Observer saw employees leaving the bank. This afternoon, there was a disturbance in front of the 511 building as a result of a protest. We understand that there may be additional protests in the vicinity this evening. In an effort to avoid any potential inconvenience to our staff, we have decided to shorten the business day. We ask that all employees finish their workday no later than 3:30PM.

To ensure the safety our all our employees and with the full cooperation of the New York Police Department, there will be a police presence throughout the afternoon and evening in and around our building.

The well-being and security of our staff is always our top priority. We wish everyone a good weekend.

UPDATE (6:05 pm July 25, 2014): A youtube video has been posted revealing an essentially peaceful demonstration with five protesters first spraying red liquid on the windows and then lying down on the street. The police arrive almost instantly and tell them “Yo, get up.” Then other protesters in the crowd begin to chant “The people united will never be defeated” and “Free Palestine” and “Stop the War and Occupation.” 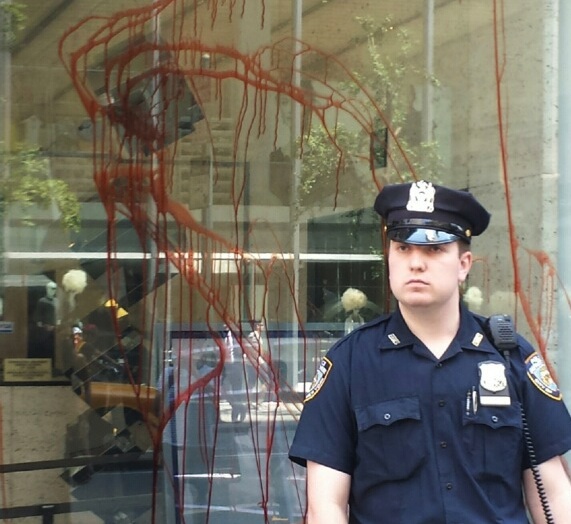