“Sometimes more is better,” Martha Stewart Living crows of its recent recipe for chocolate ice cream cake with hazelnuts and marshmallow swirl. Agreed, when it comes to ultra-decadent desserts. However, that almost never holds true for summer group shows. “Purple States,” though, is the rare and wonderful exception: a jam-packed smorgasbord of artistic delights that feels like even more than the sum of its excellent parts. Organized by the artist Sam Gordon, it includes a shambolic, multigenerational mixture of some 60 outré-minded artists, who are cleverly presented in pairs—one, a non-mainstream or folk figure, the other, a more mainstream practitioner with shared interests. Sans checklist, I had trouble telling some of them apart, which lays bare the false and silly (but long-held) “insider-outsider” dichotomy that now finally seems to be waning.

Where to begin? How about with the rough-hewn panel painting by Brooklyn painter Chuck Webster, which is balanced out by tiny, intimate drawings, in soot and spit, by the self-taught Idahoan James Castle (1899–1977) that hang around it? (One little Castle heartbreaker, of a shirt, is even installed directly on Mr. Webster’s painting.) A mandala-like target made of thread and paint, by New Yorker Tony Cox, joins a brushy, similarly shaped 1968 painting by the inimitable Texan Forrest Bess (1911–77). Gina Beavers’ meaty, funny and vaguely creepy paintings of painted hands hang alongside Morton Bartlett’s (1909–1992) photographs of his rosy-cheeked dolls, which easily share those adjectives (with a bit more emphasis on the creepy).

The combinations shoot off all sorts of delirious aesthetic and emotional sparks. A spare Richard Tuttle sculpture carefully sits beneath a quiet tantric painting. A Katherine Bernhardt pattern painting floats delicately above a trove of wild Moroccan carpets from her husband Youssef Jdia’s Magic Flying Carpets outfit. A glowing reverse-glass painting, embedded with a white sock, by the indefatigable Brooklyn gadabout Brian Belott hangs with a thoroughly bizarre, thoroughly pleasurable painting of cartoony football players by the indefatigable collector, dealer and artist William Copley (1919–96)—a match made in heaven, exploding with effervescent energy. I could go on. There is something for everyone.

Meanwhile in the front of the gallery, Mr. Gordon has installed a temporary outpost of Cafe Dancer, the Lower East Side bar that Jessie Gold and Elizabeth Hart started in 2013, and which quickly became the watering hole of choice (and occasionally a performance venue) for various overlapping gangs of young art types. The front desk at Edlin doubles as a bar (alas, open only for select events), and a wall is lined with work by artists who have been involved with the enterprise, like Corinne Jones, Sadie Laska, Michael Mahalchick, Frank Haines and Naomi Fisher.

Though the pop-up struck me at first as just a pleasant little summer diversion, I’m also tempted to think of it as a rejoinder to all of the harping on about the increasing expense of living in today’s New York, and the fact that artists are being pushed apart, or out of the city altogether. Yes, those things are true. But Cafe Dancer, and other young galleries and organizations, have shown that, even in these rough-and-tumble times, artists can band together and establish new spaces in which to meet up, argue and create, whether in a below-ground storefronts on Orchard Street, temporarily, in a Chelsea gallery (with outrageous new condos sprouting up across the street), or even, as “Purple States” so deliriously underscores, in rich, underexplored areas of art history. 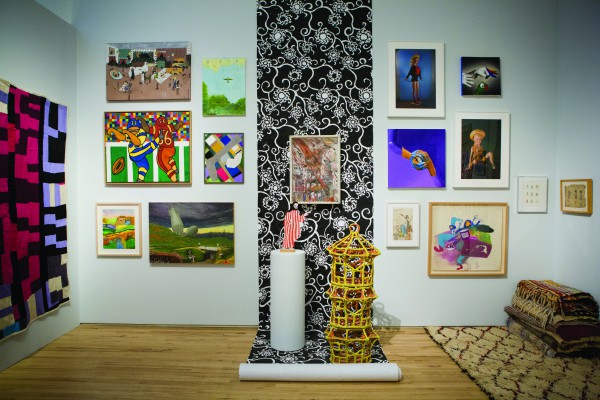