A slew of elected officials including Congressman Charlie Rangel and Congresswoman Carolyn Maloney slammed the city’s policy of forcing seniors and single parents with Section 8 vouchers to move into smaller apartments today.

“A bedroom is not a luxury,” Rita Popper, founder of Housing Alliance Against Downsizing, said at a City Hall press conference featuring federal, state and city lawmakers.

The policy, which also allows residents to stay in their current apartments but pay more rent, was rolled out under the Bloomberg administration to cut costs after federal funds for HPD were sequestered — resulting in a $35 million cut to the program in New York City.

“It is wrong to tell a senior citizen, to say, ‘You have to give up your bedroom, sleep on your couch, and pay the same rent,’” Ms. Maloney said.

But if the agency hadn’t looked to cut costs, it would have had to cut 3,000 vouchers, knocking those people out of the affordable housing program, according to HPD.

“HPD has taken tremendous pains to ensure that despite these devastating federal cuts, not a single one of our families in the Section 8 program has lost their voucher,” HPD spokesman Eric Bederman said. “That’s no small achievement, and it reflects our commitment to helping our tenants through this crisis. However, we are extremely concerned that if Congress doesn’t end the Sequester, the deep cuts to Section 8 will restart in 2016, putting our tenants at risk yet again.”

Ms. Maloney said she knew HPD faces financial woes, but that moving tenants — often seniors — around was the wrong way to save money.

“The agency has to do something, but this strategy punishes the most vulnerable New Yorkers, and it’s wrong,” she said. “And we can’t even be sure of the cost savings downsizing will yield, because they have no information about it.”

Mr. Rangel offered an emotional analysis of what many seniors are facing — a fear of losing their home and being sent to a nursing home or the hospital, and being “deathly afraid” of losing the few friends they have in their communities.

“There’s no compassion in a computer,” he said of the system of downsizing.

Mr. Rangel painted the lack of affordable housing in the city as a federal problem, and ripped the model of building 80 percent market-rate housing and 20-percent affordable units.

“There should be a moratorium on luxury housing, because it’s a national crisis that we don’t have affordable housing,” he said. “80/20 makes no sense at all — if you needed a hospital and they told you 80 percent of it would be for well people, and 20 percent set aside for sick people, you’d say, ‘That’s crazy.’ Well, we don’t have a crisis in luxury housing — the crisis is in affordable housing.”

He said the federal Department of Housing and Urban Development is “operating under a Republican-controlled house, they don’t have any sensitivity except hatred for our president.”

But while most council members and state legislators present appealed to the mayor to help change the policy, lawyer Norman Siegel, who once challenged Mr. de Blasio for public advocate, took a harsher tone and said advocates might have to take the city to court over the policy.

He said the mayor knew about the press conference — and even walked by it unnoticed — but did not attend.

“The mayor I voted for, the person I believed in, would have stopped, would have walked in here, would have shown the compassion and caring that he claims he’s about, and would have talked to the people here about this issue,” he said.

Mr. Siegel vowed not to let seniors be forced into studios. “If that means that not only in the city but in the state and national, the image of Bill de Blasio as a hypocrite, if that’s what has to be, so be it,” he said.

While advocates said it wasn’t acceptable to move disabled residents into smaller units, the city does take into account if people have disabilities or other reasons they cannot be downsized into smaller units, HPD said — it has granted 540 “reasonable accommodation” requests, and another 250 are pending.

This story has been updated with information from HPD. 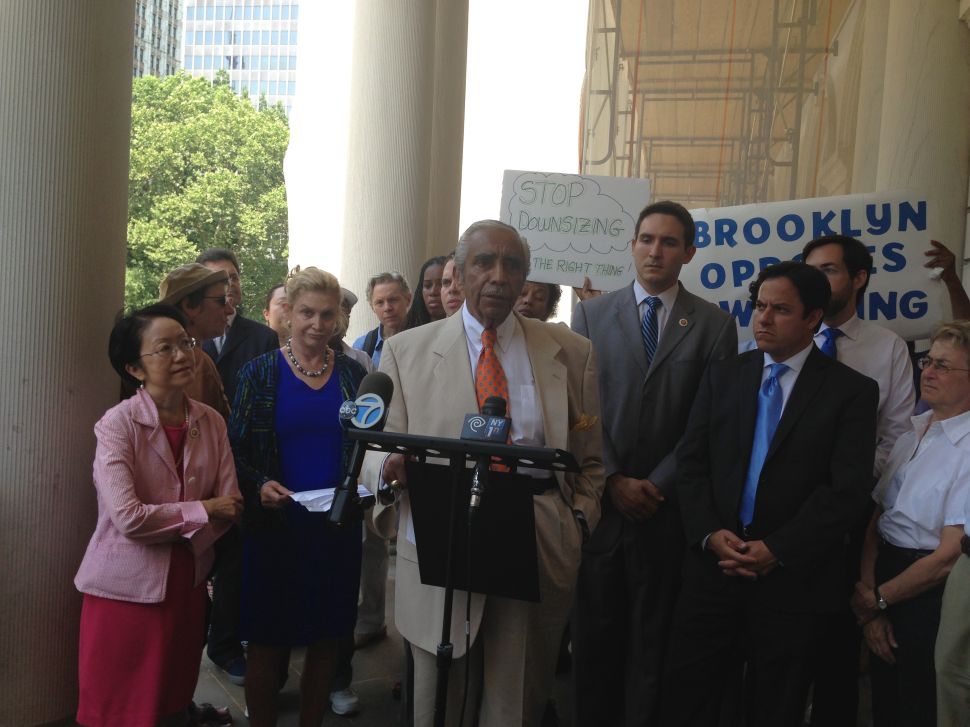