Deep Net: the part of the internet underneath the surface,inaccessible to conventional search engines. Deep Net(flix): Opening Netflix Roulette and dialing the ratings setting way low.

Last month, I reviewed Nazis at the Center of the Earth. This week, Deadball. I do this so you don’t have to.  If at any point during this review you start to think I’ve suffered a stroke, and am just typing random nonsensical words, don’t be worried. I’m actually just describing the events in Deadball. This movie, a “splatter comedy” import from Japan, is…well, it’s weird. How weird? Let’s talk about the opening scene. Our main character, Jubeh Yakyu, is having a baseball catch with his father. His younger brother, Musashi, looks on. The father urges Jubeh to give him his best pitch, and Jubeh gleefully accepts. So far, so normal. Jubeh then propels himself into the sky, launching the ball from the stratosphere. The ball, now more of a comet, strikes his father in the face. Blood sprays. The father promptly explodes.

Aaaand we are only two and a half minutes in. Sigh. The father, despite being hit by a deathball (!!) and exploding seconds ago, pulls it together long enough make Jubeh promise to take care of Musashi. Flashforward a couple years, and we find out that Jubeh is not only terrible at not murdering his father, he’s also terrible at following advice. Jubeh is being processed into the Pterodactyl Juvenile Reformatory for murdering 54 people in two weeks. Jeez, Jubeh. His murders include “dropping TV’s on people” and “blowing up a batting cage.” Jeeeez, Jubeh. Also he’s 17 now, despite looking like this.

Governor Mifune, who runs the reformatory, gives Jubeh some advice on getting out: “Join the baseball team.” I don’t know much about the Japanese judicial system, so I’ll accept that. (Ed. note: Just in general, Japan’s love of America’s past time really freaks me out. Because you just know they are better than us at it.) But, due to his father-exploding fastball, Jubeh has vowed never to play baseball again. Jubeh is led into the facility, where he catches a glimpse of the baseball team, who are just beating the shit out of a kid with glasses for no reason. Prison, right? When the prison roughians get a look at Jubeh and his incredibly mature 17-year-old features, they decide to start some trouble by throwing a baseball at him. Jubeh, because this is Deadball and we’re only about a half-hour in, grabs the nearest dwarf, uses him as a bat, and sends the ball careening back at the guy who threw it. Naturally, this is the result.

At one point Jubeh tries to drown his own right hand. This makes sense at the time. Luckily his roommate, who happens to be that kid with glasses that got beaten up by the baseball team before, stops that from happening. The roommate, named Shinosuke in case anyone out there was wondering, reveals that Jubeh’s little brother is being held in the same reformatory. So this basically just became Orange is the New Black, if Orange is the New Black did like a shit ton of drugs. Speaking of drugs, this revelation leads to Jubeh having a vision of his little brother as a kid, murdering a ton of people. I’m not sure what the point of this was, but vision-Jubeh does manage to bring up an incredibly valid, if not hypocritical point.

Lets speed the insanity train up a little, shall we? Fast forward to the baseball team’s first game, against St. Black Dahlia High School. I checked. That’s not a real high school in Japan. Plot twist, though, this isn’t a game at all. It’s a whole thing set up by that Nazi headmistress, in which the goal is to kill the other team in outlandish ways, and she judges it based on creativity. She also invited some of her Nazi friends over to watch. Basically, this just became The Hunger Games if, you know, The Hunger Games did like a shit ton of drugs. Sidenote, what is up with these bottom of the barrel Netflix movies and Nazis? No matter what, they always find a way to pop up. I’m starting to feel like the Indiana Jones of recapping terrible movies. At least in Nazis at the Center of the Earth, they were definitely evil, albeit zombies. Deadball‘s Nazis are just there to party and happen to be wearing swastikas.

Moving on. Everyone on Jubeh’s team minus his cellmate and himself are killed. Everyone. Even the dwarf, who gets crushed by a giant mouse trap. Yeah. None of that matters though, because keep the plot twists coming Deadball Jubeh’s little brother is actually still alive. Good news, right? Wrong, people, what  review have you been reading!? Musashi was being kept alive only as fuel for a GIANT NAZI BASEBALL ROBOT. (Seriously, though, Nazis at the Center of the Earth had a giant Nazi robot in it, too. Give me variety, Netflix Roulette). 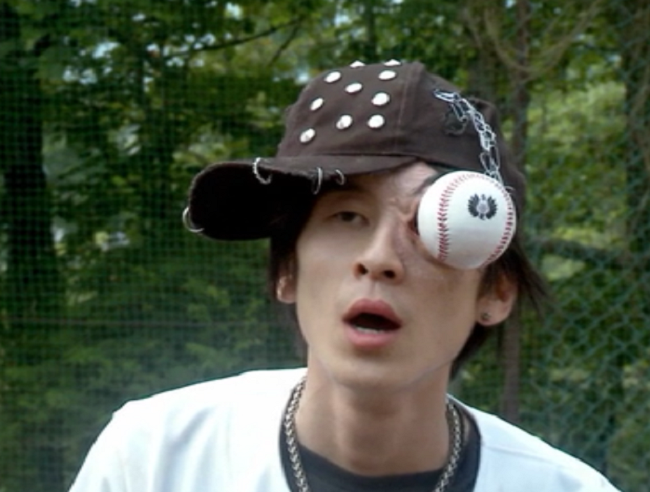