Greetings from the weird part of Netflix! The area off the beaten queue, where you’ve scrolled down the “Random Picks” section a little too far, or took the red pill with Netflix Roulette and the familiarity of Breaking Bad and Orange is the New Black is miles away.

Today’s selection is brought to you by the same people that made Sharknado AND Sharknado 2. It’s called Nazis at the Center of the Earth and it’s, well, it’s a fucking dog-poo terrible piece of film making. But, like, in the most beautifully dog-poo terrible way possible. Let’s begin, shall we?

Dr. Paige Morgan and Dr. Mark Maynard are drilling in Antarctica for…medical research? That doesn’t make any sense, but there they are with a giant drill. Mark is romantically involved with the dispatcher back at Nifleheim station, May, which isn’t particularly important because every doctor in this movie is randomly linked romantically to another doctor at the station. I guess it would get lonely living in Antarctica.

Paige, despite being a top doctor in her field, is a little, uh, slow and prone to making over-enthusiastic faces. Isn’t that right Paige? Attagirl, Paige. Whilst aimlessly drilling into the Antarctic, Paige and Mark hit something metal and COVERED IN SWASTIKAS (?!). (Ed. note: Even the Thing isn’t anti-Semitic, right? It was never like ‘Oh, I won’t inhabit and then replicate/destroy the vessels of those unclean sons of Abraham.’) Despite being surrounded by an endless tundra of pure white, a group of men in gas masks sneak up on Paige and Mark, knocking them unconscious and kidnapping them. These mysterious gas-masked men are wearing swastika armbands…could they be Nazis?! Nazis AT THE CENTER OF THE…sorry we’re not there yet.

Meanwhile, back at the Nifleheim Station, a rescue team (made up of doctors and scientists, of course,) assembles after Mark and Paige fail to check in. The rescue team is as follows: Dispatcher May. Paige’s beau Lucas, a doctor with the last name Blechman (ruh roh). Two equally unimportant guys with equally stupid hair that end up dying anyway. The sort of flirty doctor who inevitably provides the straight-to-DVD nudity. Finally, there’s the blonde-hair-blue-eyed couple of Silje and Adrian Reistad (double ruh roh).

Anywho, this crack rescue team follows the blatantly obvious tracks left behind by the Nazis straight into an underground world, where the temperature is inexplicably hot and everything is covered in swastikas. And yes, in case you were wondering, it is AT THE CENTER OF THE EARTH. In this city we, the lucky audience, are treated to such an insane amount of plot twists that it wouldn’t shock me if the reason this movie’s been buried in Netflix is it’s been know to cause viewer’s heads to explode.

Let’s rundown the best ones.

Turns out, Adrian was working with the Nazis the whole time. He led the group there on purpose–like, move over Darth Vader you’re no longer my favorite movie villain. After I picked my eyeballs off the floor I watched Adrian turn over his friends to Dr. Josef Mengele, a real-life Nazi played here by Christopher Karl Johnson. (In all seriousness Mr. Johnson is a surprisingly good actor. I feel like someone told him this was an audition for a much, much better movie, and then secretly filmed it).

And what do the Nazis do? Well first things first, they aren’t happy to see Dr. Blechman and they aren’t afraid to lazer-gun him to death as proof. Oh yeah, the Nazis have lazer guns.

Oh yeah, Paige is working with the Nazis now too! Like, stop, I can only take so much, especially because I’ve seen Indiana Jones and the Last Crusade like a million times, and I swore I’d never be fooled by a beautiful Aryan shiksa with dubious intentions again. Apparently during her captivity she had a weird bonding moment with the Nazis experimenting together (medicine recognizes medicine, I guess) and now she doesn’t mind playing along. What happened to Mark? Well as you may have guessed the Nazis have stuck around since WWII by constantly replacing their organs, bones, and skin with other people’s organs, bones, and skin (naturally).

So they cut off Mark’s face ad put it on someone else’s body.

What else, what else? Oh, Silje watches May get her brain removed by Nazi doctors and promptly vomits.

“What is wrong with you, you’re never squeamish!” Adrian yells.

Because fucking robot Hitler, that’s why.

I’m not going to spoil the end of this move for you, but its worth it for sheer ridiculousness. And I already told you about Robot Hitler. Honestly. if you’re still reading this and have’t rushed to your Netflix by now, I don’t know what your deal is.

Alls I know is, if you want to hear the phrase “Come on you bobble-headed, zombie Nazi, son-of-a-bitch” spoken in a dead-serious context, you’ll add this one to your queue. If anything, do it for Paige. 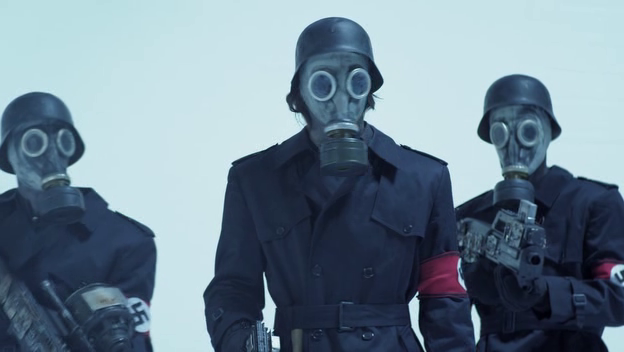