Allow me to preface this episode by talking about myself. Yesterday I had to go to the dentist to get a cracked molar removed, an experience that cannot be improved by any quantity of Vicodin or smoothies. As I lay comatose in front of the television watching this episode, icing my jaw, I had a possibly pain medication-enhanced epiphany. Josh is Kristen’s cracked molar, and he needs to be removed before he can do any further damage. You’ll see what I mean.

The episode opens with Kristen really setting an excellent tone for a double date with her, Josh, Jonathan and Heather by trying to get Josh to engage in their favorite shared pastime: the exchange of hot goss. Unfortunately, Josh won’t cede any ground to Kristen on the “Heather is mean” issue, because Heather has experienced running her own business, which is apparently the only type of life experience that qualifies you to comment on someone else’s behavior. Kristen keeps trying to get someone at the table to concede that she has a point, and the closest she gets is when Jonathan admits that Heather can be a bit of a “B-O-S-S.” Ugh, enough of this. 10/10 Sheryl Sanbergs agree! Fight the real enemy, Kristen! (Hint: it’s your husband.)

Meanwhile, Mario has decided to perform at an open mic night at Birdland Jazz Club (just down the block from the Observer offices. Hi guys!), singing a little ditty called “Effortless,” I guess as a way to troll Ramona/the viewers playing along at home about the state of their marriage. He rehearses with Ramona’s “gay husband” on piano. It’s…fine, as far as plot contrivances that don’t make a ton of sense go.

“Mario’s sung before in small groups in hotel lounges we’ve stayed at in Europe,” Ramona says, and I’ll leave it to you to decide  if that has ever actually happened or if this is all a Ramona Pinot-induced fever dream.

Sonja is interviewing a new intern, who majored in psychology. Major red flag for Sonja; she doesn’t want to be analyzed. Also, we learn that she has Uncommunicative Bro Intern Tyler read her email and then text her anything important. Aviva interrupts the interview and they send the prospective intern packing so that Aviva can emphatically take her inhaler at Sonja.

Apparently the reason for this sit-down is that Sonja has taken it upon herself to relay all of the Aviva-related gossip from Montana to her. She tells Aviva that everyone was “talking about [her] the whole time,” which, while surely warming the cockles of Aviva’s narcissistic heart, isn’t remotely true. Is this Sonja’s job interview for staying on the show? Does she have “professional pot-stirrer” somewhere on her resumé? (JK, Sonja probably thinks resumés are declassé.)

Anyway, Aviva is furious and starts yelling about how her lung capacity was “below 50%” and maybe she’s lying about her fake leg too — oh, those awful women! She takes a puff on her industrial-sized inhaler to make her point, which I don’t think is how her doctor envisioned that thing being used. She concludes that she needs a break from the ladies, and I couldn’t agree more.

In filler this week: the first editions of her book have come to Carole’s insane-looking apartment, which appears to be getting completely gutted by her contractor. Where is she living in the meantime? Kristen goes with Ramonja to a plastic surgeon’s office, where they tell her she needs an eye lift. Luann is trying to have romantic photos of her, Jacques and their two dogs taken in order to save their relationship (????). Sonja and Harry might genuinely be in love.

Kristen has decided to take Josh at his word that he would come home more often if there was a hot meal on the table, so she is preparing dinner. It’s 6:30 and he was supposed to be home at 6, so it’s safe to say it’s going pretty well. She finally calls him to see where he is and he berates her about being on a conference call “with six different people” (this phrase is repeated a billion times), leaving him no time to do anything frivolous like text his wife to tell her that he is running late for dinner.

Here is yet another way, to add to the million ways we’ve already seen, that Josh sucks. If you’re a real G, you can leave to make a 6pm dinner date with your wife, because you are the boss and no one will say anything about it to you. The fact that it is not in Josh’s power to say “You jokers need to figure this out and email me X, Y and Z this evening because my time is precious and I have to go” says to me that he is not even 1% as good at business-ing as he thinks he is. Ugh, he is the worst.

He finally makes it home where he says a half-hearted hello to his son and doesn’t pick up his non-mobile daughter, who is struggling out of her chair. He makes fun of Kristen for burning the potatoes and tells her he’d prefer to go out to eat. She calls him mean and he says, verbatim, “I’m never mean to you.” He won’t stop talking about how Kristen doesn’t understand that the rules of time, space and courtesy work differently for people who go to work in offices. He demands a mediator to help her see that he is right. Kristen starts laughing crazily about how if Josh admits that they need a mediator, their marriage really is in trouble. These two. #FreeKingsley.

In the final scene of the episode everyone gathers at Birdland to see Ramona’s “two husbands” perform. Also, Heather is going to sing something. All of a sudden, Ramona starts yelling about how Luann isn’t going to sing, and why won’t she sing a song, is it because she’s afraid to sing without Autotune? It’s super aggressive and out of left field, and makes me wonder if Ramona planned this entire event as a way to troll Luann.

She points out the piano accompanist and says that Luann once claimed that he only played for her.

“He plays for Liza Minnelli, you cow!” Luann screams. My heart is so full.

Mario gets up and performs his song and does okay, in a “Dad channels Tony Bennett after a couple of Long Islands” kind of way. Ramona stares blankly and perhaps a little sadly into space as he goes on and on about “effortless” love. Harry and Kristen are going to TOWN on mini drumsticks as he sings. It’s a lot.

And then…Heather gets up to sing and does a song she learned from her late father, who was a musician, and it’s totally adorable? My DVR cut off immediately after she was done, so maybe I missed Kristen ascending the stage holding Josh’s still-beating heart in one hand to lead the audience in a rendition of The Dixie Chicks’ “Goodbye Earl,” but if not, what an odd, light ending to such a dark episode. See you next week! 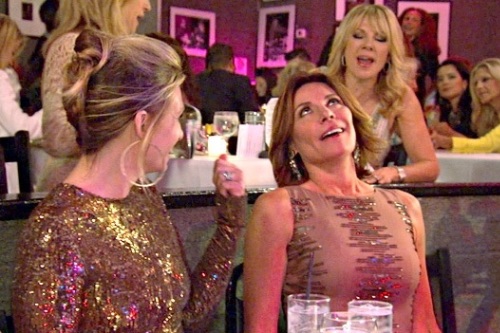