I wish that The Real Housewives of New York City would take a cue from prestige cable television and put together a more exciting penultimate episode, because this one, the second to last before we bid goodbye to these ladies for the season (and possibly forever), was a SNOOOOOZE. Everyone behaved themselves, for the most part, and though some intriguing conflict was set up for the finale between Luann and Sonja, it wasn’t enough to keep me from checking my phone a couple times during the episode, and usually I watched my reality television with Clockwork Orange-style focus, lest I miss a single side eye.

The big event this week is Carole’s 50th birthday party, which Heather is planning and about which Carole is being a huge monster. Among her list of demands, relayed to Heather by two new assistants: 1,000 white lights, 5,000 rose petals, and bringing the chandeliers from her apartment to the venue.

“What? She’s smoking crack!” Heather says. She’s the best. I do think Carole is playing up the “birthday diva” thing to be amusing, but it is unfortunately not very interesting. Whomp!

In other news, Harry and Sonja are nesting. They are getting a dog! Will Sonja love this one the way she can’t love poor Marley? I worry about Marley probably once a day. Sonja wants to see if Harry will be able to commit to a dog, and by extension, to her. I ship it.

Kristen and Josh have taken the important step of finding a therapist unscrupulous enough to let production film a marriage counseling session. Sitting on the couch, wearing a “Love Me Tender” sweatshirt, Kristen gets to the meat of the problem right away: she and Josh never talk about anything. Ever. Including, you know, having children. The therapist makes them each give the other a compliment (Kristen: Josh is a good provider; Josh: Kristen always puts the kids first) and gets them to agree to come up with a system that helps Josh to make Kristen feel like she is a priority even if he has to renege on some commitments to her every now and then. Kristen suggests he express this via expensive handbags. Josh seems open to working on their communication, but he also wears a fedora to Carole’s party, so let’s not bet all of our money on the Taekman marriage just yet.

Meanwhile, Ramona is trying to help Avery pack for school, while Avery does that very teenage thing of becoming overwhelmed by the magnitude of a task and opting to just scream “I DON’T KNOW WHERE TO START I HAVE SO MUCH STUFF I DON’T KNOW HOW PEOPLE DO THIS” instead of taking any action whatsoever. Ramona, faced with someone more hysterical than she is at the moment, is suddenly the picture of calm and practicality. This is the secret with Ramona—just be 100 percent more turnt up than her 100 percent of the time, and she’ll be super normal with you. Ramona tries to help by sorting Avery’s shoes. She lines up her Marc Jacobs sandals and her gray sneakers and her running shoes for working out and her boots and, and, and …

“I didn’t know you had this many shoes. I think I went to college with four pairs of shoes,” Normal Ramona says. Avery responds to this with an eye roll and a request for her mother to NEVER MENTION HER OWN COLLEGE EXPERIENCE AGAIN, UGH.

Since no one likes Aviva and won’t invite her anywhere, her only scene is going to visit a prosthetics center with a woman who lost her leg in the Boston Marathon Bombing. Good for Aviva, seriously. It’s great that she does this kind of work. Also, get off the show. If you can’t fight with people at dinner parties because you’re no longer being invited to dinner parties, you are of no use to this franchise.

Sonja meets her “Christian mystic” Thomas John for a drink and my ears perk up, because how could they not? He’s a Christian mystic! He pulls out a stack of pretty janky looking Tarot cards and gives Sonja a reading, right there in the restaurant. What a delight. Surprising no one, least of all Sonja, the cards are telling Thomas John that her “spiritual journey is really important right now.” Then he flips over another card and CROSSES HIMSELF.

Apparently, there is “one devil in [Sonja’s] inner circle” and “it’s actually a woman.” Oh, what to do? Sonja is immediately like, “Is it Carole?”

It’s not Carole. “You know, Luann’s been giving me a lot of shit,” Sonja, who is in talks to join the cast of True Detective season two, concludes.

Heather is running around decorating for Carole’s party. Everything looks insane and kind of cheap, though I think that’s more of a function of Carole’s dumb theme than Heather’s party planning skills. The theme is “Midnight in the Garden of Good and Evil,” and there will be no snakes, but not for lack of trying (The More You Know: having a snake in a restaurant is a health code violation, at least in New York City).

Everyone arrives at the party dressed in black or white (except for Carole, who arrives in red, claiming not to like being the center of attention), and despite the chintzy theme and Josh’s fedora it looks like a fun crowd. Sonja opts to spend her time trying to get Harry to DTR, and then, in a scene that I would suspect was scripted if I thought either Harry or Sonja was capable of memorizing lines, he takes her face in his hands romantically and kisses her, vowing that he’s in it to win it, and then he gives her some kind of promise ring. Now I see what Thomas John was saying when he was talking about her money problems “working themselves out.”

BUT WAIT! Luann is there looking beautiful and feeling bummed because she and Jacques have split. Reading between the lines, it apparently has something to do with Jacques wanting kids and Luannn being super done with having kids. While this is disappointing, because I like Jacques and think he and Luann make a fun pair, without that breakup the setup for the most Dramatic RHONY Finale Ever (whoops, sorry, I got momentarily possessed by Chris Harrison) wouldn’t be possible.

Sonja goes running over to Ramona like the lead in a romcom, all “Harry gave me a ring! He’s afraid to lose me because he knows I’m ripe for the picking right now.” I adore Sonja’s high self esteem. Ramona is psyched for her, but while they’re talking we get voiceover/subtitled, and therefore rather suspicious, dialogue between Luann and Harry that I can’t remember exactly but is somewhere along the lines of “I’m single now”/”Wanna get out of here?” You know, the type of conversation you overhear/have while settling a bar tab at 3:57 a.m.

Next week: the prosthetic leg-throwing incident we’ve not only been promised, but that we deserve. 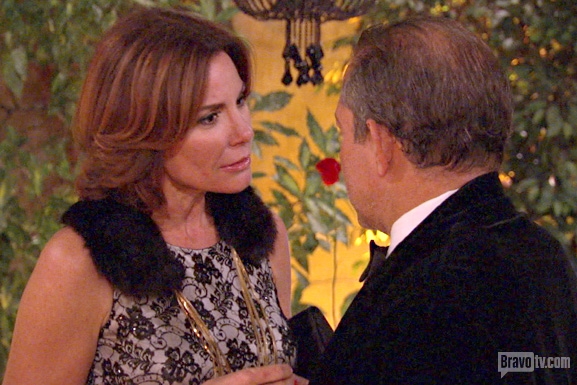