They grow up so fast.

Sunday marked the 25th anniversary of Seinfeld’s Pilot episode, which aired July 5, 1989, and no one celebrated with more vigor than the Brooklyn Cyclones. The Mets-affiliated baseball team held a special “Salute to Seinfeld Night,” complete with a free “Magic Loogie” bobble-head give-away. Who does the bobble-head think he is? He’s Keith Hernandez.

But the Seinfeld-ian fun didn’t stop there. Click here for a full rundown of the days’ events. Yeah, you could have came for the Elaine dance-offs or the “airing of grievances,” but what you really stayed for was the puffy pirate shirts.

Regrettably, my fellow Seinfeld fans at tvDownload and I couldn’t make it to the festivities, but I did want people to know that this show has shaped the way I watch TV, and even lived my life.

You see, Seinfeld taught me real lessons. Real, and fantastic. It coached me on how to be the master of my domain. It gave me the confidence to drape myself in velvet, and never wear sweatpants. Sweatpants tell the word, ‘I give up.’

Oh, and dating. It is the reason I’ve avoided low talkers, close talkers, and even women with man hands (not that there’s anything wrong with that). I’ve learned it’s okay to not exactly be confident below the equator, staring at cleavage is the same thing as staring at the sun, and sex to save the relationship is a bad idea. All I ask is that my partners never ask to make out during Schindler’s List, and from time to time accept that there will be shrinkage, especially if I was in the pool.

Seinfeld is the reason I can’t eat JuJuBes or Junior Mints. It’s the reason I know the exact protocol on how to get soup, and why I most definitely don’t trust my mailman. Because when you control the mail, you control information.

It’s the reason I’m writing this post in between naps under my desk, which is located at Vandelay Industries where I work as both a latex salesman and a marine biologist. I swear.

Seinfeld is why I know the difference between nougat and cookie, and that women don’t respect salad eaters. What they do respect is an apartment made up of levels. You know, with steps. Like Ancient Egypt.

Phew, these references are making me thirsty. I believe that’s 24 of them in a row. So congratulations, Seinfeld. 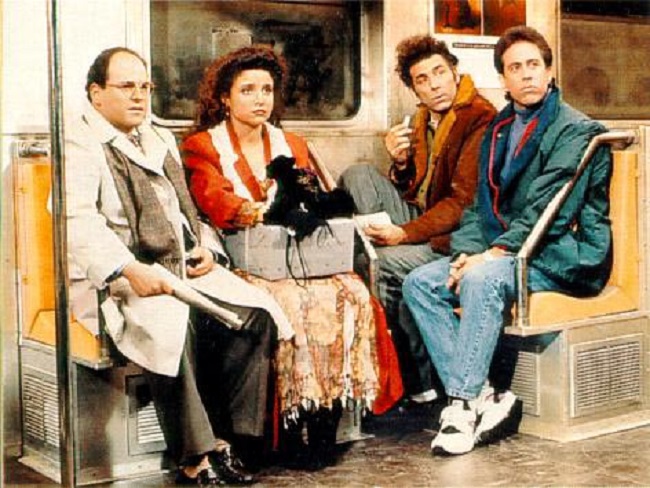