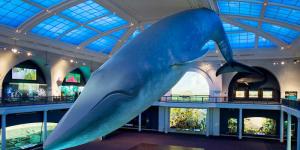 Let us direct your attention to a livestream site set up by the American Museum of Natural History, one of the most beloved and respected art institutions in the world, where you can watch live video of a woman cleaning the sperm whale in the Hall of Oceans. Perhaps you’ve stared up at this scale model of the marine creature and thought, “Well, gosh, how do they clean the thing?” The answers are now revealed. A woman is lifted up on a crane and wipes a giant brush across the whale, removing a year’s worth of dust in giant strides. Then the crane shuttles her from one dorsal to the next. The 500 people currently watching online, the two dozen people ambling through the hall and glancing up — all are entranced. It’s set to the dulcet tones of classical music played on harps, which is cut through every minute or so by cooing whale noises, before reverting back to another pleasant tune. The camera angles shift constantly, like in an NBA game. But this is no basketball game. It’s a woman washing a giant replica of a whale.

If staring at footage of an immobile fiberglass sea mammal getting cleaned is your idea of a fulfilling, productive day perhaps you should get out more.