The pair’s Fairness and Equity Act would reduce public possession of marijuana from a misdemeanor offense to a fine-bearing violation–stopping thousands of yearly arrests, and leaving those caught and charged without a criminal record.

The pols pointed out that New York State decriminalized private possession of marijuana in 1977, but claimed the continued prosecution of public pot possession has led to sky-high conviction rates for youth of color making it difficult for them to obtain jobs and housing later in life.

“It addresses a problem that is not new: The deep and racial disparity in marijuana arrests,” said Mr. Squadron. “The status quo is unacceptable.”

The legislators noted that 86 percent of those arrested for possessing small quantities of marijuana are black or Latino–even though studies indicate whites use marijuana more frequently. Many of those arrested are first time offenders, and decriminalization advocates have long argued the minor offenses set young males up for a life of crime.

Another portion of the bill would create a system for clearing the criminal records of those convicted under the old statute, while another would create stricter standards for what constitutes the sale of marijuana–as the current law classifies anyone who passes a joint as a drug dealer.

Mr. Camara, however, was quick to point out that the new measure would not legalize the possession or use of the drug.

“There are still penalties, there are still fines, you still have to appear in court,” the assemblyman said. “We are not legalizing it, we are just saying it should not be a misdemeanor.”

Among a number of electeds who spoke in support of the initiative, was Brooklyn Borough President Eric Adams–a former police officer–who argued that marijuana use does not speak to a person’s character or career prospects.

The proposed legislation comes just days after Gov. Andrew Cuomo signed a bill legalizing some forms of marijuana for medicinal purposes. Brooklyn District Ken Thompson also announced recently that his office would no longer prosecute people arrested with small quantities of the plant.

Even with the new law, however, possession of marijuana would remain a federal offense. 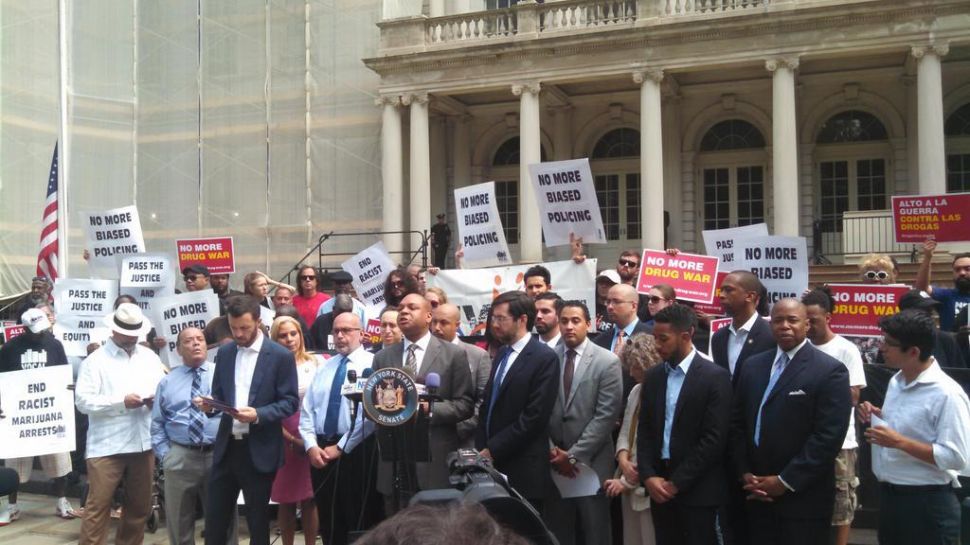