Not that Shindigger is typically bored during the New York summer, but this year wanderlust has dug in its talons, and we’ve found ourselves surveying the cocktail circuit on their favorite destinations and modes of travel.

“I’m a Delta Airlines girl,” Star Jones proclaimed over white wine at Harlow restaurant in East Midtown, during a Turks and Caicos travel event organized by publicist Susan Magrino and the islands’ minister of tourism. “I’m gonna tell you why: Coast-to-coast and internationally, Delta has these sleeper seats that if I get an even row on a window side, there is a ledge and my dog [Pinky, a service animal] has her own seat. I get an extra pillow and Pinky just chills.”

Ms. Jones also praised Emirates, “the greatest airline that I have ever been on in my entire life. You get an apartment, for God’s sakes! You move in to an apartment and they have facial products!”

“I only travel Cathay Pacific, first class,” the noted bonne vivante told us. This summer her destinations include London, Paris, New York, Miami, Montreal, San Francisco and Los Angeles. “I am indulging in a few days’ holidays to visit family,” she explained. “The others are all work.”

Shindigger sought out more advice at the premiere party for Supermensch, a documentary about high-living talent manager Shep Gordon. A seasoned world traveler, Mr. Gordon rattled off a dandy of list in a private room of The Wayfarer restaurant after the screening.

“I love northern Thailand, Chiang Mai, Bhutan, Rajasthan in India, and Tanzania,” he said. “I think that any place that is untouched and where the hand of God is still present is really magical. The Buddhist countries have a magic and a compassion that’s hard to find in Western countries.”

“Depends where I am–foremost my heart pills to keep me alive, and second probably my grass, but I can’t take it everywhere,” he harrumphed, before turning to greet Elvis Costello.

“His sense of adventure is something that I aspire too,” the impossibly sexy Olivia Wilde gushed about Mr. Gordon.

“It makes you want to be a better person,” interjected Peggy Siegal, a hostess of the evening and Gordon devotee. (Ms. Siegal revealed that she would shortly be jetting to Patmos, Greece.)

“[The movie] filled me with joy and optimism,” Ms. Wilde continued, glancing at her fiancé, Jason Sudeikis. “I’d like to go to Maui now. We asked Shep to invite us!”

Not long afterward, we found ourselves face-to-face with Kit Harington, the dashing star of Game of Thrones, at The Cinema Society’s recent screening of How to Train Your Dragon 2, at the Crosby Street Hotel.

“I haven’t stopped this year since January,” Mr. Harington declared, “and I’m coming to the point when I need a fucking holiday, man! I’m gonna go to Italy. I’ll rent a sports car and drive around beaches and sort of unwind for a solid week-and-a-half and just chill.”

We suggested he fly with Cathay, first class. 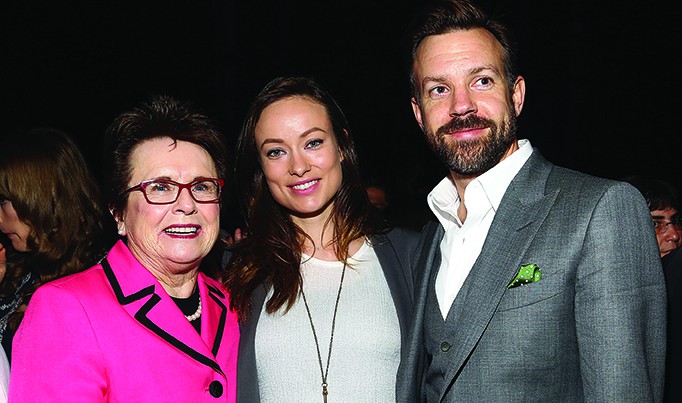