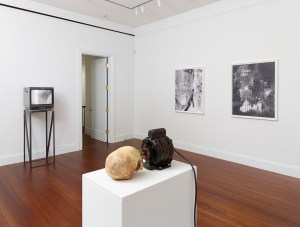 The technokinetic cranium imagined by Jenny Jaskey and Andrea Neustein looks down over 66th Street and is, like the inside of an atom, unnervingly empty; its pieces are still even when they’re moving and look slippery when they’re not. Dennis Oppenheim’s video Disappear, in which a hand shakes frantically in front of a gray wall to a voice, often doubled and overlapping, that insists, “I don’t want to be able to see myself anymore,” faces an untitled motor by Michael E. Smith, which rapidly spins the broken-off nose of a brownish, dry and upturned skull, close-set and waiting patiently. (What does it mean that the shape of a head is more sympathetic than its mechanism?) Cooly ignoring the motor’s loud hum are three silver prints by Eileen Quinlan: Withers Landline, the half-expunged impression of a way we used to talk; Mold Remediation, in which an appalling whiteness eats Venetian stripes into a dumbly resistant black; and the smokily translucent Language Acquisition.

Downstairs in the cyborg’s body, Nina Canell’s (Near Here), a thick, stubby section of high voltage electrical cable embedded in clear acrylic, continues the question of what an instrument of communication can mean—or even whether it can exist—when not communicating; Dead Air is a clear ant farm half full of “coagulated air,” the powdery white, next-to-nothing material used to insulate spacesuits; and Another Mender, seven nails drooping suggestively from a magnet in the wall, unsettles by understatement. And three handsomely evocative untitled canvases by Ryan Estep, on each of which is visible an offset fraction of a black rectangular outline about the size of the canvas, explain why it’s so hard to pin down the ghost in the machine: all our meaning comes from imprecision. The show continues in L.A.