“The cinnamon challenge” once captivated the viral video lovers, but it seems things have escalated.

A teenager was seriously injured after lighting himself on fire attempting a “challenge” that’s been popping up across the Internet.

After seeing videos of “the fire challenge” on Facebook and YouTube, the 15-year-old Kentucky boy poured alcohol on his chest and lit it on fire. He suffered second-degree burns, according to Bustle.

“I just poured alcohol on it, and lit it, and it just automatically went and burst,” the teenager told Lexington’s WKYT-TV.

When the station asked why he participated in such a stunt, he replied, “I don’t know. I wasn’t thinking, really.”

In another recent, more tragic case, a 15-year-old from Buffalo, NY died participating in the stunt.

Although playing with fire isn’t necessarily the newest of past times, the lure of a “challenge” and the virality of such videos is pushing along what is clearly a horrible idea.

A YouTube search for “fire challenge” garners pages and pages of results with titles like “Fire Challenge Gone Wrong! Teen almost burned to Death” and “Fire Challenge Fail!” — as if there could be a “win.” Seeing friends post their own videos on Facebook gives teens the feeling that everyone is doing it and that maybe they should too.

Challenges can be fun, but please stick with the safe ones. 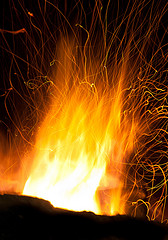