A rose to Andi for arriving in the gorgeous Dominican Republic (which she insists on referring to as “the Dominican”) for her one-on-one date with Nick, and declaring that Priority #1 for her is to grill him about his past breakups — specifically, why his version of events is different than the one given to her by his family members. While I can think of about a thousand rational explanations (his family wasn’t in the relationship, Nick was, so perhaps they don’t know the full story being the first one that comes to mind), I like that Andi’s idea of a cool hangout on a tropical vacation is cross-examining one of her three boyfriends. She really is a lawyer!

Another rose goes to Andi for objectifying the dudes so much all season. “He’s got a body on him,” she says of Nick, and while your feelings about the last three guys may vary, it’s been kind of funny to see a lady brag about how hot her harem of dudes is. Andi also says “It’s like an adult romance with Nick,” which is hilarious. Who would have thought the narrative of the season was that the nerdy, unassuming guy (Nick) has ended up being the sexy evil one, while the uber-jock Josh M. seems like kind of an impeccably groomed basket case?

A rose to Nick for the truly astonishing mental acrobatics he went through in justifying why he wasn’t “ready” to declare his love for Andi, even as he said in multiple ways and in multiple locations that he loved her. It was exhausting to watch, so it must have been exhausting to live through. He is so twisted up in knots about it that he had to jump the gun and give Andi an illustrated fairy tale book about their relationship. Usually the Hail Mary art projects are saved for the finale. The story is long enough that it requires Vaseline lensed flashbacks and a summarizing voiceover from Andi, and after all that he still has to hide behind a tree and warm up with a bunch of “I love x personality attribute” before he spits it out. Finally! Also a rose to both of them for how quickly they kicked the camera crew out of the fantasy suite.

A rose to Josh for A. speaking decent Spanish, B. speaking Spanish decently enough to joke with the locals about needing an aphrodisiac for the evening, and C. leaving it all on the floor with his dance moves. I fell in love with Josh for maybe the third time this season — for whatever reason, I can’t make it stick, and I think Andi might agree with me — but way to peak at exactly the right time. He also does some deal-sealing at dinner when he gamely talks about parenting and handling Andi in her more “difficult” moments. A rose to Farmer Chris for still trucking along on this stupid show even though there’s less of a chance of him winning than Josh ever playing professional baseball again (womp womp). Despite a successful hometown date, no one can deny he’s flown under the radar to make it to the final three. “I don’t know if my relationship with Chris is at a certain point where I’m comfortable spending the night with him,” Andi says at the beginning of their date. That, coupled with the fact that they’re horseback riding at a place called Rancho Peligro — literally “Danger Ranch” — makes us sense things might not go too well for Chris.

A rose to all of America for having to watch this date when it’s so clear an ABC intern is already loading Chris’s suitcases onto a direct flight back to Iowa. Andi’s doing a lot of awkward giggling, there’s no swelling music in the background, and — most telling of all — she’s not forcing Chris to confirm his feelings for her. You KNOW you’re in trouble when Andi’s not frothing at the mouth and clawing at your throat, begging you to profess your undying love for her.

We know we handed out a rose for Andi’s outfit, but sadly, no roses for farmer Chris’s. Tight white pants for horseback riding and playing ghosts in the graveyard? Goddammit Chris, this isn’t Europe! Or Connecticut. The only thing we can think about in this scene is that it looks like Chris pooped his pants.

A thousand sympathy roses to Chris for enduring the most insulting break-up this season — or possibly in Bachelorette history. “Chris, I respect you too much to say I’m dumping you simply because you live in Iowa. It’s actually your personality I hate.” COOL ANDI. Chris tells Andi how much he loves her, and Andi makes the same face she made when Cody barfed up his feelings to her at dinner in Verona.

Another sympathy rose to Chris, who somehow ends up comforting Andi as she breaks up with him. Jesus, Andi, just let the man leave! Chris is a beautiful gentlemanly soybean-farming pottery-making angel. CHRIS COME TO QUEENS AND I WILL PLAY GHOSTS IN THE GRAVEYARD WITH YOU.

A rose to the bump-it that’s definitely nestled in Andi’s Suave Professionals-sponsored ‘do during her chat with Chris Harrison.

Also, a rose goes to Chris Harrison’s tan. What a beaut.

Nick and Josh show up to the rose ceremony looking fresh and energized post-fantasy suite romps. A rose to Chris Harrison who walks all the way back up the stairs to make it look like he’s going to get Farmer Chris, and then ~dramatically~ returns with no one. It’s the kind of moment where you know Chris Harrison feels a little bit like god, and he loves it.

Roses to Nick and Josh, who both accept Andi’s roses. An extra rose to Josh because it’s cute how he actually thinks he stands a chance against evil mastermind Nick.

In two weeks, the remaining bros will meet Andi’s family, and Andi will finally accept a proposal from one of them. This season has been a total zzzz fest. At least we have this to look forward to on next week’s Men Tell All: 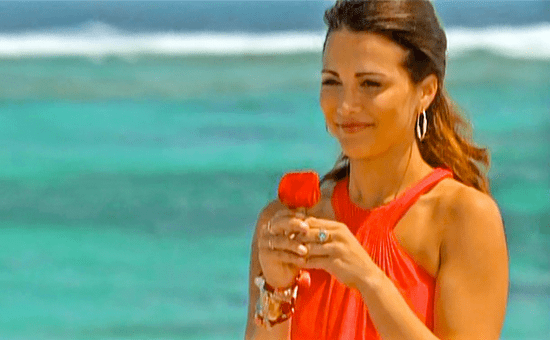