At a time when plays with legitimate dramatic impact are at a shortage and genuine artistry is rare, you can expect just about anything in the theater. But this is New York, and what you never expect is amateurishness. That, I’m sorry to say, is what bleats and belches from the stage of the tiny Rattlestick Playwrights Theatre in Greenwich Village. I’ve seen some startling and memorable plays there. The current occupant, an unspeakable horror called The Long Shrift by a terrible writer named Robert Boswell, is not one of them.

Benign and bereft of any driving force, this is the kind of time waster you can usually chalk up to summer in the city, when marquees are dark and most theatergoers are out of town. But the ubiquitous, peripatetic James Franco is too restless to content himself with starring in a Broadway play and opening in nearly a dozen new movies of varying failure. He has a few minutes to spare. So he directed, ill advisedly, to try his skills at something new and simultaneously showcase some of his actor friends, especially Scott Haze, a lanky, mumbling method actor with sharp cheekbones and one hand mysteriously wrapped in a bandage that has nothing to do with the play. He’s the star of several of Mr. Franco’s endless projects, including the forthcoming movie version of Cormac McCarthy’s depressing Child of God, in which he actually defecates in front of the camera. This has nothing to do with acting, of course, just as the current off-Broadway vehicle has nothing to do with theater of any lasting value.

In the midst of an awful lot of yelling and sour-faced pouting, a tortured mother (Ally Sheedy) and a relentlessly forgiving and unrealistic father (Brian Lally, in his 21st collaboration with Mr. Franco and not afraid to admit it), have been forced to move to a dirty, claustrophobic cardboard dump in Houston after selling their home to pay for the legal fees of their son Richie, who has been sentenced to a 10-year prison sentence for raping a high-school classmate. In their grief, they’ve lost time, reality and each other.

In the next scene, 10 years have passed, although half of them seem to have taken place in a blackout. The mother has died of a broken heart (but not to worry—she comes back later as a ghost). After serving five years of his sentence, Richie is released from the penitentiary when his rape victim recants her story. He arrives, dragging along a surfeit of pent-up rage and festering resentment, with an unidentifiable accent, a permanent scowl and a howling dog that disturbs the neighbors. The girl who destroyed his life after a one-night stand for reasons that are never satisfactorily explained is so overcome with guilt she asks him to the school’s 10-year reunion.

Instead of narrative cohesion, the playwright lulls the audience to sleep with a deadly assault of viscous verbiage similar to the Faulknerian stream-of-consciousness Mr. Franco has drowned us in for three consecutive films. “You wouldn’t have hit me—you would have just hectored me—to smithereens!” What is the term for when “the things that make you happy are the things that make you miserable”? The answer is the “long shrift,” which also turns out to be the definition of “short shrift.” None of this makes any sense, of course, which seems to be a condition Mr. Franco thrives on.

I kept forcing myself to keep my eyes open, hoping to extract some deeper, more important message or moral. But nothing ever surfaced. The abysmal writing is matched by almost unbearably superficial performances. The women shriek. Mr. Lally, as the father, rubs his eyes and talks to his shoes in a whisper that rarely projects beyond the first row. And although Mr. Haze does not defecate in his off-Broadway debut, he mumbles so incomprehensibly that he swallows consonants and runs his vowels together like he’s slurping beer from a straw.

When a man who has spent five years in prison appears at a hostile 10-year class reunion with his rape victim as his date and then strips down to a black tattooed swastika on his chest, you think, “At last! Something’s finally about to happen!” It doesn’t. All anyone does to relate nightmarish incidents is talk about them without actually saying anything, for one hour and 35 minutes of numbingly pretentious speeches. There is no intermission and the bathrooms are closed, so if you do plan to suffer through The Long Shrift, plan ahead.

FROM THE RIDICULOUS TO THE SUBLIMELY ridiculous, head over to the off-Broadway musical Pageant and leave everything behind except your sense of humor. This may be about a beauty contest, but it’s the audience that wins. The six gorgeous finalists competing for the title of “Miss Glamouresse of 2014” in the familiar categories of evening dresses, swimsuits, intelligence and physical fitness are like Miss America, with one difference. They’re all men! The results are outrageous, groundbreaking and thigh-slappingly hilarious.

From an original concept by Robert Longbottom, who choreographed and directed the fabulous Broadway cult musical Side Show, the book and lyrics by Bill Russell and Frank Kelly (also of Side Show fame) and the knockout music by Albert Evans have been filtered through the vision of veteran director Matt Lenz until every aspect of this flag-flying, Rockette-kicking mini-extravaganza crackles and pops with what Kay Thompson used to call “bazazz.” From the opening number (“We are natural-born females/By nature we’re endowed/and we’re proud, proud, proud!”) to the surprise finale—calls for advice from TV viewers on the “expert beauty-crisis hotline”—there’s a laugh a minute awaiting summer audiences badly in need of some.

The cast is splendiferous—from John Bolton and his pretty-boy takeoff on Bert Parks as the pluperfect emcee with the fast patter, lacquered hair and noxious smile, to the contestants themselves, each and every one a winner. These guys must have been cast for their shapely gams and undulating thighs because they’ve got legs for days (think Cyd Charisse).

I was embarrassed by how much I roared at Miss Bible Belt (Curtis Wiley), the black girl with orange hair whose goal in life is to spread the gospel through telemarketing, and poker-faced Miss Great Plains (Nick Cearley) from Keokuk, Iowa, who is writing a cookbook of recipes using Marshmallow Fluff and is never happier than when she’s breeding cows. Statuesque Miss Texas (big butch Alex Ringler) has a double major in home economics and cancer research, and does a show-stopping tap dance with white fringe cowboy boots and flaming six guns borrowed from Ann Miller in Texas Carnival. Miss Deep South (Marty Thomas) warbles her off-key soprano as an antebellum plantation belle singing “Camptown Races.” Miss West Coast (the libidinous Seth Tucker) lives on the San Andreas Fault and manages to survive long enough to do a ghastly interpretative modern dance trapped in a yellow sheet (a send-up of the wacked out Pilobolus dance company). And the Latina in the banana split is Miss Industrial Northeast (Nic Cory), who talks like Rita Moreno’s Googie Gomez, plays “La Cucaracha” on a hot accordion and studies hairdressing by mail.

When they’re not kicking up dust and sending the audience into spasms of musical delight, they demonstrate the sponsor’s god-awful beauty products, including Hair Aware with Air Repair and Smooth as Marble Facial Spackle, which works “the same way you fill in cracks in sheet rock.” The audience is part of the show. Judges are selected from people on the aisle, guaranteeing there will be a different winner every night. Pageant flirts with satire, and beauty contests are easy targets. But the musical adds a colorful new dimension to old territory. This time everyone is crowned a queen—in more ways than one. 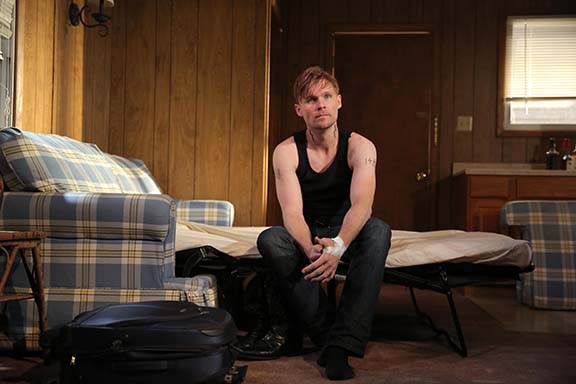