Amidst a storm of accusation, the much-loved New Amsterdam Market, home to a bustling, vibrant community of local vendors, announced its closure Monday. Located in the Old Fulton Fish Market, the market had hoped to celebrate and revitalize the historically significant site, serving as a cultural and economic hub for the area, Gothamist reported.

The site will now be redeveloped by Dallas-based corporation Howard Hughes. The proposed plans outline an entire redesign for Pier 17, and include the construction of a marina, a drive in movie-theatre and two food markets.

Robert LaValva, founder of the New Amsterdam Market, released a strongly worded statement that not only lamented the loss of the area to Hughes, but accused elected officials, specifically Margaret Chin, of betrayal.  “I was never able to raise the funding or attract the influential backers needed for our organisation to thrive,” wrote Mr. LaValva. “Furthermore we were dealt a mortal blow in 2013 when Council Member [Margaret] Chin, who had long professed to support our cause betrayed the community in favour of suburban shopping mall developer, Howard Hughes.”

Ms. Chin, who is listed as a donor and supporter on the Market’s website, lashed back at Mr. LaValva, telling Gothamist that she was “deeply disappointed” with his behaviour.  She claims that LaValva sent the email without support of his fellow board members, among whom are April Bloomfield of The Spotted Pig and writer Paul Greenfield. She argued that the story of her alleged betrayal “might make for an attention-grabbing email, but it’s not the truth.”

It is clear that in the midst of these unpleasant battles, New York has lost a gem, or, to use Mr. LaValva’s words, it has lost “one acre of beloved and irreplaceable public space.” 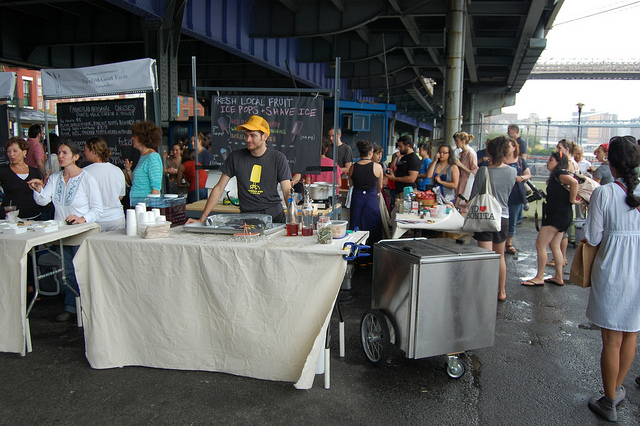