Let me say this for last night’s episode of The Leftovers: it was smart to move the storyline away from Crazy (for bagels!) Sheriff Kevin and shift it towards another townsperson, in this case, Reverend Matt. The episode was self-contained and even made some sort of sense, in it’s own way, leading me to believe that Damon Lindelof has pulled a Jenji Kohan and is using Justin Theroux as his Trojan horse. Because, okay, we start off with Reverend Matt cleaning his church and then telling his sparsely attended flock some parable about a boy who wants all the attention and then is stricken with cancer, and a girl named Emily who is in a coma. At least, I think it’s a parable? It just seems like a weird story, but if you tell one to your congregation, I’m pretty sure it just counts as a parable, no question asked. Reverend Matt’s story must not have gone over well, because as he’s finishing, a guy walks in and  straight up punches him all over. Why??

Oh, it turns out because Reverend Matt is the guy going around and putting up all those signs questioning the idea of the 2%-alypse being the Rapture by listing all the sins of various people who were “taken.” Like the lady on the sign that gets stuffed into Rev Matt’s mouth sold Percocet to college kids, so no heaven for her!

Rev Matt is in the hospital having his head checked while a cop played by the guy who plays all the cops interrogates him. Then Sheriff Crazy Bagels shows up, and there’s some sort of weird relationship that’s gestured to, involving Sheriff’s Crazy Bagel’s crazier dad, the former Sheriff Crazy Bagels, and Reverend Matt.

Then Rev. Matt takes the elevator and this happens: “Guess you and me, we’re going to the same place,” says Reverend Matt to the sad lady clown. It’s all very “Room for One More” and now I have nightmares 4eva. Thanks, Rev.

But just when we’re getting ready to give up on this show, because life is just a box of womp womps, Reverend Matt finds out that Emily, that girl in the coma who I guess was real and not a parable, woke up and went home! Just like he prayed for! Maybe god IS real?

Back at church, Bargain Basement Patrick Wilson shows up to get his baby baptized. As payment, BBPW tells a story about a guy who gambled away his kid’s college fund but also got taken. Everyone telling stories today! Rev. Matt goes to verify this tale (because that’s what men of god usually do, make sure they have all the facts straight) and get another name for his non-rapture argument. He goes to a casino and tries to convince a pit boss who lost his niece that she was on the same “list” as a child rapist/murderer. In an effort to…what? Prove that a man disappeared on the non-Rapture? Blegh, this show.

“Someone has to expose these people for what they truly were and what they truly did,” says Reverend Matt. “Because if we can’t separate the innocent from the guilty then everything that happened to us, all this suffering, is meaningless.”

Pitt Boss: “I think I know what happened to your face.”

The Pitt Boss agrees to help, at least until a bigger crisis occurs moments later when a bunch of pigeons show up on the roulette table. I’ve been to Atlantic City and know this has nothing to do with rapture: those birds are everywhere.

On his way home, Reverend Matt is trailed by the GR, and he’s like “Tell patty I made it this far, I’m not going to turn around now.” Sure, those chatty Kathys (Geisses) will pass that message along ASAP, as soon as they can find some more moleskins.

Bring bring! Reverend Matt gets a phone call. It’s the bank, telling him that his church, which apparently he’s been using for free, has been bought by someone else. Under the terms of this totally not dubious deal, Reverend Matt has 24 hours to come up with $135,000 (plus one more dollar to outbid the other sellers) in order to keep his parish. LOL banks + how they work!

Reverend Matt goes to hang out with Nora, the woman who lost all her family in the 2%-alypse. She asks after someone named Mary, and that’s when I realize Reverend Matt is not a priest, because d’uh, wedding band. Nora and he might be siblings, I don’t know, they say “I love you” a lot, but frustrated, the way people you kind of hate say it. Reverend Matt asks Nora for money she got from fund when her family disappeared. She tells him that in exchange, he needs to stop making posters.

“People need to punch you in the face,” Maura retorts. Haha, love that Maura. She’s always breaking cups and stashing guns and telling off reverends/possible brothers. <3 her.  Matt thinks the non-Rapture was a test, and Nora is like “If it’s a test, you are failing it.” #RaptureBurn So then to prove to her that this was definitely NOT the Rapture, Reverend Matt tells Nora that her husband was having an affair with the preschool teacher. Yikers island, good luck getting that check now, buddy. He’s blown it, so with a “Love you too!” the good Rev dips.

It turns out the Reverend’s wife is bedridden and can only move her eyes and he doesn’t have enough money to pay the nurse and COME ON, THIS SHOW. Rev. Matt goes to dig up something from the grounds of Sheriff Crazy Bagel (Sr.’s) house, but Sheriff Crazy Bagels (Jr.)’s ex-wife is there. They both kind of agree to pretend not to see the other acting like a creeper. Reverend Matt uncovers a Jiffy peanut butter thing with one of his posters about a judge and a bunch of Monopoly-looking cash and on the back it says “Rev you deserve this,” and wait, this is when the show gets absolutely BANANAS. So after seeing pigeons at a stoplight, Reverend Matt goes back to the casino and bets all the money he just found digging in the former Sheriff’s backyard–$20k–on red at the roullette table he saw pigeons at, earlier. And what do you know? He wins! And then wins again! And again! And again! Now he has $160,000: more than enough to save his church! So God DOES exist! Okay!

As he’s leaving with the dough, another guy at the casino tries to rob him and Reverend Matt hits the guy in the face until he is (presumably) dead. Uhhh…okay. As Reverend Matt is driving back to rebury…something, I guess…and steal a street sign…Captain and Tennille’s “Love Will Keep Us Together” is playing and the whole montage is so amazingly goofy and WTF that it gets a pass.
[youtube https://www.youtube.com/watch?v=xjloX_EvYiI]
But, okay, so then? Reverend Matt sees a GR get hit in the head with a rock from some mean people in a jeep and tries to help them but then HE’S hit with a rock and wakes up and back at his church, where Kathy Geiss is wearing normal clothes and handing out God pamphlets, or whatever it is you get at the door when you go to church. Also, the church is full and everyone is singing, so obvi, it’s a dream. Reverend Matt is officially having the craziest day ever. He dream-sees a little boy, who leads him to a door, behind which is a flashback where a doctor tells him “it’s spreading.” Cancer, maybe? Oh wait, is he the boy in the beginning in the story, the one with cancer? That was definitely him. Then there’s a burning house and Baby Nora is like “are people burning in there?” and RM is like “Yes.” We know this is also a flashback, because Nora mentioned something about her dad’s house burning earlier. Sorry, I didn’t think it’d be relevant.

Then Reverend Matt is the passenger of the car that gets hit outside the laundromat at the beginning of the series. Everyone is screaming again, so THAT’S fun. We find out that this caused Mary, RM’s wife who was driving the car, to become an almost-vegetable. But then Reverend Matt is having sex with his wife in his bed and looking at his weird art and his wife is like “Will you persist?” And then she freakishly turns into Sheriff Crazy Bagel Jr.’s ex-wife, and then Reverend Matt’s hands are on fire, and never mind, THAT’S the nightmare I’ll be having tonight.

Reverend Matt wakes up in the hospital and rushes back to his car, where his enveloped money remains miraculously untouched. He races to the bank, where his sympathetic buddy tells him that he’s too late to buy back his church…because it was sold three days ago. Reverend Matt was asleep for three days!! This is like the most depressing Twilight Zone ever. The bank is like “Sorry, they took possession yesterday,” and RM is like “They??!?!??!” And we all kind of know who the new owners are. YUP IT’S THE GUILTY REMNANTS, WHOSE RELATIONSHIP WITH THE REVEREND IS HIGHLY AMBIGUOUS!

Reverend Matt goes back to his church, where the GR are throwing out bibles (don’t do that,) and taking down his signs. Reverend Matt trades weird stares with that Patty lady. Credits roll.

Conclusion: There is a god, but it’s Alanis, and she’s singing “Ironic.” 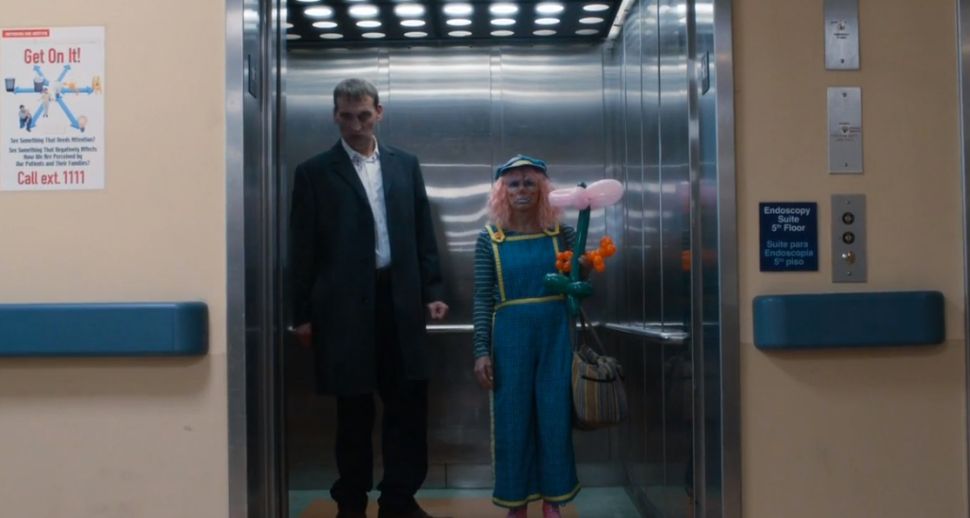