(Note: Sorry for the delay!)
The opening of this week’s Leftovers: Kathy Geiss and the incestuous sister from True Detective (Patti) are just staring at each other for awhile. Then Young Jessica Lange (YGL or Laurie) and Geiss go around town, smoking and bumming people out with their vague acts of vandalism, like painting newsstands white. An old man calls them a cunt, and then he falls to the ground and they just watch. Then they go smoke by a gas station, which seems dumb, and then someone kidnaps Ms. Geiss and she just DROPS THE CIGARETTE ON THE GROUND. That whole place is going to go up in flames.

Patti bangs pots and pans and alerts the rest of the GR that … something happened. Also, I am starting to agree with Lilit Marcus that this show did a big disservice with having the GR talk by writing things down instead of ASL. Maybe just a few could have learned ASL? Because in the middle of the night in the woods, scribbling shit on a piece of a paper while looking for your friend’s body is going to be no help at all.

Suddenly a dog barks, and then the dog shooting guy we previously thought imaginary shows up and shoots it, allowing Laurie to find Geiss’ body.

Meanwhile, Kevin can’t find a clean shirt, because this show is nothing without its perfect sense of pacing. He asks Jill if she’s seen them and she says no, but we don’t trust her because she’s a Christmas baby Jesus-stealing little liar. Then her sexy friend Amy comes out in a bra and underwear and demands Kevin makes her coffee. Totes normal, and btw does Amy have parents? Kevin futzes with his motion detector and Patti shows up to write about the murder. Have people have never heard of texting? Also, why did she wait the whole night to report a murder? Come to think of it, wasn’t Laurie WITH Kathy Geiss when she was buying cigarettes? Didn’t she think it was odd when her friend bounced and wasn’t back at their cult fort?

I mean I love wild, plot-ruining inconsistencies as much as the next person, but come on.

Liv Tyler tells Laurie it was inevitable that someone would be murdered, because the GR were reminding people of something they want to forget. Although they don’t really do that, do they? It’s more like they steal stuff during home invasions. It was more evitable than you think, Liv Tyler. Then Laurie, has a heart attack or something, or at least starts hyperventilating, mid-cigarette. Now see: THAT’S inevitable. Everyone is hanging out at the murder scene, being terrible. At least Kevin is like, “Maybe don’t just move the murder weapons?” And all the other cops laugh and laugh, because they are somehow even worse at their jobs than he is. The imaginary dog killer is there, sitting nearby, and a guy walks by and conspicuously says “HI DEAN!” Just in case you were still confused about whether he existed or not. Except why didn’t that cop come forward earlier, when Kevin had an ABP out for a dude matching Dean’s description? This show.

Kevin shows up to Jill’s school, causing her to (correctly) assume her mom’s hurt. But since Kevin doesn’t know that yet, he assures her she’s okay. This is going to be good. Kevin informs her about the murder but tells her not to tell any of her friends, which shouldn’t be too hard since the SHERIFF just showed up to pull his DAUGHTER out of class, and that’s not bound to raise some questions.

Oh, it turns out Laurie is fine, she just had a panic attack and the guy from the hospital just hands her a box of pills. Jesus Christ: that’s the best apocalypse perk thus far. People are just way looser with the ‘scripts.

Kevin is getting reamed out by another cop for not calling the–wait for it–Bureau of Alcohol Tobacco Firearms Explosive and CULTS–and not telling them about the murder. Apparently this is something you are supposed to do because Kevin wrote it in a memo once, but even Kevin isn’t above Kevin’s Law. The mayor says she trusts Kevin (news to us), but he needs to make his case about instituting a curfew before a tribunal or something.

Laurie watches a couple fight about MasterCard miles. Are they meaningless? I don’t know, I’ve gotten far on my United/Chase credit card.

Oh apparently the rest of the world doesn’t know about the GR, maybe they are just an upstate New York thing.

A crazy man with two crazy dogs comes up to Kevin in his car and starts complaining about the “moonies” and Kevin just blows him off because what does he have to do around here to get some shut eye? I mean admittedly this is TV, so as viewers we know there are only so many suspects, but this guy with the dogs might as well have gotten in the back with handcuffs on. This guy literally says, “Don’t investigate TOO hard.”

Kevin is still futzing with his house alarm.

At some random hotel diner, Patti just starts chatting at Laurie, saying that they deserve a “day off” from being mute. Nice little murder recess.

Kevin plays a prolonged game of phone tag with the ATFEC and tries to pick up up his shirts but he doesn’t have a ticket and waaaaaah. Enough already. In line, Kevin starts flirting with Nora about tickets. “They’ll turn up when they least expect it.” JUST LIKE THE MISSING PEOPLE.

Kevin interviews Reverend Matt, who wants to see the body even though he’s a murder suspect. And then there’s town hall/vote thing about curfews, which Kevin and the mayor are PRO, but everyone else in town, especially Dean, is against.

“You don’t even live here!” Kevin shouts at Dean.

“Yes I do!” Dean shouts back. Oh Dean, always causing trouble and/or flying under the radar for several years to the point where no one in town can identify who you are.

The vote doesn’t pass. Kevin informs the GR that the townspeople will be coming with pitchforks if they can’t stop breaking into their homes and stealing their shit. UM FAIR ENOUGH! Also, maybe they should be in jail for that? Like, I’m all for passive resistance or protesting or smoking, but these people are buying up all the land in weird, arbitrarily-determined bank auctions and straight-up Manson-ing all the houses they don’t already own. I’d be pissed, too. He gives them all rape whistles.

Over all-day breakfast, Patti gives perhaps the first rousing speech of the series, describing how Gladys (aka Kathy Geiss) had a son who died in Yemen and was starting to “feel again” out “in public,” which I guess was the equivalent of Laurie’s panic attack? Patti understands the pull of family and past, and how going back seems easy and comfortable, but Laurie can’t have any doubt, because doubt is fire and ash. I don’t know, it was a very good speech. They hold hands across the table. I guess maybe I would like this speech even more if the GR didn’t seem so pointless. What could Laurie possibly be doubting? Her commitment to lung cancer by 50?

Then Patti does something weird: she writes down the name NEIL on a doggie bag and makes weird noises and asks to be excused, please. Okay, Patti you are excused.

Kevin goes over to Reverend’s Matt’s house, where the congregation seems a little bigger since he was hit in the head with a rock. Kevin decides to let the Reverend see Gladys’ body, and in order to not seem suspicious the Reverend starts quoting parts of the bible about stoning people to death.

A stoplight stops working but then it works again. How very Lynchian.

OH MY GOD GLADYS’ body is missing because it was stolen by the ATFEC.  For some reason Patti’s car only plays that song “Your Kiss.” I think she left a bag full of her own shit on someone named Neil’s porch.

Kevin can’t remember his own alarm code, and then the guy from the ATFEC calls. They won’t let him pick up Gladys’ body just so his lead suspect can be alone in a room with the corpse. PAPERWORK, you now? The bureau guys offer to “Eliminate the infestation” with three armed vans full of guys. Haha, these D.C. bureacrats have a weird way of allocating their resources!

“Just say the word, and everything can go back to normal,” says the investigator who can’t free up a body from forensics, but can send a SWAT team to take out one house full of religious wackos.

Drunk Kevin harasses the laundry dude AT GUNPOINT for his shirts, at which point I realize that this is Sheriff Crazy Bagels all over again. Every week, it’s some new arbitrary thing for him to find! At least he got his shirts back.

Reverend Matt gives a microphone impromptu speech outside the GR about loss and grief. I guess the thing about the GR is that they don’t grieve? Except they are all about grieving and remembering the past. Laurie blows her rape whistle on him.

Kevin disarms his home alarm system and tells Jill that he and Laurie are getting a divorce and no one could be less surprised.

In an ATFEC warehouse, we see that there are all these dead bodies all laid out in a room, including Gladys’, and then they go in this incinerator on a really long conveyer belt. Proving that … something. Some fucking thing. Or another. 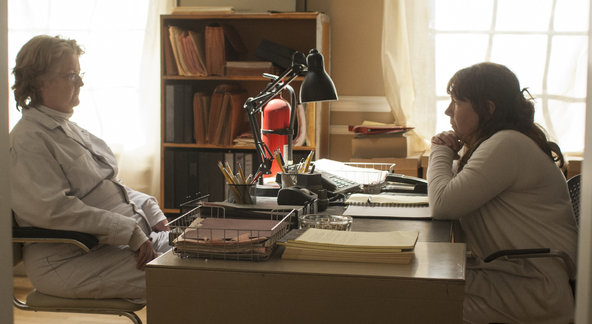