JERSEY CITY – Gov. Chris Christie doesn’t have the temperament to be President of the United States; the stain of former Gov. Jon Corzine makes it hard for a self-funding Democrat to win statewide; Hillary Clinton’s still his candidate for president; and when they see each other, he and Steve Sweeney actually discuss something more strenuous than barbells – all points of view packed into an hour-long interview Jersey City Mayor Steve Fulop gave to PolitickerNJ this afternoon in the wood-paneled office formerly occupied by Fulop’s predecessor Frank Hague.

A brace of Clydesdales just arrived to the city to help celebrate the 4th of July, the town was gearing up for festivities tomorrow, and the Gerber Baby-faced picture of Fulop on the cover of a magazine – the same one that infamously sent Sweeney into twitter bully mode – sat on a coffee table in the mayor’s office where the U.S. Marine himself appeared in shirt-sleeves with one year in office now under his belt.

As they play an ongoing game of chess in search of higher office, Fulop and Sweeney have kept on each other’s bad side for the most part, but the malice doesn’t seep into their private encounters, the mayor insists.

“I have a friendly relationship with Steve Sweeney,” Fulop said. “Whenever I see him we talk about policy stuff.”

His relationship with Christie is a little differerent.

“I haven’t spoken to Gov. Christie since the swearing-in,” the mayor said of the GOP governor with whom he fell out of favor last year during Chrisite’s re-election campaign. “Actually, I did speak to him [earlier this year] at that prisoner re-entry event, but it was just greetings, not a regular conversation. He’s not running for office in New Jersey ever again.”

Does Fulop believe Christie has what it takes to be President?

“No,” he declared without hesitation. “I think that the short answer is no. I would suspect when people start looking and screening they will see that. He’s a gifted communicator, but the Midwest dynamics don’t play well for him. Do I think he has the temperament? No, I don’t.

“Still, he’ll be a hard guy to count out,” the mayor added, acknowledging the governor’s fierce political ambition and work ethic.

Does he support the frontrunning Democrat for President in 2016?

He notes that he helped run the first Hillary Clinton fundraiser in New Jersey, along with others, including Michael Kempner and John Graham.

“I look forward to being part of that,” the mayor said of a future Clinton campaign.

He was just part of another one,  closer to home in fact, the Newark mayor’s election, where he backed anti-establishment victor Ras Baraka.

Now Baraka is trying to find his way on the football field of Essex County politics.

At the county party re-organization meeting last month, Baraka chose not to make an appearance – unlike Fulop, who practically jumped into the driver’s seat of the Hudson County Democratic Organization (HCDO) when he won last year’s Jersey City mayor’s race.

“I think the chairman in Essex has a good relationship with all the factions there,” said Fulop, considering his Brick City ally. “The city has a structural deficit… and I think Ras is going to focus on that more than politics. I dont think people should read into it. Ras is a very talented guy. People have made the mistake in the past of underestimating Ras.”

Fulop rejoices in the close ties he has to the new mayor of Newark, and prizes the furnace of urban politics that tested him – first as a councilman who served Ward E for eight years – and now as mayor.

As he makes the rounds of political theater and shows a willingness to engage everywhere there’s a fight, he conversely senses a lack of fiber in the narrative of another possible gubernatorial contender – former U.S. Ambassador to Germany Phil Murphy.

Like Fulop, Murphy’s a Goldman Sachs alum, but, the mayor suspects, that’s where the similarities cease.

“I don’t know Phil Murphy,” he said. “But the self-funder narrative is going to be a tough one in New Jersey.”

Former Gov. Jon Corzine – swatted out of office by Christie in 2009 – made it tough, he said.

“The same way that Jimmy Carter made it difficult for a southern Democrat to win for 20 years, there’s a similar challenge in New Jersey,” Fulop said.

In the midst of his own statewide vibes, he says he feels secure in Hudson right now politically.

“We’re lucky to have the speaker here,” he said, a reference to Assembly Speaker Vinny Prieto (D-32). “I have significant clout with Speaker Prieto.”

“It’s going to be complicated,” Fulop said of 2015. “O’Dea was the first person who backed me. If he runs, I will back him. He’s super smart. He understands government. I don’t know if he’ll go in that direction next year. If he decides to run, it will be competitive.”

In the meantime, Fulop’s happy his freeholder candidate – Gerry Balmir – prevailed in the June Democratic Primary. How that impacts the piercing together of the next 31st District Assembly team will hinge on the collaboration of Prieto, state Sen. Sandy Cunningham (D-31), newly elected Bayonne Mayor Jimmy Davis and Fulop himself, he said.

“Nothing is a foregone conclusion at this point,” he added.

He’s content with the state of his relationships with the chairmen in Bergen and Passaic counties and his ties to Democrats in those key counties.

“I’m looking forward to Roy Cho’s race,” Fulop said of the Democratic challenger to incumbent U.S. Rep. Scott Garrett (R-5). “Roy can win. Roy is going to be a benefit to the entire Bergen ticket.”

“We’re going to be involved on the ground and we already did a fundraiser,” Fulop said.

He can’t, however, vote for Tedesco.

“Menendez is no longer a Hudson County resident,” an almost incredulous Fulop said of the brutally hard-nosed power broker he ran against once in a baptism-by-fire Congressional campaign on his return to Jersey City from Iraq, absorbing the loss to a Hudson icon now removed to the leafy climes of Bergen – the race that started Fulop’s Dantean journey through Jersey City local politics.

No one who ever wanted to be governor got out of Jersey City, a point Terrence McDonald of the Jersey Journal made in a piece this week.

“The facts are the facts,” Fulop said, but noted how candidates of different backgrounds have propelled themselves to Drumthwacket in the last two decades: a freeholder, a mayor, a senator, a U.S. Attorney, a mishmash of narratives that show the potential for anything to happen.

As for right now, today, “We’re mindful,” the mayor said, “that this is our home base.” 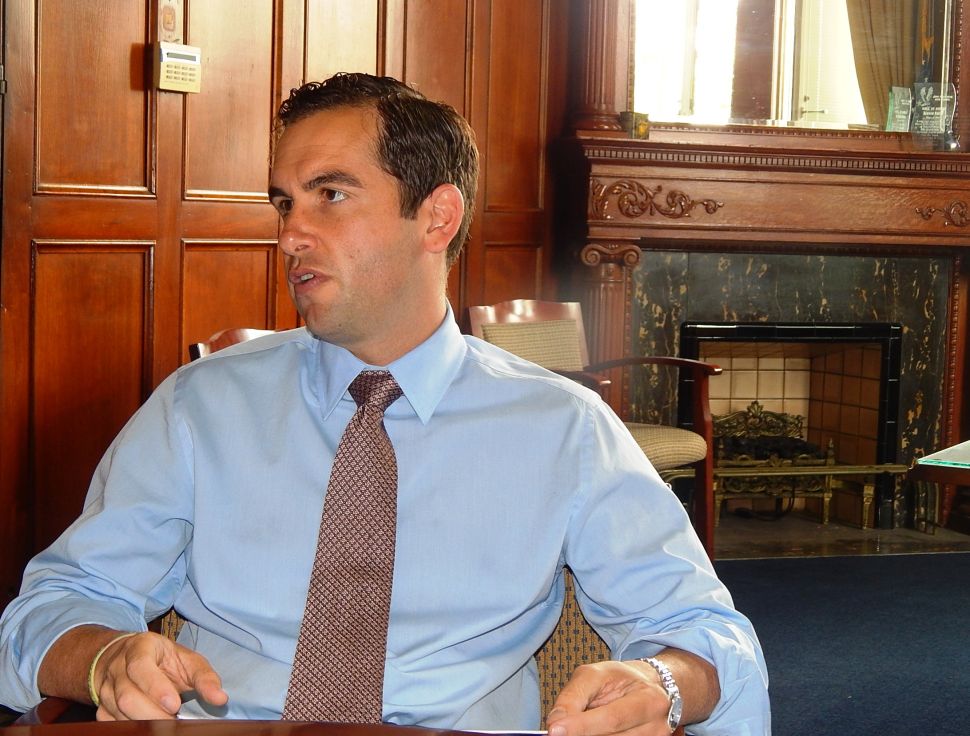