I, along with almost nine million other people in the world, sometimes need some help falling asleep. I’m not ashamed: we all do what we need to do in this world, and if that means popping some Ambien so I can fall asleep before the sun rises, so be it. Sure, I need to watch out for sleep eating and sleep sex (honestly still can’t decide which one of those sounds more alarming), but honestly my biggest issue after several years of taking the medication is my tendency to try to stay up and do work under the influence. Last night, bone-tired but knowing I had to power through, I decided to watch the second episode of Guillermo del Toro and Carlton Cruse’s The Strain while mildly hallucinating. Here’s what I discovered: Under no circumstances, watch The Strain on Ambien.

We start out on Vasiliy Fet: that Russian guy in pest-control. He has a big stick and is very into killing rats. He was also the mercenary guy on Lost who Ben stabbed and it blew up the ship. You remember. I think in the flash-sideways episodes he was holding Sayid hostage? Or, no, Jin. Didn’t he have an eyepatch? Yes. No, that was someone else. But there was something with his eye, right? Man, I miss Lost. This guy, Fet, takes his job seriously, as evidenced by him refusing to take a bribe from a rat-infested restaurant’s manager. This is how you end up with those places without health code letters in the windows. The idea of rat droppings in my food is the most disturbing thing I can think of besides Slenderman and maybe that “lady” from Insidious 2.

Wait no, the other scariest thing is the face of that Nazi-Vampire that visits Abraham in jail to remind him about the Holocaust. They must have designed that mask from The Purge on this guy. His name is Eichorst and there is much discussion about who is going to vanquish who and who killed whose friend/wife back in the olden days. Eichorst (berf, these names!) says Abraham is finally safer in jail and then touches his finger to the glass like he’s going to break it with his mind strength, and there is this cracking noise but the window doesn’t break.

Did anyone else here that cracking noise?

There are four “survivors” of Regis #753, including lady lawyer  Joan Luss and man rocker Gabe. They toast to their survival/impending lawsuit with a fancy dinner where they are drinking , which is just ridiculous but I guess makes it easier to notice that Joan’s backwash is the same color of President Snow’s from The Hunger Games. Later on, Gabe  will have sex with a bunch of ladies and try to eat one of them, like Patrick Bateman. Also, his hair is falling out, which actually seems like a bigger hit to his career.

It turns out you can spell the CDC without the Letter Eph because our widow peaked protagonist has already lost his job because of PERSONAL PROBLEMS like alcoholism and custody battles and vampires. Eph is definitely more disturbed by her ex-wife’s new boyfriend messing with his home office than he is that his son’s main form of communication with him these days is in the form of emojis.

Wait okay, so there are vampire-vampires, like The Master and Eichorst with the lizard eyes. Then there are the four survivors who are turning into vampires (probably!). But then everyone else who was on the plane is already a vampire, but a zombie vampire? That seems like a redundant process: if I was turning people into vampires I would probably skip the step where everyone starts exhibiting symptoms but can still walk in the daylight and alert the uninfected that something is wrong. That is just PERSONALLY what I feel, though, and every vampire is allowed to make proteges or progeny or whatever however they see fit, God bless. There is some fake bill that is referenced I think in this episode, the Mann Health Amendment or something, and it’s so fake-sounding. Like at least True Blood has the word Vampire in its fake laws, because why not. Vampire’s Rights Amendments.

There is some other stuff too: Gus gets into a fight with his brother, The Master has a talk with the Jumanji– guy Mr. Palmer where he gives him that speech from Captain Phillips, basically.

Oh god. I don’t want to freak anyone out but what if I’m actually a vampire? I might be a vampire already because I hate sleeping at night and sometimes I forget to eat. Like, this is a legitimate tweet I had a week ago after a “stomach” bug and I think you can see my symptoms match up perfectly.

A week of being sick sick sick and the first thing I can really keep down is a bloody steak. Maybe *I* am vampire.

Also I am not going to tell you where I learned this, but there is a thing that kids get from slides called pinworms and they are kind of like those things that crawl into you in The Strain. DON’T GOOGLE IT! All I will say is that there were a lot of slides near where I grew up, so there is something creepily realistic about tiny worms “transferring” vampiric infection rather than say a neck bite.

Ew ew ew ew I Googled it! I said don’t do it and then I did. Now I have to look at some pictures of Rat Kings in order to clear those images out of my head.

Fet would hate Rat Kings. Especially if one owned a fancy eating establishment and tried to pay him off because this guy is like the Agent Van Alden of city-hired exterminators.

Hold on I need to do my mantra.

Okay! Welcome back. It’s now 3:31 a.m. and I have made a batch of cookies, but they came out more like brownies. It’s still okay! Everything is okay! This is just a dumb show.

Did anyone else here that creak? 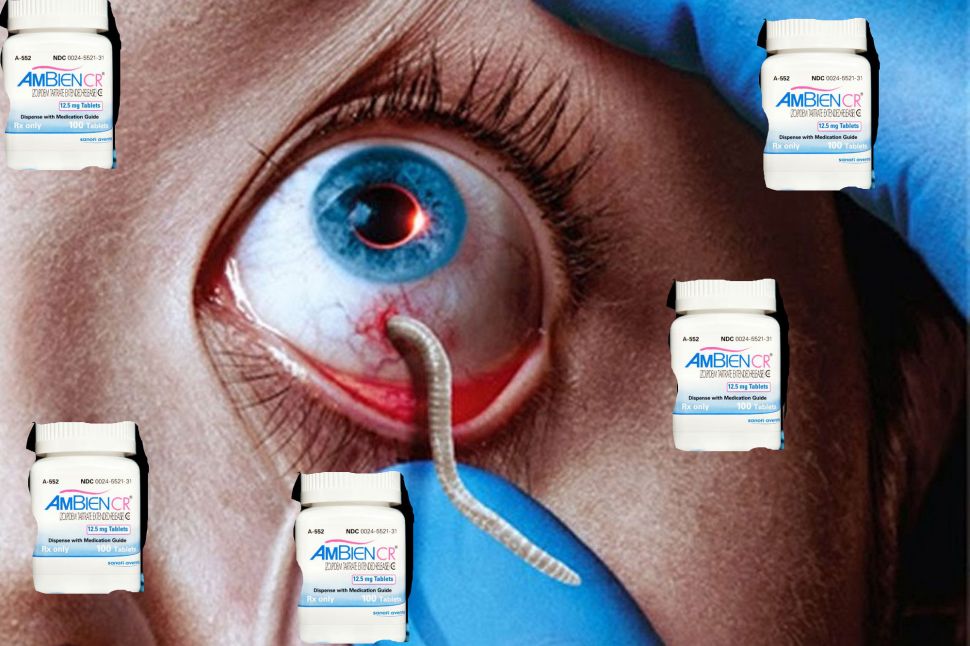