“Hunger can be easily quieted down, easily sated,” begins Holocaust Survivor Walder Frey Argus Filch Abraham Setrakian in a voiceover opening for The Strain. “There is another kind of hunger, an unquenchable thirst that cannot be extinguished.” Already, first sentence out, we’re kind of dealing with the kind of false logic paradox that will come to define Carlton Cruse’s (Lost, Bates Motel) adaptation of Chuck Hogan and Guillermo Del Toro’s non-sexy vampire trilogy. Because another kind of hunger, by definition, is still hunger. So is it unquenchable or easily sated? I guess we’ll leave this kind of metaphor parsing for the big-wigs at the CDC, but hello and welcome to the program.

The Strain exists on the other end of the spectrum from sentimental vampire sagas like the ones you’ll find in True Blood and Twilight, but that creates it’s own set of problems: the book definitely spends about fifty pages describing what a Boeing 777 looks like and how it works, and also what a lunar eclipse is, but maybe half a paragraph delving into deeper character work beyond “Holocaust Survivor,” “alcoholic dad trying his best,” “uppity lady lawyer” or “romantic foiable.” That’s fine…in fact, one almost hopes that this would work better for a TV format, where the story can work as an outline and the characters shaded in by people hired to beef out the hour-long timeslot.

Unfortunately, The Strain falters on that front as well. We open on a plane about to land at JFK, except there is a giant smoke monster that escapes from the hatch and kills everyone but also lands the plane safely and draws the shades. (FYI, minor spoiler, but we’re never really given a clear answer as to why, in this one particular scenario, a vampire seems to have control over technology and/or window shades and/or plane landing procedures. In the book, the closest thing we get to an explanation for this is when one of the vampires learns how to text.)

So now there is this “dead plane” at JFK, a major mystery that no one except Corey Stoll and his hairline can solve. You might remember Mr. Stoll as the doomed Russo from Season One of House of Cards, a role he was fantastic in, or as Hemingway in Midnight in Paris, which was also A+++. Here, his character’s name is Dr. Ephraim Goodweather, leaving Mr. Stoll and his distracting widow’s peak to utter garbled word salad at his court-appointed custody therapist (??) like “She gets Kelly, my son gets Zach, so Eph, please. Or Ephraim.”  Or neither, because neither of those things are believable names TRY HARDER, THE STRAIN. Because Mr. Stoll and his wig are very good at playing alcoholics, let’s just go with that: he’s an alcoholic who isn’t drinking anymore, but without Frank Underwood to take him out of the picture, he’s busy being married to his job at the CDC and not to his ex-wife. When he gets a call about the dead plane, he rushes out of the counseling session, but not before getting into a bitch fight with the guy who pretended he’d watch Eph’s car when he double parks to avoid getting ticketed. It turns out the doucher didn’t do that, and also he is Stoll’s wig’s ex-wife’s new boyfriend, so I guess the plane full of dead people can wait while #Shots are #Fired.

Okay, so, onto the plane. Eph and his sexy lady partner, Dr. Nora Martinez meet up with Samwise Gamgee at the JFK tarmac, along with some other government teams. Since the event or whatever happened so quickly, some dude in charge wants the CDC to take a backseat, but no can do, Mister. Eph quickly takes control of the situation by asking the man how many times he touches his hand to his face, because he is our mom and that is how you get diseases. “You don’t like terrorists? Try negotiating with a virus,” he says, winning Eph and Nora a first class ticket to the DeadVirgin DeadAirlines.

Once on the plane, our heroes quickly determine that yep, everyone is dead. Or wait, no. Four people are alive, including a pilot, an angry lady lawyer, a nebbish 30-something named Ansel, and Kevin Smith’s version of what a rock star would look like. Where’s Silent Bob, buddy? Did you leave him in Germany, which is the location from whence the plane took off? (Don’t worry, for The Strain, that is a normal sentence that is not ham-fistedly cramming as much information as possible into a random remark at all.) There is also ectoplasm everywhere, like Slimer finished a 9-hour bukaki session all over the place. Reasonably, the CDC wants the victims quarantined. We all saw what happened to Gwyneth Paltrow in Contagion.

Back in a pawnshop, somewhere, Walder Frey is riding out the repercussions of the Red Wedding by breaking the arms of punk-ass bitches who try to rob his store. Then he goes downstairs into his weird cavern and feeds a heart in a glass some blood, Little Shop of Horrors-style. All these worms start shooting out of the heart and make it writhe. It’s straight-up disgusting and you’re like: Here we go, a gross vampire story. I’m so ready.

But before any of that happens the hunter from Jumanji has to get dialysis because he’s super rich and obviously made a deal with some malevolent forces, as evidenced by his visit from a guy with a nice suit and vaguely threatening European accent. Maybe if being a vampire liaison doesn’t work out for this guy, he can get a job working for whomever is trying to kill John McClane these days.

“All my life, I’ve learned what it feels to cross a line, to do things that can’t be undone” says Jumanji after being told that the “cargo” has arrived safely in New York and the four survivors found. “That line, it has been crossed now, hasn’t it?” I don’t know, man, I feel like maybe if you’re boasting about knowing what it feels like to cross a line, you shouldn’t then ask someone if you’ve crossed a line. You know what that feels like, you just said!

So actually no one saw Contagion, it turns out, because the CDC is going to let all four of the survivors go after, what, twenty minutes in quarantine? Because they don’t want to cause a widespread panic. Or a wider spread panic, because everyone already knows there is a plane full of dead people, so honestly what are holding onto four alive people going to hurt the PR optics at this point? But the lady lawyer is pissed, so after some preliminary questioning–where the rock star reveals, apropos of nothing, that he’s wearing a wig in quarantine (seriously though, someone just take away all this show’s hairpiece budget)–the four survivors go home. The government is just going to say it was a gas leak or something. THE END.

Yikes, let’s speed this thing up. Okay: giant coffin found, full of soil, then it disappears and the footage (enhance!) shows a blurry object (enhance!) carrying it away super fast (enhance enhance enhance!). But instead of taking it anywhere cool, the creature just stores the coffin in the back of a van driven by the most shady looking guy at the airport, aka The Mexican Youth With Tattoos. His name is Felix and he’s almost caught by the police, which are setting up checkpoints to catch the giant, blurry coffin-stealing vampire(???) but then Samwise shows up and waves him through and I’m all “Damn, Rudy.”

Walder Frey visited the airport as well, and tries to warn Eph and Nora to burn the bodies on the flight, which showed no signs of decomposing. They almost believe him, until it is revealed that his wolf head cane (made of Valyrian steel, we wager) actually unsheathes into a giant sword. Which to me makes this guy seem more legit, but instead Eph has him arrested because he is a man of SCIENCE. Also, he just got punched in the face during a press conference by a grieving father who lost his daughter on the flight, so he is having a bad day.

There is going to be an eclipse sometime soon, there are a bunch of posters about it in the airport. So that will be important as well, we bet. (Minor spoiler: in the book, it is never explained if/why the eclipse is important, but does spend a lot of time describing people having ominous feelings about it.)

Back at the morgue with the bodies, a mortician is cutting open the bodies from the plane and OH GROSS! WORMS! ALL THE WORMS! He holds up one of those hearts that Walder Frey had in a jar, and all the white worms come out as it pulses alive, and then a worm crawls into this guy’s hand and he digs it out with a tweezer (gross gross gross), only to get eaten by a bunch of reanimated corpses a moment later. (Night of the Living Womp Womps.) Sweet Caroline plays throughout this portion of the pilot, for no reason, going along with the general theme of the program thus far.

Felix calls his mom and deadbeat brother from the van and tells him he’s coming home. There’s that Walder Frey voiceover again about love being the ultimate hunger (sure, just go with it), but this time the context is darker: we see the grieving father from the press conference crying over photos of his little baby girl before a rap at the back door reveals her newly zombie/vampire-fied self has returned home. Overcome by relief, the guy fails to notice how his daughter is severely dead looking, and now has lizard eyes. THE END for real this time.

Look: I am going to give The Strain a chance, if only because it’s refreshing to see vampires as disgusting, infected creatures instead of sparkly, pouting little bitches. But this show needs to pick up it’s game pretty soon and get some better dialogue/follicles. Otherwise I’m turning back to Sookie. 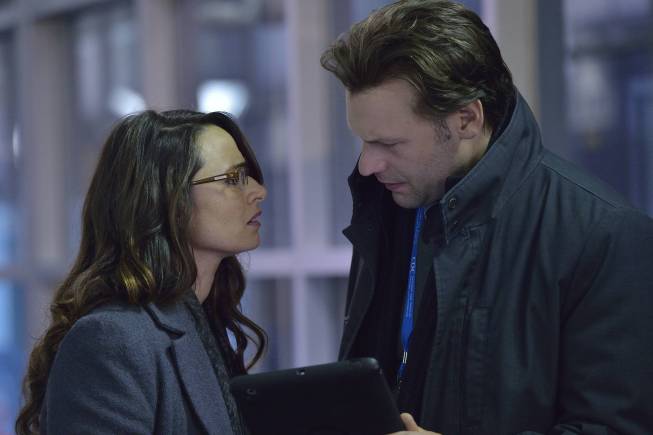